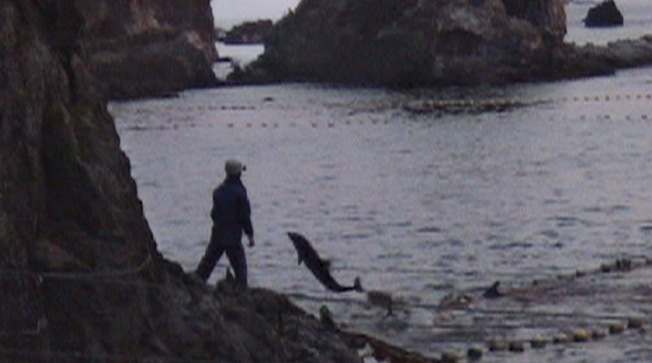 Ric O’Barry is best known as the dolphin trainer for the popular international television series, “Flipper (1964-1967).” However, that was 45 years ago and the former cetacean instructor has long since given up his trade. Now, O’Barry is an ardent activist for dolphin rights and he, with his team of like-minded supporters, travels to Taiji, Japan, to try to set a lifetime of wrongs right at “The Cove.”

At the beginning of "The Cove," we are told that Taiji, Japan is 'a little town with a really big secret.' Dolphin activist and former Flipper trainer Ric O'Barry has made it his life's work to revert the harm he did by making these intelligent, self-aware beings into captive entertainers enduring horrible stress because of their acute sound sensitivity ('they can 'see' right through you, see your heart beating, know if you're pregnant'). O'Barry teams up with filmmaker Louie Psihoyos, cofounder of the Ocean Preservation Society, to expose to the world the horrors that go on in "The Cove." What a serendipitous non-meeting it was when Louie Psihoyos's curiosity was piqued at a seminar where he looked forward to the keynote speaker, Ric O'Barry. When O'Barry was pulled at the last minute Psihoyos contacted him to find out why. That's when he learned that the seminar's sponsor was SeaWorld and that SeaWorld hates Ric O'Barry because if people heard his message, he could shut them down. And so activist O'Barry told Louie about why captivity was so harmful to dolphins. He also told him about Taiji, the source of not only this horror, but of a secret slaughter of the thousands of dolphins not chosen to perform in sea parks or swim with tourists. These unchosen dolphins were sold as food in Japan to consumers who unwittingly bought toxic meat, often mislabeled. .4 ppm of mercury is the recommended limit for consumption. The flesh of dolphins contains 2,000 ppm. What a partner O'Barry has found in Psihoyos, whose filmmaking background combined with his ocean activism provided him with all the right kind of contacts to assemble a super-team to infiltrate Taiji's secured areas. This group includes a former photo assistant, now a mold maker at ILM who devises fake rocks in which to hide HD cameras and mikes, a Canadian Air Force vet who souped up the cameras and provided aerial video via blimp and helicopter, a pair of champion free divers to place the devices and some pirate buddies from the islands who kept guard and scoped the area with thermal cameras while covert operations went on. Psihoyos and his writer, Mark Monroe, have constructed the film well, weaving back and forth from the suspenseful tale of the ground crew in Taiji (a town which looks like Dolphin paradise when entered, images of happy dolphins everywhere!), always a step ahead of the law (as the most recognized, O'Barry pulls the brunt of police questioning as the team sneaks about) and the fisherman who pull out the stops trying to get them to incriminate themselves, and all the background facts. In Taiji, fishing boats create a racket with underwater metal pipes which panic the dolphins so that they can be herded into a natural cove, surrounded on three sides by high cliffs. In order to relate to the creatures, we are told that as far back as ancient Greece, dolphins were held in high esteem. Their brains are bigger and more complex than ours and they are the only other living creature who consistently come to the aid of humans. A surfer activist explains the emotional connection of looking a dolphin in the eye and how he was once saved from a tiger shark by one. O'Barry himself explains that Kathy, the primary dolphin who performed as TV's Flipper, swam into his arms, looked him in the eye, and committed suicide by willfully choosing to no longer breath (she was captive in a sea park at the time). One would think that the film's ending would be its worst segment - the final exposure of the slaughter - and while that is difficult to watch, there is nothing more wrenching as an earlier scene in which the free diving couple walk along a 'legal' area on the shore and witness a horribly injured dolphin who has made it over two nets in the adjacent cove swimming towards them for help. It finally goes under as the couple weep while fisherman laugh and smoke cigarettes in the background. These are the fisherman anxious to get their catch (for the record, a 'performing' dolphin is worth $150,000 whereas a fished dolphin $600) into the school lunch program! Cut to historical footage of the deformed children born in a seaside village in 1956, a rampant 'disease' now known to have been caused by mercury poisoning. We also see Japan's handsome ambassador to the IWC where Japan tries to convince other countries that dolphins are pests ravaging fish food supplies and where they bribe poor countries to support their agenda. This is the same Japan, who, when whale fishing was banned in 1984, would operating whaling ships while crew members held up huge signs like 'whales killed for scientific sampling' to airborne media. It is notable that the activists do not blame the fishermen themselves, but the country's government for not telling its people the truth, a criminal offense in Japan. In the end, this is a film as much about the bravery and perseverance of activists like Barry and Psihoyos's team, and they do succeed in getting their message across. It is impossible to describe the amount of blood in the film's penultimate scene, as fishermen harpoon dolphins jammed in close quarters. A baby jumps in the forefront of the slaughter and one can only imagine its horrified panic - this is a dolphin holocaust and it makes one's blood boil at man's capacity for cruelty. The filmmakers do neglect to tell us how this operation was funded and, just to play devil's advocate, hear the opposition more, or at least hear what the environmental impact would be of not thinning out the herd (not that that would or should change anyone's mind about killing dolphins). But that is not what one will take away from this film. Instead what one will want to know is how to stop this. Go here: http://www.takepart.com/thecove/

O’Barry was the man responsible for the care, training and well-being of his five wards, the dolphins used to comprise the lovable character, Flipper. He loved his work and his animals and the show spawned a phenomenal rise in the number of sea parks around the world. This, in turn, created a lucrative market for live dolphins for this aquatic entertainment industry. Back to Taiji and we are made privy to a plan by O’Barry, documaker Louie Psihoyos and the Ocean Preservation Society to infiltrate the titular bay. Every September, the local fishermen herd the dolphins migrating past the village and select the best to be shipped, live, to all of the aquatic parks of the world – for a whopping $150000 each. But, this is not the reason O’Barry and his team made the trek that could end in arrest and imprisonment and, possibly, torture. They are there to collect evidence that those dolphin not selected are brutally and unnecessarily slaughtered in the secret carnage perpetrated in the Cove. O’Barry and company plan a commando-style raid into the forbidden region – the local Chief of Police and strong-arming fishermen ban outside entry, especially those with cameras, into the killing zone and they have been successful, until now. The extensive planning to pull off the operation begins, though, months before as the team, enlisting the assistance of one of the effects wizards from Industrial Light & Magic, devise clandestine surveillance equipment to capture the annual massacre on video and audio. The attention to detail, like creating convincing fake rocks to hide the cameras, is amazing as they mount their multi-faceted campaign to bring to the world the tiny village’s terrible secret. “The Cove,” though is not just an elaborate investigation of the brutal and unnecessary mass killing of a creature that may be as intelligent (if not more so) than man. It is also an ecological thriller cloaked in a gripping documentary that lays bare a world travesty. The senseless slaughter of these magnificent animals, numbering some 23000 every year, is executed for the sole purpose to sell the meat on the Japanese market. However, this meat is tainted by high, even lethal, amounts of mercury. This knowledge makes “The Cove” all the more poignant and disturbing. It is not only a treatise to save the dolphin; it is also an essay on stupidity.