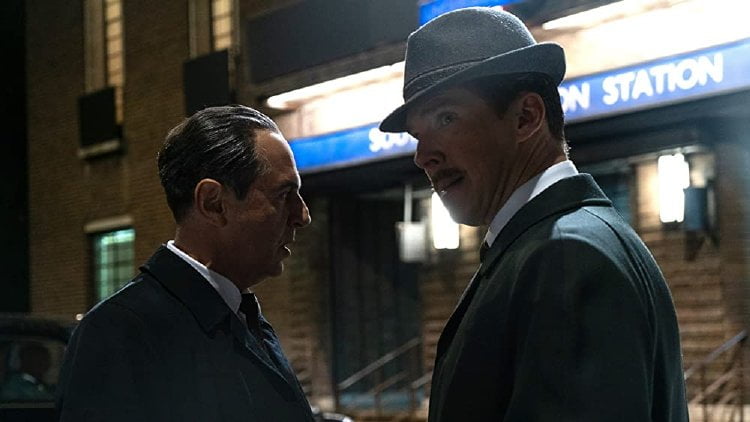 In 1960, English machinery parts salesman Greville Wynne (Benedict Cumberbatch) responded to a business opportunity unaware he was actually meeting with MI-6's Dickie Franks (Angus Wright, "The Iron Lady") and CIA agent Emily Donovan (Rachel Brosnahan).  He begins to cotton on when they probe his willingness to expand his Eastern European travel into Moscow to meet with their trade commission.  Flabbergasted but also a little honored to be asked to perform a service for his country, Wynne agreed to be “The Courier.”

While it is somewhat known that Soviet naval officer Vasili Arkhipov may have saved the world by refusing to fire a nuclear missile at the U.S. Navy during the Cuban Missile Crisis, the tale of Soviet military intelligence colonel Oleg Penkovsky’s (Merab Ninidze) alarm over what he saw as Nikita Khrushchev’s (Vladimir Chuprikov) rash behavior and the ordinary English businessman who would help him get important information about Cuban missile deployment out to the West has been largely lost to history.   Writer Tom O’Connor (“The Hitman’s Bodyguard”) worked diligently to find the truth while director Dominic Cooke (“On Chesil Beach”) finds the balance between personal lives, spy intrigue and the great sacrifices made to maintain world peace.  Cumberbatch, who lost an extraordinary amount of weight to reflect Wynne’s years in a Russian gulag, leaves his genius Super Heroes and inventors behind and convinces as an average man rising to an extraordinary challenge, one which even his handlers tried to dissuade him from.

The fact that Wynne was out of shape, drank too much and never saw action in the war is one of the very reasons MI-6 finds him suitable for their mission as an unexceptional, nondescript businessman is unlikely to raise suspicion.  And he wouldn’t have if a deep friendship hadn’t formed between himself and Penkovsky, causing them to meet too often for Soviet comfort.

Penkovsky, who recognizes Wynne as his contact via a tie clip Emily tells him to always wear, likes Wynne’s unquestioning style, finding him the perfect ‘amateur.’  The two family men bring gifts to each other’s children, but both of their families will suffer for their work for the common good.  Cooke’s depiction of the Wynne marriage is ingeniously rendered via an organic ‘split’ screen as we watch Sheila (a delightful Jessie Buckley) in the kitchen talking to Greville in ‘his chair’ on the opposite side of the wall.  At first, Wynne’s success puts a new spring in his step, one which is reflected back at home in his bedroom, but we learn of an earlier affair and Greville’s necessary secrecy puts his marriage under great strain.

When the spy services learn that Penkovsky is under surveillance, they call an end to Wynne’s mission but Greville insists that they cannot leave this hero to die, volunteering to go to Moscow one last time to deliver plans to get him out of the country.  Emily will not allow him to go alone.  All three will end up picked up by the Soviets, but only Emily is allowed to leave because of her diplomatic status.

Cumberbatch, expressing all kinds of opposing emotions, really carries the film, but support is a strong factor here.  Brosnahan, playing a composite character the filmmakers decided to make female, has a real awards clip reel moment convincing a reluctant Wynne that inaction on his part could wipe out his country in the blink of an eye.    Ninidze is the professional to Cumberbatch’s amateur, at first taking command before relaxing into trust.  Best of all is Buckley, whose sharp wit and playful manner curdles into suspicion, then horrified guilt.

While Wynne eventually does get home, the film’s last act, most of which takes place in a Russian prison, is bleak indeed.  Yet Cooke finds moments of uplift in the audacity required to get in news to his protagonists which the Russians had not only suppressed, but repudiated – that their mission had been successful.

In 1960, English businessman Greville Wynne (Benedict Cumberbatch) was approached by operatives for the British MI6 and American CIA to make contact with a highly-placed Soviet trade official (unofficially a colonel in the GRU) named Oleg Penkovsky (Merab Ninidze). The plan is to glean secret Soviet information, intelligence that will eventually lead to the discovery of Russian missiles in Cuba in “The Courier.”

I love history, period. So, I was a bit taken aback when the story of “The Courier” unfolded and I realized that I knew next to nothing about the men involved, especially that their espionage led to the Cuban Missile Crisis and John Kennedy’s historic confrontation with the Soviet Union. Director Dominic Cooke and writer Tom O’Connor construct the true life story in a way that puts the viewer in the center of the unheralded spy tale.
Do not expect flashy chases and cloak and dagger stuff like old James Bond movies. This tome, by director Dominic Cooke and writer Tom O’Connor, felt, to me, more akin to Steven Spielberg’s 2015 film, “Bridge of Spies” than old fashion 1950’s cloak and dagger flicks. And, things start out in a straightforward manner as Oleg decides to help the American side in the Cold War and passes off secret data to an American student in Moscow.

This information is passed up the line of command and comes to the attention of the CIA and MI6 in the guise of Emily Donovan (Rachel Brosnahan) and Dickie Franks (Angus Wright), respectively. Instead of putting one of their top spooks on the case, they recruit Greville Wynne who is, in his own words, “just a salesman.” Fabricated business in Moscow as a British trade representative places him in touch with Penkovsky and both a professional and very personal relationship begins. I will leave it at that at let the story wash over you like it did me.

The focal characters in this true story are played with nuance and skill by Cumberbatch and Nizidne. The personal affinity they develop is one of trust and the mutual need to make the world a better place. As I watched their story unfold, it was with a sense of belief in their mission and made me sympathize with them on many levels, especially the personal side. And, I got a brand new history lesson to investigate.