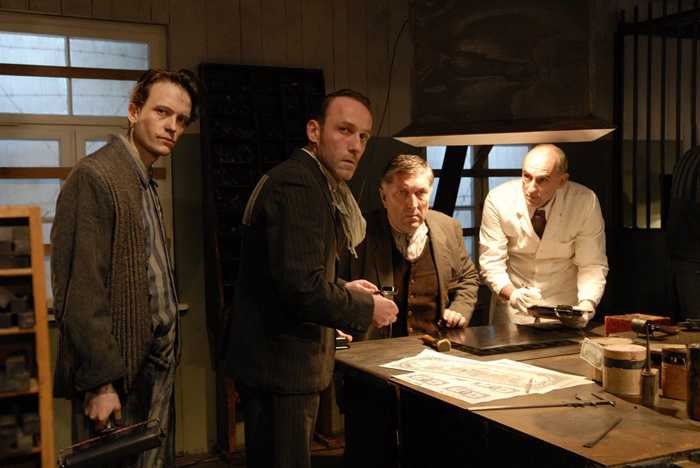 Salomon “Sally” Sorowitsch (Karl Markovics) is a craft master at what he does best – forging money. His luck runs out, though, when police superintendent Friedrich Herzog (Devid Striesow) interrupts an amorous interlude and the Jewish criminal is sent to Mauthausen prison camp. His skills, though, meld perfectly with a 1936 plan by the Nazis called Operation Bernhard – forge billions of pounds and dollars and destroy the enemy economies – and Sally is recruited (without much choice) to be a part of the nefarious plot in “The Counterfeiters.”

This based-on-a-true-story story begins at the end with Sally gambling at a posh casino in post-war Monte Carlo where he, without a care, loses a fortune. Flash back to before the start of World War II and Sally’s arrest and incarceration. Being a Jewish prisoner in Nazi Germany is not a good thing and he is in danger for his life. That is, until he is reunited with his old nemesis Herzog who is now an SS Sturmbannfuhrer and in day-to-day charge of Operation Bernhard. Sally is enlisted by his former foe and shipped off to Sachsenhausen concentration camp, the center of the elaborate counterfeiting operation. In the camp, Sally finds himself a select member of a company of printers, engravers and chemists all brought there to make the plans of the operation a reality. These few are given privileges – good and plentiful food, clean clothing, beds with mattresses and crisp linen and a relatively safe existence – that the other inmates in the camp can only dream of. They are successful in making a viable forgery of English pound notes that pass the scrutiny of the Bank of England. The war is not going well for the Germans, though, and pressure is put on Herzog and his Operation Bernhard team to create a convincing dollar forgery. The pampered inmates keep finding excuses for their failures to create realistic looking greenbacks – “a problem with the gelatins” being the oft-repeated one – until Herzog threatens to execute five of their number every four weeks until they comply. One of the prisoners, Adolph Burger (August Diehl), is of the mind, though, that revolt and rebellion, and refusal to provide the much-wanted product, are necessary. To the rest, it is put up, and maybe survive, or don’t, and definitely die. The Counterfeiters” is the kind of story that exemplifies the concept that fact is stranger than fiction. I knew of the Nazi plot, not in detail though, and sophomore director/scribe Stefan Ruzowitzky, adapting Adolph Burger’s book, brings it to human life. He is helped, greatly by his fine cast led by Karl Markovics, as taciturn Sally, Devid Stiesow, as the ambitious Herzog (who insists he is not a Nazi) and August Diehl as the moral and rebellious Burger. The capable supporting cast gives the background characters full dimension, especially Martin Brambach as the cruel and murderous Hauptscharfuhrer Holst, a man who takes pleasure in his god-like power, executing prisoners with brutal dispatch. The Counterfeiters” moves slowly in the first half but improves markedly in the second. The latter is the meat of the film and is what makes it worthy of its Oscar nomination for Best Foreign Language Film. There are several foreign language films that, to me, were neglected this year but this one is a worthy entry from Austria. The attention to the small details is exemplary and puts the viewer in the midst of this compelling drama.