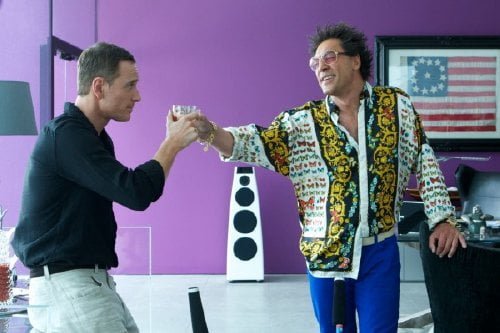 A lawyer (Michael Fassbender) decides to dabble in a one-time deal in the lucrative business of drug trafficking. He is unprepared, though, for what his commitment means to the denizen of the powerful drug cartel that will supply the illicit drugs. Soon, he finds himself in way over his head when things begin to go woefully wrong for “The Counselor.”

He's head over heels with the woman he wants to marry and life is apparently good, but a little thing called greed chooses just this moment to unravel everything in ways he could never have imagined for "The Counselor." Novelist Cormac McCarthy has a particularly bleak world view, one so dark that his recent post-apocalyptic novel 'The Road' might actually be considered one of his most hopeful works. But here, making his screenwriting debut, only a central love story rises above the very worst of humanity in a tale so loose limbed parts of the plot have almost been amputated. Director Ridley Scott ("Blade Runner," "Prometheus") features a stable of supporting actors he switches in and out for one scene cameos, many of them giving more intriguing performances than his star. As the unnamed counselor, Michael Fassbender has never given us less to hang onto than he does here, only his completely innocent fiancée Laura (Penélope Cruz, "Vicky Cristina Barcelona") and his raffish partner in crime, nightclub owner Reiner (Javier Bardem, "No Country for Old Men"), engendering any sympathy. After a tender, light-filled, sheet-covered opening sex scene which establishes Fassbender and Cruz's romantic infatuation, we're thrown out into a Mexican field where Reiner is indulging his lady love Malkina's (Cameron Diaz) identification with cheetahs (she has a torso length spotted tattoo and metallic talons to advertise it). A cheetah pounces on a bunny and when Malinka later sizes up Laura's engagement ring, the metaphor couldn't be clearer. As is usually the case with the villain, Diaz mostly steals the show here. Looking like the lesbian love child of Angie Dickinson and Ellen Barkin, we know this well loved woman is only tending to her own agenda. When the counselor meets up with his deal connection Westray (Brad Pitt), he learns that he and Reiner shared 'a love of exotic women.' But while Westray chooses his words around Malinka carefully he couldn't be clearer trying to warn the counselor away from the deal, telling tales of mechanized bolos which decapitate in mere minutes and films which make one an accessory to murder by merely watching them. So just why does the counselor proceed? One could guess that it's the same reason Reiner's in - to support the love of a woman, the counselor having traveled to Amsterdam to pick out a very special diamond (as the dealer, Bruno Ganz's ("Wings of Desire") explanation of his wares is a philosophy that can be applied to more than carbonized coal), but that might be reading too much into it. The deal itself is never proposed, only discussed around its edges, the various people coming in and out of the mix almost tangentially. Why cast Toby Kebbell ("Control," "The Conspirator") as a disgruntled former client in one scene that goes nowhere? "Che's" Edgar Ramirez as a priest irritated by Malinka's attempts to get a rise in the confessional? John Leguizamo AND Dean Norris for another sick joke as two characters in the middle of the cartel to consumer trail? Rosie Perez ("Fearless") gets two scenes, although only one with dialogue, but she makes you wish there were more of her and she has a clear connection to her lawyer's future morass. As the drug lord, Rubén Blades ("Safe House") may only appear once, but he delivers the entire movie's theme - that once you've made a deal with the devil, you are no longer living on the same plane. The counselor should see another red flag, although it isn't as clear cut as Westray's and the person giving it - Reiner - is clearly warning himself. His tale about how Malinka 'scared him to death' by having sex with the windshield of his yellow Ferrari is the film's giddy highlight, at once preposterous and portentous. Bardem works his happy, funky exterior (does McCarthy write for this actor's hair?) with an underlying mix of fear and desire. Ridley Scott's directed this hop-scotching descent into hell as an almost larky adventure before the inevitable foretold darkness creeps in. The film's like an elite distant cousin to Michael Bay's "Pain and Gain." McCarthy's deaths are never pretty, but here the nihilism is as casually kicked off as a coin toss.

What can I say? A Ridley Scott film from an original screenplay by novelist Cormac McCarthy and starring Michael Fassbinder, Brad Pitt, Cameron Diaz, Javier Bardem and Penelope Cruz cannot miss, can it? It can and I sum it up “The Counselor” in one word: disappointing. Cormac McCarthy’s books have all been adapted for the screen. “The Counselor” is the first original screenplay by the author and the result is something less than whelming. One of the problems with the script is the titular character, known to us only as the Counselor. There is virtually no depth to Fassbender’s performance, a problem that seems to put the blame on the screenplay. I blame the script because I do not think that Fassbender is capable of intentionally being a 2D figure. While Fassbender is ostensibly the star of “The Counselor,” it is the supporting performances by Brad Pitt, Cameron Diaz and Javier Bardem that are the best things about the film. Diaz is a ruthless, controlling mastermind, Malkina, to whom everyone is a puppet to be played. Bardem is a riot as the always drinking and very wealthy Reiner, who is Malkina’s boyfriend, and Pitt puts a good spin as the counselor’s cautionary middleman in the drug buy, Westray. What confuses me is that these characters are so beautifully drawn and acted, why are the Counselor and his fiancée, Laura (Penelope Cruz), so shallowly realized? Cruz, in particular, is totally wasted in her stick figure role as the Counselor’s beautiful, kind and gentle girlfriend/wife. The film’s stars are supported by a bevy of characters and there are a couple of effective cameo performances to be had. Bruno Ganz and Ruben Blades have small but effective roles, particularly Blades as the drug lord. The rest of the cast, which includes Rosie Perez and John Leguzamo, are left out in the cold, character development-wise. The production, as expected with the pedigrees of the director, writer and stars, is sumptuously done with great sets that exude money spent. Costuming is notable, especially Cameron Diaz’s dazzling outfits that really bond with her sexy, ruthless Malkina. Brad Pitt, too, is adorned with luxurious western wear from his Stetson to his snake skinned boots and silver collar tips. Unfortunately, good production values, a stellar cast and director are not enough to overcome the screenplay that has characters come and go without explanation in scenes that go nowhere. As I said, disappointing.