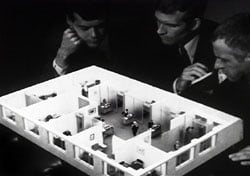 Mark Achbar, author of "The Corporation: The Pathological Pursuit of Profit and Power" and co-director of the documentary "Manufacturing Consent: Noam Chomsky and the Media") leaps from the written page to the big screen along with his co-director Jennifer Abbott ("A Cow at My Table") and writer Joel Bakan and a novel idea - if the 14th amendment had the unfortunate effect of giving corporations protection as a legal person, why not look at the human behavior of "The Corporation."

This epic (145 minute running time) documentary takes well known facts (big business is bad for the environment, abuses labor forces, etc.) and represents them in a novel and thoroughly entertaining way. The film loses its momentum and focus for a while, but eventually rebounds in the final stretch. "The Corporation" suffers only from an overabundance of ideas. The film begins with various CEOs describing what a corporation is. It is no surprise that they use positive analogies like sports teams, family units and the American Bald Eagle. Activist and author Howard Zinn (see "Howard Zinn: You Can't Be Neutral on a Moving Train") begins to turn the tide by noting that the amendment that was written to protect slaves was ironically also used to protect the corporation. It is unspoken that what lies ahead will show how we have globally become almost enslaved by corporations. Documentarian and star of the hour Michael Moore, who weighed in on this subject in "The Big One," pops in to note that people are not legally obliged to turn a profit. We're given the mind blowing case of how Kathie Lee Gifford's wares are sold with tags noting that a percentage of the profits will go to children's charities, but that those same wares are produced by thirteen year olds at poverty wages. The meatiest part of the film is structured around a psychoanalytical checklist of psychopathic symptoms. 'Harm to humans, harm to human health, harm to animals, harm to the biosphere' are all shored up with ample evidence of corporate abuse before being red checked with damning notations like criminal behavior without guilt. Monsanto Corporation comes off as one of the more villainous companies out there. If there's a hero to this piece, besides liberal interview subjects like Zinn, Norm Chomsky and Tom Hayden, it is Ray Anderson, the CEO of Interface, the world’s largest commercial carpet manufacturer. After years of ignorance, Anderson was shocked to discover the environmental damage his company was responsible for. Anderson goes so far as to describe himself as a plunderer, but is now a champion of sustainable manufacture. "The Corporation" builds a convincing case of pervasive, global, corporate domination. The filmmakers' arguments weaken with a section tying corporations to Fascism, particularly Nazi Germany, but they rebound by balancing all their bad news with examples of individuals fighting back - and winning. Former Fox news reporters Jane Akre and Steve Wilson were not so lucky when they refused to back down on a story alerting the public to corporate sponsor Monsanto's Posilac, a milk producing enhancer with dire effects on cows and their milk, but their story is certainly out now. Dr. Vandana Shiva, who bears the delightful description of seed activist, has a happier story to tell and notes that 'in every period of history... eventually when you call a bluff, the tables turn.' Michael Moore, who makes a far better interview subject than interviewer, delivers one of the last sentiments, that a corporation would sell the rope to hang itself if it thought it could make a buck. That's almost hopeful in a backhanded kind of way.