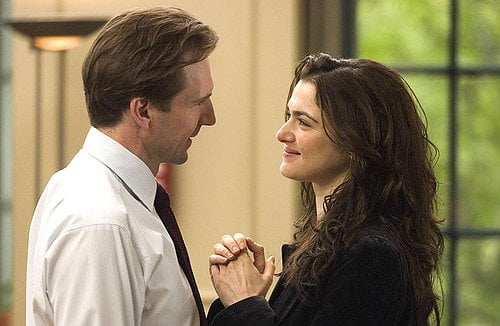 Justin Quayle (Ralph Fiennes, "Maid in Manhattan") is an innocuous British diplomat in Northern Kenya whose best friend and coworker Sandy (Danny Huston, "Birth," "The Aviator") has just jolted him with the worst kind of news - Justin's wife Tessa (Rachel Weisz, "Constantine") has been found dead in an overturned Jeep and may have been killed by the man she was traveling with, Dr. Arnold Bluhm (Hubert Koundé, "La Haine," "How I Killed My Father"), in a crime of passion. Mild-mannered Justin is shattered, but determined to get to the bottom of the death of his beautiful activist wife in the John Le Carré story "The Constant Gardener."

"City of God" director Fernando Meirelles invests Le Carré's political thriller with a moving story of love lost, then most profoundly found. Ralph Fiennes, missing from the screen since 2002's odd casting in "Maid in Manhattan," perfectly conveys the mild-mannered paper-pusher in thrall, then seriously thrown into doubt, over his exotic and assertive wife, but it is Rachel Weitz who really stuns, proving herself an actress far more capable than previous roles have allowed. Cinematographer César Charlone's ("City of God") urgent, gorgeous lensing, is but one superior technical aspect of this artfully crafted film. Jeffrey Caine's ("Rory O'Shea Was Here") screenplay adaptation keeps the two halves of the story, one the Quayle's relationship, the other the coverup of heinous crimes against the African people by the pharmaceutical industry, inextricably linked. As Justin sets about to travel with Sandy to identify his wife's body, he begins to rethink the events that have brought him to this place, beginning with his combustive first meeting with Tessa in London. Sent to deliver a speech in his superior's place, Justin is harangued by a young woman in the audience about England's presence in Iraq, who carries on even when unsupported by the disassembling crowd. Tessa apologizes, embarrassed by her rudeness, but Justin finds himself drawn to her passion. Soon the duo have tumbled into his bed and Tessa is asking to be taken along on his next assignment to Nairobi, whether as friend, employee or wife. 'I feel safe with you,' she explains and hushes his concerns about the brevity of their courtship with 'You could learn me,' the former statement better understood and the latter truer than ever after her murder. In Kenya, the heavily pregnant Mrs. Quayle seems to keep more company with her black mobile clinic colleague Bluhm and her late night research and report filing at the computer are kept secret, causing Justin twinges of doubt. The relationship between the two is playful, though, Justin's naivete perhaps a balm for Tessa's work. Things get bleak, however, when their child is lost and Tessa becomes more vocal about her attachment to natives like Kioko (Donald Opiyo), a young boy whose sister, Wanza Kilulu (Jacqueline Maribe), has just died while being attended by a white physician in a black ghetto hospital. Quayle's colleagues look askance at his wife's outspokenness. Justin overhears her saying hurtful things and reads suggestive correspondence intended for her eyes. But after her death, this woman blossoms anew when the calm and nurturing gardener begins to poke around, finding lies and corruption which begin with the coworker at his side and travel up to his government's highest levels. As Meirelles propels his antagonist forwards, he continually steps back to project Quayle's present through different prisms of the past. Tiny details, such as the Three Bees logo on a can of insecticide, not only take on additional weight later, but skew the meaning of past dialogue. An unthinking lack of generosity is recalled with overwhelming horror when redemption is denied under similar, but deadlier, circumstances. A remote area of quiet beauty, blackened with a cowardly crime, becomes a spiritual meeting place with yet another one. Loyalties shift and shimmer, as characters seemingly firmly entrenched in corporate collusion offer perspective and even help to Quayle's Everyman while those he had an allegiance to turn shadowy and threatening. The director and his production designer Mark Tildesley ("Millions") represent all these contrasts and variations visually, with cooly colored European locations giving dark comparison to the vibrant yellows and reds of Kenya. Camerawork complemented by Claire Simpson's ("Possession") editing render reminisces as glinting montage. Original music by Alberto Iglesias ("Bad Education") adds additional urgency to Quayle's quest. The beautifully, contrastingly paired lead performances are supported by a fine cast including the ubiquitous Bill Nighy ("Shaun of the Dead," "The Hitchhiker's Guide to the Galaxy") as Justin's oily Home Office Head, Gerard McSorley ("Veronica Guerin," "Rory O'Shea Was Here") as Sir Kenneth Curtiss, a pharmaceutical company president and Pete Postlethwaite ("Dark Water") as a type of human ground zero. Notable also are Archie Panjabi ("This Little Life," "Code 46") as straight-talking friend Ghita and Richard McCabe ("Vanity Fair") as Tessa's brother and helpful lawyer back in London, whose whistle blows loudly at film's end. "The Constant Gardener" is an astute mix of social awareness and an ephemeral love turned everlasting. It's a beautiful film, elegantly constructed, with a haunting love story that resonates across its exotic landscape.

Radical political activist Tessa Quayle (Rachel Weisz) is found brutally murdered in a remote corner of Northern Kenya. It is assumed to be a crime of passion and the members of the British High Commission expect her unambitious, mild mannered diplomat husband, Justin (Ralph Feinnes), to leave any investigation to them. To their surprise and chagrin the widowed man decides to delve into her death and uncovers an international conspiracy at the highest levels in “The Constant Gardener.” John le Carre’s best-selling novel is translated to the screen by the Academy Award nominated director Fernando Meirelles (“City of God”) and tells the story of Justin and Tessa Quayle, two people who are completely different in mind and spirit. Tessa seduces the rather shy diplomat and convinces him to take her, as his wife, with him on his assignment to Kenya. Once there, she becomes involved in humanitarian programs to help that country’s impoverished people and, in the process, uncovers a plot involving multinational pharmaceutical companies and the highest levels of the British government that affects the lives of millions. Things start off, literally, with a bang as a jeep goes tumbling across the bleak landscape. The two bodies in it are nearly burned beyond recognition but evidence points to one of the victims as Tessa Quayle. Her husband, Justin, must identify the badly battered body and he realizes that his wife is dead. Rumors of her infidelity with her colleague, a local doctor, plague the man and Justin decides that he must learn the truth. This begins a complex tale that spans three countries and two continents as Justin digs into Tessa’s past. Rather than being cuckolded, he learns that his wife was on a secret mission that would unmask an international conspiracy using the poor of such countries as Kenya to unknowingly act as laboratory guinea pigs used to test some very questionable new drugs. Justin, in his investigations into his wife’s life, also discovers that his superiors are part and parcel with the drug companies. The Constant Gardener,” the title of which refers to Justin’s passion to grow things, is a metaphor for shutting one’s eyes to the world around in favor of some trivial personal pleasantry. Justin and Tessa are complete opposites as he putters about with his titular hobby while she delves into a world where human life is little more than an experimental commodity used to further the profits of those in power. What Justin lacks in passion, Tessa more than makes up for. Rachel Weisz is best known for her star turns in the F/X extravaganza “Mummy” movies of recent years and has not, to me, proved herself to be a dramatic actress. But, under the firm hand of Fernando Meirelles, she is given a character in Tessa Quayle that the actress can sink her teeth into. She gives what is easily her best performance to date as a woman who will risk everything, including her marriage and her life, for what she feels passionately about. Tessa is a headstrong, fervent young woman who lives a secret life from her husband, which leads him to conclusions about her that could not be more wrong. Her passion, he learns, has cost her life. Ralph Feinnes has the tougher role of the film’s two stars with his milquetoast demeanor and lack of passion that is the antithesis of his wife. Where Tessa is like a bright, hot shooting star that is quickly burned out, Justin begins slowly and picks up speed as truths are unveiled and his beliefs are shattered. Feinnes’s subdued and subtle performance is the opposite of Weisz’s firebrand of a character and the two compliment each other when on screen together. In a nice bit of story crafting, Justin falls in love with a Tessa he never knew in life. The story (screenplay by Jeffrey Caine) goes beyond the typical fare you’d expect by spy meister Le Carre as he delves into a world of corporate conspirators that see the planet’s poor people as nothing more than lab rats and the means to make fortunes for its masters. The conspiracy is one that is chilling in its implications and thought provoking in the depths that man will sink for profits, despite its effect on the masses. The Constant Gardener” moves beyond the realm of most government and big business conspiracy sagas as it deals with global issues, such as AIDS but also with such deadly concepts as worldwide tuberculosis pandemic. As such, the film deals on many levels with the heart and mind of Tessa at its core and the awakening of Justin to things beyond his solitary gardening. Fine performances by these two, and the solid supporting cast led by Danny Huston and Bill Nighy (in a very different role for this usually comedic actor), make this a nicely cast film. Helmer Meirelles and his behind the camera crew beautifully compliment the richly talented cast. Cinematography, by Cesar Charlone, is stunning with its lush look at the Kenyan landscape and the ravaging depiction of that nation’s shantytown poor. “The Constant Gardener” is a finely crafted, mentally challenging work that is a big cut above the usual thriller or conspiracy theory.