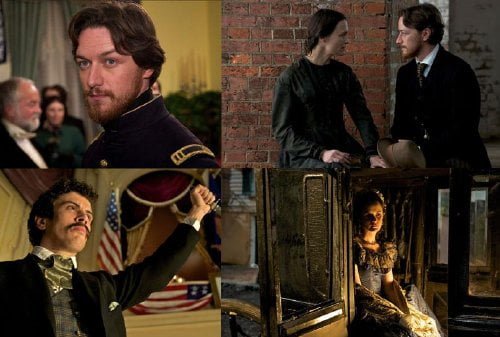 It is April 1865 and President Abraham Lincoln lay dead at the hands of actor John Wilkes Booth. A massive manhunt is set in motion to find Booth and the other plotters in the assassination. One of those arrested is Mary Surratt (Robin Wright), the owner of the boarding house where the murder plot was hatched. She is arrested along with others and is the lone female implicated in the death of the president. Her sole hope is her defense attorney, ex-Union officer Fredrick Aiken (James McAvoy), and he must use every legal skill he has to save “The Conspirator.”

Civil War hero Frederick Aiken (James McAvoy, "Atonement," "Wanted"), who witnessed the aftermath of Abraham Lincoln's shooting, is shocked when Reverdy Johnson (Tom Wilkinson, "The Ghost Writer," "The Green Hornet") asks him to defend Mary Surratt (Robin Wright Penn), who often hosted John Wilkes Booth (Toby Kebbell, "Control," "Prince of Persia: The Sands of Time") and other accused assassins in her boarding room home. Aiken has no doubts that the southern women is guilty of conspiring to assassinate the president, but once he's in the courtroom he is dismayed by the disregard for true justice against "The Conspirator." Robert Redford has made some fine films over the years ("Ordinary People," "Quiz Show"), but his last, "Lions for Lambs," was a failed cinematic vehicle for Redford's liberal political message. "The Conspirator" marks Strike Two. Even the underwhelming "Legend of Bagger Vance" had beautiful production values. This latest looks like a History Channel reenactment, often underlit, the multi-pronged assassination sequence lacking any excitement or suspense. Scottish actor James McAvoy occasionally manages to fire up the courtroom piece of the drama and Robin Wright looks and sounds the part, but, in truth, the best thing about "The Conspirator" is that it brings a little known piece of history to light and astonishes with the irony of its end credit captions. This one is for history buffs only.

Robert Redford mans the helm once again in this historically accurate but stodgy story about the aftermath following the first assassination of an American president. The conspiracy and Lincoln’s death set the stage for the courtroom drama where Mary’s fate is held in the balance. The acting in “The Conspirator” is solid but most of the characters are not given dimension, except for McAvoy as Surratt’s lawyer. Even Robin Wright is only given the air of stoicism and suffering to form her character, Mary. The original story, by James Solomon and Gregory Bernstein, is rich in historical detail but lacks depth of characters. Techs are fair but often too obvious. Cinematographer Newton Thomas Sigel uses sunlight streaming into the smoky courtroom in an attempt to create atmosphere. It only made me wonder why the actors were not always coughing with all that smoke whirling around. Production and costume design are accurate for the period.