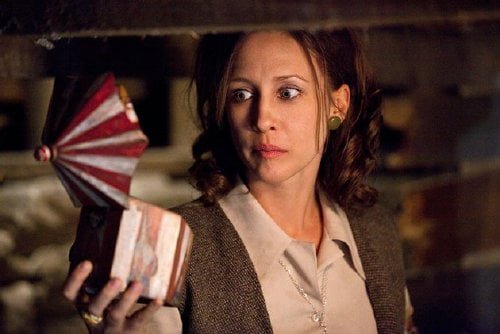 Carolyn Perron (Lili Taylor, "The Notorious Bettie Page," "Being Flynn") was thrilled when she and her long haul trucker husband Roger (Ron Livingston, "Office Space") were able to buy an antique farm in Rhode Island to raise their five girls. But trouble began the very night they moved in and escalated quickly enough for her to track down famous demonologists Ed (Patrick Wilson, "Insidious") and Lorraine Warren (Vera Farmiga, "Up in the Air," TV's 'Bates Motel') to help her rid her house of "The Conjuring."

Director James Wan ("Saw," "Insidious") continues to move away from the 'splat pack' with his latest horror outing that relies more on good old-fashioned style scares than gore, but do not mistake that this 'based on a true story' screenplay by Chad Hayes & Carey Hayes ("The Reaping," "Whiteout") is any closer to reality than the film made of the Warrens' most famous case in Amityville. Firstly, you'd have to believe that real witches, the bad spell Satan-worshipping kind, were burned in Salem. The fact that the real Perron family stayed in their home for ten years, rather than the relatively quick escape shown here also casts a lot of doubt on events as shown. So, is the movie any good taken as a work of fiction? Why indeed it is, largely due to the film's female cast and Wan and director of photography John R. Leonetti's ("Insidious") way of moving the camera for maximum disorienting spookiness. The Warrens arrive at the Perrons after middle child Christine (Joey King, "White House Down") has begun sleepwalking again and complaining of something yanking on her leg at night. They've all smelled foul odors, seen doors and cabinets rattling and heard eerie sounds, like the piano in the boarded-up basement being played. On their first night, their dog Sadie refused to come into the house and is found dead the next morning by the youngest, April (Kyla Deaver), who's also got an imaginary friend she can see in the spiraling mirror of a music box. Birds fly into the house and break their necks, the clocks always stop at 3:07 a.m. and Caroline dismisses the bruises which have begun to pop up all over her body as an iron deficiency. Turns out there are two women in jeopardy here. Ed didn't want to go to the Perrons, upset by the toll their last case, which involved an exorcism, took on his wife. But Lorraine is the mother of a young daughter too, and she wants to help Carolyn, especially when she senses the dark presence which has latched onto her. Infestation and oppression, the first two stages of demons afoot have already taken place. Next up - possession! The film doesn't offer anything new (and, in fact, has the odor of a Warren case files franchise in the making), but what it does, it does pretty well. The Warrens' in house museum of haunted artifacts figures prominently and well in a prologue case featuring creepy doll Annabel that plays like a standalone Twilight Zone short. Farmiga is terrific portraying the clairvoyant Warren as a woman who truly believes and is brave enough to face what she sees and Taylor's no slouch as the embattled mom who's seeing her dream turn into a nightmare. The house can appear as both although it's clearly Southern in setting despite its supposed Rhode Island locale (exteriors were shot in North Carolina). The film's best aspect is its camerawork, which glides along behind its subjects, turns on its head and rotates in a shot that encompasses two floors. Also outstanding is Kristin M. Burke's ("Insidious") costume design which dresses Lorraine up in 70's maxi skirts and flat patent pumps while Carolyn's frumped down in a washed out quilted floral robe. The girls sport the high-waisted jeans of the era. Another interesting aspect is the early ghost-sleuthing equipment employed by the Warrens and their amiable young assistant Drew (Shannon Kook), such things as heat sensitive cameras and UV lights. But the script goes overboard with its 'possess-the-mother-to-get-to-the-child' theme, particularly when the haunting spreads back to the Warrens' Connecticut home an their own daughter Judy (Sterling Jerins, "World War Z"). "The Conjuring" isn't the anti-Christ, it's the anti-"Mama!" As Ed Warren, Wilson gives off a squeaky clean Pat Boone vibe and as pere Perron Livingston seems merely clueless. "The Conjuring" is a well made horror film that can't be taken seriously. Oddly, while it's a much better effort than the director's last, "Insidious" was more genuinely eerie.