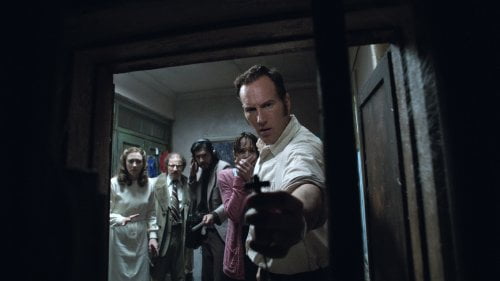 In 1977, with their experience at a certain house in Amityville still haunting them, demonologists Ed (Patrick Wilson) and Lorraine Warren (Vera Farmiga) travel to London at the behest of the Catholic Church to investigate the strange events surrounding 11 year-old Janet Hodgson (Madison Wolfe, "Joy," "Keanu"), the second eldest of four living with her single, overwhelmed mom Peggy (Frances O'Connor, "A.I. Artificial Intelligence"). Even then, debate raged over the so-called Enfield Poltergeist, but what the Warrens witness leaves them with no doubt in "The Conjuring 2."

What a load of rubbish. After fine work serving up old-fashioned scares in "The Conjuring," cowriter (with his "Conjuring" writers Carey & Chad Hayes and "Orphan's" David Johnson)/director James Wan ("Saw," "Furious 7") returns to the franchise with something akin to its unofficial prequel "Annabelle." While the basic outline of the real, still debated case can be found, the story's been tarted up to ridiculous degrees, any restraint found in the first film abandoned. Without once ever using the term 'poltergeist,' the film begins by establishing the stress the Hodgson family is under, notably mother Peggy who's struggling financially, and Janet, upset that her mom won't believe she wasn't really smoking at school. Their council flat in Enfield is an obvious condemnation candidate (here, anyway), its walls peeling and cracked, its basement a tributary of the Thames. Cinematographer Don Burgess ("Flight") creates obvious pockets of impenetrable shadow in every room of the house, including the upstairs landing where the youngest Hodgson, Billy (Benjamin Haigh), has a teepee toy tent. (Speaking of toys, Wan repeats himself, using a 'Crooked Man' zoetrope whose animated man springs to life like a character out of "Beetlejuice.") After stowing her homemade spirit board under her bed in the room she shares with elder sister Margaret (Lauren Esposito), Janet begins finding herself by the living room's old, cracked leather chair in the middle of the night. Then she begins to hear and project the voice of an old man who keeps claiming ownership of the home. When furniture begins to move of its own accord, the family flees to neighbors Peggy (Maria Doyle Kennedy, "Sing Street") and Vic Nottingham (Simon Delaney, "Alan Partridge"). The police are called and witness the same, but state that the Hodgsons' problem is out of their jurisdiction. Meanwhile, back in Connecticut, Lorraine is panicking, the demon she'd seen in Amityville not only haunting her at home, but offering visions of Ed's death. (Daughter Judy (Sterling Jerins, "The Conjuring") is also imperiled, only to be completely forgotten.) When they're called upon to observe the Hodgsons before the Church will take action, she's reluctant, but Ed is undeterred - a family needs help! The Enfield case was investigated by not only the Warrens, but by the Society for Psychical Research's Maurice Grosse (Simon McBurney, "Magic in the Moonlight"), a believer, and professor of psychology Anita Gregory (Franka Potente, "Run Lola Run"), a sceptic. Both fulfill their duties here, but with Wan's rendition of the Warrens on site, the situation spirals more into Tobe Hooper's "Poltergeist" than the Enfield story's, with an over-the-top climax part "The Exorcist" part "The Perils of Pauline." Lorraine, it should be noted, continually tells Ed she feels no presence in the Hodgson home, confirming Gregory's findings, then does an abrupt about face just in time for Wan's overkill. Farmiga and Wilson are both fine, instilling their characters with Christian values and courage, Wilson even acing a credible Elvis cover. Young Wolfe is quite good vacillating between scared young girl and creepy conduit. But Wan disappoints, leaning more heavily on jump scares and silly effects, Burgess's work more mundane that John R. Leonetti's creeping, spiralling camerawork of the original. Returning costumer Kristin M. Burke gets the 70's right, with Lorraine's knitted vests and Anita's hippie chic. A coda shows Ed encasing that zoetrope in their home's museum, right next to the almost identical toy from "The Conjuring," Annabelle prominent over his shoulder. Those cases are jammed packed. If Wan goes back to the well, let's hope he gets his mojo back. Grade: