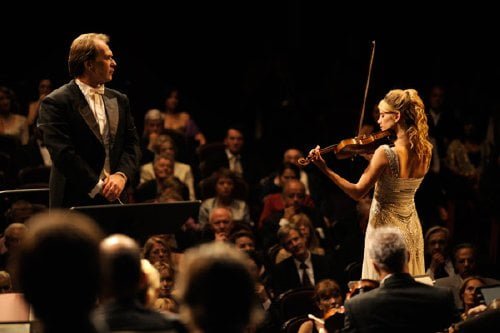 30 years ago, maestro Andrei Filipov (Aleksei Guskov) was fired from the prestigious Bolshoi Symphony for trying to protect his Jewish musicians and declared “an enemy of the people.” Now the disgraced janitor for that same orchestra, he discovers a fax inviting the Bolshoi to give a one time performance in Paris. Andrei steals the invitation and sets off to assemble the old orchestra and go to France to give “The Concert.”

Thirty years ago, Andreï Filipov (Aleksei Guskov) was the maestro, the highly regarded conductor of the Bolshoi orchestra. But Filipov dared to brave the wrath of Brezhnev by keeping Jewish musicians working. Then he went further, featuring Leah, a Jewish violin soloist, for a performance of Tchaikovsky’s Concerto for Violin and Piano. He was shut down mid concert, his baton snapped in two. He's been humiliated daily ever since, having been kept on at the Bolshoi as its janitor. But while cleaning the director's office, Filipov intercepts a fax inviting the Bolshoi to stand in for the London Philharmonic at the Theatre Du Chatelet in Paris two weeks hence. Much to his good friend Sacha Grossman's (the Zero Mostelesque Dmitri Nazarov) consternation, he hires the very man who broke his baton all those years ago, former KGB officer Ivan Gavrilov (Valeriy Barinov), to pull off some amazing sleight of hand getting a Bolshoi of Filipov's own making to perform "The Concert." Writer/director Radu Mihaileanu ("Train of Life") continues his cinematic exploration of Jewish history with "The Concert," an expert blend of political satire, fish-out-of-water farce and melancholy musical legacy drama. Guskov is terrific as the humbled maestro who dares to dream about the ultimate harmony amidst comical chaos. Mihaileanu introduces us to Filipov rapturously conducting an orchestra - it's not until his cell phone goes off that we realize he is a janitor observing from a balcony. Once Gavrilov agrees to help him with his Bolshoi deception (they and Sascha intercept a phone call from a Bolshoi broom closet that epitomizes the inconveniences of present day Russian life), the comedy begins. First, Andreï's wife Irina (Anna Kamenkova Pavlova), who 'buys' attendees for Russian weddings so oligarchs and gangsters can outdo one another, encourages her husband in his deception, telling she'll divorce him if he *doesn't* do it. Then he and Sascha begin contacting those 'Zionist enemies of the People' of the Bolshoi of the past. Many of them are pretty old and decrepit, like asthmatic trumpet player Victor Vikitch (Aleksandr Komissarov), and, as Andreï needs fifty-five musicians, he also engages gypsy violinist Vasily whose band can also make clothes and doctor passports. Meanwhile Gavrilov indulges nostalgia brokering the deal, with demands for a dinner at Le Trou Normand, a Seine river cruise and lodging at a three star hotel. For Filipov he requests double his orchestra's rate and the famous French violinist Anne-Marie Jacquet (Mélanie Laurent, "Inglourious Basterds"), who has never played Tchaikovsky, to perform as its soloist. In Paris, Olivier Morne Duplessis (François Berléand, the "Transporter" series, "A Girl Cut in Two"), in his chic modern office, the antithesis of everything we've seen in Moscow, puzzles over the 'demand' for pre-Perestroika wages and a restaurant that no longer exists, but comes up with his own deceptions to get the contract signed. But he cannot prepay the 'Bolshoi's' plane fares, so Gavrilov hustles for a sponsor. They find one, the guest of honor at one of Irina's crass weddings in a auditorium with drunken bride. Tretiakin, the 'Tsar of Gas' also plays cello, badly. A whole other transaction is occurring between Jacquet, who's intrigued by the Bolshoi offer, and her manager/assistant Guylène (Miou Miou, "Entre Nous," "Family Hero"), who clearly knows more than she's letting on about her rejection of the idea. Then the Russians hit Paris and it seems like an impossibility for Filipov to achieve his dream. The film is terrifically funny. Filipov's orchestra turn into a drunken mob in Paris, immediately abandoning any agenda. Filipov has the most bizarre non-practicing practice session ever. (American audiences should note that Andreï's inappropriate welcome to his violinist is a joke lost in translation having to do with an old-fashioned style of French used by Russians.) Tretiakin muscles into Duplessis's territory by threatening to cut off the gas to Europe if he doesn't get Russian broadcast rights to the event. When Viktor's plan to sell black market Russian caviar to French chefs falls flat, his son's got him covered with the Chinese cell phones he's given to every musician to smuggle through. Oddly enough, these will be the instruments which help save the concert. Mihaileanu also weaves a strand of loss and melancholy throughout these shenanigans. As Filipov keeps trying to hang onto his soloist, tales of the past are told. Unfortunately he also sinks back into the vodka bottle which he had escaped (their dinner conversation is held in a restaurant whose interior beautifully evokes both present day Paris and Russia's past). Then the real director of the Bolshoi, who happens to be vacationing in Paris, sees a poster advertising Andreï's event. Rest assured, however that a film called "The Concert" ends on a glorious note. The film's visuals are a great juxtaposition between the golden baroqueness of Moscow and Paris's sleeker city of light. Black and white and a kind of visual and aural warping are used for flash backs. The film's finale, Tchaikovsky’s Concerto for Violin and Orchestra, has been artfully condensed from 22 minutes to 12 and it is thrilling. "The Concert" is about more than music, it's about a leap of faith. Radu Mihaileanu has walked a tightrope of tones and his film is funny and breathtaking.

OK, here is my problem with “The Company You Keep.” 76-year old helmer Robert Redford should not cast himself in a role that he is, quite literally, decades too old to play fugitive Nick Sloan, a former member of the Weather Underground who allegedly participated in the bank robbery that ended with a guard lying dead on the floor. Our suspension of disbelief is further tested when we learn that Jim Grant (Nick’s alias that he has been living since the 1970s) is the father of 12-year old Isabel (Jackie Evanch). He could be her grandfather, maybe, but not her father. Redford is a good actor but not good enough to make his character believable, especially when it comes to action scenes. At one point, he looked wizened and old. The story, adapted from the Neil Gordon novel by Lem Dobbs, is a whirlwind of plotlines and characters. Though Redford is the “star” of the film, it is Shia LaBeouf, as the ambitious newshound, Ben, working for a backwater newspaper in Albany, who centers “The Company You Keep.” When the Solarz story breaks, he begs his editor, Ray Fuller (Stanley Tucci), to assign him to the potentially juicy story about the decades ago murderers being brought to justice. His first target is Jim Grant, a lawyer who turned down the job as Solarz’s defense attorney. But, when he approaches Grant, he is shut down. Undeterred, Ben starts looking into the lawyer’s background and finds that he only began to exist in the 70s. Meanwhile, the FBI, led by special agent Cornelius (Terrence Howard), tries to get Solarz to identify her accomplices but fails. Ben, on the other hand, begins to dig into Grant’s background and finds the skeletons he had been hiding. When Jim suddenly drops off the radar, leaving Isabel in the care of his younger brother Dan (Chris Cooper), Ben takes chase. What follows is a cross country racing-the-clock chase as Jim calls in old markers with friends, colleagues and acquaintance from back in the day. This results in a who’s who of Hollywood character actors filling many roles, with Julie Christie as Mimi Lurie being the one person who can clear Jim/Nick’s name. Along the way to finding Mimi, Jim seeks assistance from a list of characters too many to describe. But, such veteran thespians as Nick Nolte, Richard Jenkins, Stephen Root and Sam Elliott all lend Jim a hand while Cornelius and his team, including young special agent Diana (Anna Kendrick), begin the nationwide manhunt for Nick. Most of these characters are given cameo treatment but the high caliber of acting talent helps move things along. Redford does a competent job behind the camera but there is no feel that this is a “Robert Redford film” When Clint Eastwood makes a movie, you know it is a “Clint Eastwood film.” “The Company You Keep” feels generic from start to finish. The great cast of characters, though, raises this up a notch.