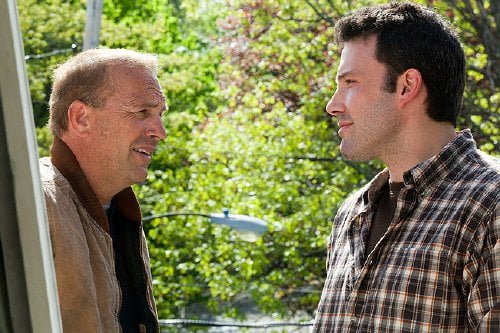 In 2008, the banking crisis that shook the US economy struck the very foundations of corporate America. Two years later, the conglomerate GTX Corporation begins downsizing with plant closings and massive layoffs. It is not just the workers affected, though, as middle and high-level executives also face the corporate chopping block in “The Company Men.”

The executives of GTX Corporation have been riding high for years, a small shipping company grown huge by founding CEO James Salinger (Craig T. Nelson, TV's 'Parenthood'). But one day, hot shot sales division Bobby Walker (Ben Affleck) drives his Porsche into work and is told he's being summoned to a conference room. The news is not good, and things continue to go downhill for those who thought of themselves as "The Company Men." This first feature from writer/director John Wells (TV's 'ER') is certainly timely, but it suffers from following well worn paths and wrapping things up a bit too neatly. Each of the main characters is a big symbol - the villain, the ethical moralist, the denier, the corporate ax, the victim - but the cast is first rate. Wells uses Boston and its suburbs and northern shores to reflect everything from blue collar shipyards to glass and steel office towers, magnificent old homes by the sea, McMansions and working class triple deckers. Walker's first move is to look for his boss, Gene McClary (Tommy Lee Jones), but he is informed the man is on a business trip. When his wife Maggie (Rosemarie DeWitt, "Rachel Getting Married") finds him home early, making supper on the grill, she reminds him of a family obligation. The news comes out and Maggie immediately begins thinking of ways to hunker down, including returning to nursing. Bobby will hear little of it. His brother-in-law Jack (Kevin Costner, understated and excellent) offers him work as a manual laborer restoring houses and Bobby rudely shuts him down. The hollow pep talks of the out placement service provided by GTX offend Bobby more, but he makes a friend in cubicle mate Danny (Eamonn Walker, "The Messenger"), an unemployed engineer who shares in gallows humor. Maggie returns to work, discovers their house is no longer worth what they owe on it, yet still Bobby refuses to cancel his golf club membership. Back at the office, Gene, a company cofounder, is enraged to discover huge cuts to his staff have happened in his absence and without his participation. He storms into Salinger's office and is shut down. Later his old friend visits, ostensibly to extend a New Year's offer to vacation at his Sun Valley lodge, but in reality to lay down a 'respect my authority' message. Gene walks into his magnificent home, decorated with multiple trees and pine boughs for the holidays, only to have his wife inform him that 'Stephanie *finally* found a table for the for the window.' The price tag? $6,300. Gene's old friend Phil Woodward (Chris Cooper, "The Town"), the company CFO considered a Salinger suck-up by younger execs, is the next to get the ax, and he's completely asea. He returns home to be told by his teenage daughter that this year's class trip is to Italy - she asks if that's OK clearly expecting to hear nothing but. Advised by out placement to dye his hair and revise his resume, Phil is horrified, but lunch with an old colleague (Phil pointedly orders Scotch and a steak while his buddy makes more modern choices) brings him crashing down to earth. It's fairly easy to see where everything is headed, except, perhaps, for the Gene's trajectory, which is a bit of a fairy tale from both extremes. The essential emotional thread which runs throughout, though, that what we do to make a living should not necessarily define us, that people are more important than possessions, and that the American Dream is all but dead. comes through loud and clear, most notably in the way Bobby's wife and brother-in-law react to his change in fortunes. Affleck's on a real upswing as both an actor and filmmaker and he's arguably better here than he was in his own film. Many might think it offensive to be expected to sympathize with a guy used to pulling down in $200K a year, but Affleck's frustration and eventual turnaround are affecting. DeWitt is just great as the woman whose husband's high salary hasn't sullied her roots. Costner's character is perhaps a bit of a saint, but he's not advertising it and his plain spoken treatment of Bobby seems effortless. His role may scream 'moral compass,' but Lee Jones works it and as the corporate ax and Gene's secret lover Maria Bello exudes a brisk efficiency that does not exclude empathy but acknowledges inevitability. Craig T. Nelson is a slippery bad guy, one who extends a branch while concealing a knife. Cooper, who astounded in only a single scene in "The Town" as Affleck's jailed dad, here is saddled with the most cliched role and doesn't find much to rise above it. "The Company Men" has inevitably been compared to "Up in the Air," but where that film was quirky and almost spiritual, this one is down to earth, meat and potatoes. Wells's film lacks subtlety, but it features a great ensemble cast and a wide variety of locations (art direction by "Walk the Line's" John R. Jensen, cinematography by the great Roger Deakins).

Long-time TV producer and first-time feature film director-writer John Wells takes on the daunting task of creating a complex, multi-layered ensemble piece that makes a case against the doings of corporate leader shaping America for their own greed. Ben Affleck, Chris Cooper and Tommy Lee Jones represent the middle to upper to upper-upper executives who fall to the greed of the company owners. The plan, for GTX proxy James Salinger) and his company henchmen, is to downsize the company, sell off assets and increase the value of their own stock. If wealth is good, more wealth is better. Bobby Walker (Ben Affleck), the mid-level exec, is unceremoniously cut from the company roster, with six months severance pay and, he finds out later, downgraded stock options. He does not seem too concerned, telling his wife Maggie (Rosemarie DeWitt) that it is “not a worry.” Then, he finds out just how tough it is to get a job in a hurting economy. He tries to keep up appearances, having his Porsche detailed and keeping up his ritzy golf club membership, instead of economizing and tightening the belt. The extravagances force him and Maggie to sell the house and the car and move in with her brother, Jack Dolan (Kevin Costner), the owner of a small construction company. Phil Woodward (Chris Cooper) is a production VP at GTX, the kind of position that seems protected and safe from layoff. It is not and Phil finds himself in a market where he is overpaid and over aged and the competition is 20 years younger. He worked his way up, over the years, from toiling on the factory floor to the upper levels of GTX. Since he is not a MBA or Harvard graduate he falls victim to the old boy network. His is the most tragic of the trio of stories. Gene McClary (Tommy Lee Jones) heads a division of GTX and he seems the most protected of all. But, he has scruples and is against Salinger’s corporate plan, sticking up for the workers who have lost their jobs. Unscrupulous greed, though, is far stronger and he, too, falls by the wayside. His strength of will makes him a non-quitter and he refuses to give up, making “The Company Men” a hopeful film in the end. John Wells gives a notable tyro debut with “The Company Men.” He shows a deft hand at marshalling his large cast and complex story. The lives of these three men and those around them – family, friend and foe – are intertwined and the story moves nicely from one man to the next. Affleck is good as the overly confident Bobby whose cockiness steadily drains as his new reality sets in. Chris Cooper, always the fine actor, garners strong sympathy as a man who loses hope just when he needs it most. Tommy Lee Jones does not stretch here but he can be depended on to give his character three-dimensions. The copious supporting cast has such veterans as Nelson, Costner, Maria Bellow and Rosemarie DeWitt and a bevy of little and unknown actors all lending their hand to flesh out the background. It is all a big job and Wells gives an admirable account for himself. Techs are pro, with uber-cinematographer Roger Deakins leading the behind the camera crew with his crisp and fluid lensing. Editing, by Robert Fraven, meets the complex tale head on and helps make the film flow smoothly. Production design (David J. Bomba) and art direction (John R. Jensen) run the gamut from the high levels of corporate opulence to the simple working class homes, complementing the intricate twists and turns of the story.