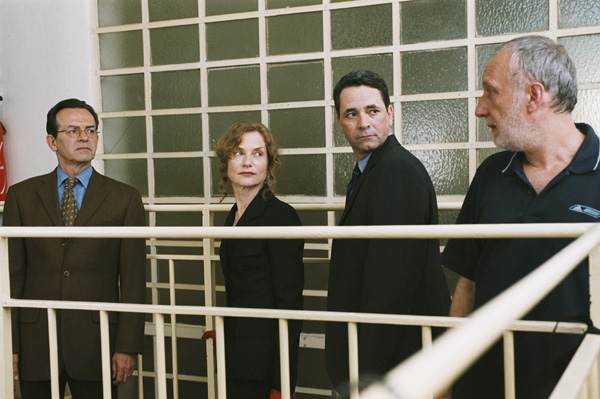 Michel Humeau (François Berléand, "Les Choristes," "Transporter 2"), the chief executive of a huge Parisian based industrial conglomerate, has three secretaries attending to his imminent vacation - one for his wife, one for his kids and one for his mistress - but he is arrested as he leaves the building. Humeau is the top tip of an iceberg of white collar crime and corruption and he will be faced with a judge, Jeanne Charmant-Killman (Isabelle Huppert, "Gabrielle"), nicknamed 'The Piranha' in a struggle which becomes "The Comedy of Power."

Seventy-six year old director Claude Chabrol has some fun tweaking both sides of the law in his sixty-seventh film and his seventh with actress Huppert and this is his best film since their last collaboration, "Merci Pour le Chocolat." Based on the "Affaire Elf," France's version of the Enron scandal, "The Comedy of Power" doesn't just indict the incredible arrogance of corporate executives and politicians used to having their wheels greased, but skewers the power lust of those entrusted by the people to ferret them out and bring them to justice. Diminutive Huppert, with her coolly disconcerting gaze, immediately begins playing manipulative cat and mouse games with her quarry. 'I pictured you taller,' says Humeau upon meeting her. 'Let's hope it's not a matter of inches,' she replies tartly. As he sits and scratches at a rash caused by an allergic reaction, she dons the bright red gloves she favors. She demands there is no smoking in her office, yet later puffs away in front of the accused she denied the privilege to in the same space. At home, her husband, Philippe (Robin Renucci, "The Dreamers"), a physician who treats needy AIDS patients, seems cowed into submission by his wife's entitlement to control. His gad about visiting nephew, Félix (the director's son, Thomas Chabrol, "The Flower of Evil," "The Bridesmaid") becomes her friendly confident in the complex case while he becomes alarmed for his wife's safety (her brakes are cut, then things escalate). As Jeanne faces the dual career events of a promotion and a forced, unwelcome partner (Marilyne Canto, "Après vous..." as Erika), her home life becomes more and more strained. She assumes a much grander office, yet leaves her marital home for a tiny studio apartment. The game bar is raised when her 'insider,' Jacques Sibaud (Patrick Bruel), the man in line to inherit Humeau's post, becomes yet another target of her investigation. Jeanne Charmant-Killman is a role tailored made for Huppert, whose dogged determination and staccato dialogue delivery drive the pace of the film. She gets at the comedy of the character by allowing her curt command to give way to the look of the cat who ate the canary. It's no surprise that she enjoys such an easy, somewhat flirtatious rapport with Chabrol the son, whose admiring Felix indulges her worst impulses and Renucci tempers the comedy with tragic notes. The corporate and political weasels, who also include Jean-François Balmer as Boldi and Philippe Duclos ("The Bridesmaid") as Holéo, create all levels of corporate malfeasance, from arrogant entitlement to squirmy guilt. The production is rather pedestrian at times, with Eduardo Serra's ("Girl With a Pearl Earring, "The Bridesmaid") camera merely recording the action in flat lighting. The intermittent score by Matthieu Chabrol ("The Flower of Evil," "The Bridesmaid") favors simplistic heraldic horns.