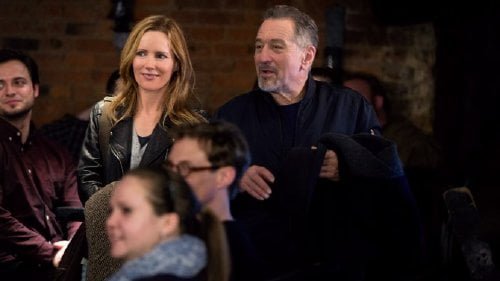 Jackie Burke (Robert De Niro) was a top insult comedian back in the day but was only remembered for a character he created years ago on a TV sitcom, “Eddie’s Home.” Trying to revive his standup career, he screws up when he accosts a member of the audience and must perform community service in “The Comedian.”

"The Comedian" was largely dismissed when it surfaced as an awards contender, something which it distinctly is not. It's also folly to think of it as a comedy on the basis of its protagonist Jackie Burke's (Robert De Niro) standup routines, which will only appeal to those who like the most puerile, scatological humor. But this is who Jackie Burke, beloved as Eddie, his character from the fictional old sitcom 'Eddie's Home,' is. Think of "The Comedian" as a character study of a C level celebrity struggling for relevance and it's an entirely different thing. After spending thirty days in jail for punching a heckler, Jackie's back in the limelight, a video of the event gone viral. But his agent (Edie Falco) is struggling to find him gigs and his sister-in-law Flo (Patti Lupone) isn't happy to see him, Jackie only appearing in her and his brother Jimmy's (Danny DeVito) deli when he needs help. When Jackie learns his niece, Brittany (Lucy DeVito), is getting married, he agrees to attend mostly to spite Flo. Jackie's not done paying his debt to society, tasked with completing 100 hours of community service. He meets Harmony Schiltz (Leslie Mann) at a soup kitchen and recognizes a kindred spirit (Harmony's been sentenced for a violent reaction to having caught her boyfriend in bed with another woman). Hoping to cheer her up, Jackie takes Harmony to the Comedy Cellar where he's greeted like a conquering hero. Emboldened, he asks her to be his wedding date. She agrees, but with a caveat. Jackie is to be her birthday gift to dad Mac (Harvey Keitel), a big 'Eddie's Home' fan. This moderately entertaining film (written by TV gag writers Jeff Ross and Lewis Friedman along with "What Just Happened's" Art Linson and "Unbroken's" Richard LaGravenese) illustrates the real life ramifications of Burke's abrasive comedy stylings, where silver linings for the past-his-prime celeb blossom on the Internet. There are a number of strong scenes. Mac's introduction during an intimate birthday dinner defines a toxic father-daughter relationship in short order. After his agent finally wrings enough humility out of her client to get him readmitted into the Friars Club to take part in a roast, his moment in the limelight proves so lethal the broadcast is canceled. But the story hangs on Jackie's relationship with Harmony and De Niro and Mann prove a surprisingly punchy pair. De Niro has made any number of poor late career choices ("Bad Grandpa" anyone?), but "The Comedian" gives him a character to chew on. Even better is Mann, whose long, anger-filled ramblings and self defensive feints have great comedic rhythm. As one would expect, "The Comedian" features a cornucopia of comedic cameos (watch for Charles Grodin, Cloris Leachman, Billy Crystal, Jessica Kirson, Jim Norton, Jimmie Walker, Brett Butler, Richard Belzer, Gilbert Gottfried, Hannibal Buress and more). Director Taylor Hackford ("Dolores Claiborne," "Ray") contrasts the old (delis, comedy clubs, steak houses) and new (lavish wedding halls, upstart television offices) of New York as well as the dark claustrophobia of the Big Apple with the wide open brightness of Florida. The film's 120 minutes zip along and if the film's final punchline is a bit of a cliche, its characters don't take the expected path. Grade:

Taylor Hackford is an eclectic director, to say the least. His first big hit, “An Officer and a Gentleman (1982),” was a crowd pleaser, especially with the femme audience, particularly the tear-educing, romantic finale. He has created dramas with “Dolores Claiborne (1995)” and “Proof of Life (2000);” biographic films with “Ray (2004)” and “Love Ranch (2010);” very dark satire with “Devil’s Advocate (1997)” and action flick with “Parker (2013.)” “The Comedian” may be construed as Hackford’s stab at comedy, though there is much of that, especially with the performances by real-life stand-up comics doing their thing at the “Comedy Cellar” in New York City. But, what we have here is a character study of an aging insult comic trying to make a living in a standup world different than it was when Jackie first entered the comedy biz. Jackie is anything but politically correct in a time where being PC is essential. Jackie’s story follows a pattern of fall and rise. When he is at the lowest point in his career. Jackie does something, like beating a heckler with a microphone on camera, which goes viral and renews the public’s interest. Unfortunately for the comic, that interest is in hearing his trademark line as Eddie, not in his new material. The pattern of fall and rise is repeated twice more as “The Comedian” rolls along. Robert De Niro’s Jackie is joined by a suitably quirky array of actors who help the story progress in several ways. There is Jackie’s relationship (or lack thereof) with his brother, Jimmy (Danny DeVito), and his wife, Flo (Patti LuPone). The only time he sees his family is when he needs something, usually money, and the reason for his latest visit. Jimmy gives Jackie the $5000 he asks for, with a proviso: he attends his niece, Brittany’s (Lucy DeVito), wedding to her same sex partner, Frankie (Kelly McCrann). This does not make for a friendly family gathering when Jackie, at Btrittany’s insistence, toasts the happy couple. The main subplot involves a chance meeting at a soup kitchen on Thanksgiving day with Harmony Schultz (Leslie Mann), a volatile women who is also doing community service and also for assault and battery – she caught her husband in bed with another woman. Their mutual “criminal” record draws the two together in a platonic friendship, until…. De Niro and Mann have an interesting chemistry as the two, years apart in age, bond on screen - not as a couple but as kindred spirits. The edgy insult humor that is Jackie’s trade spawns a number of comical events besides the comic’s viral videos. Mann and Patti LuPone have a memorable cat fight at Brittany’s wedding, incited by Jackie’s speech, itself an inappropriate string of bawdy jokes, offending nearly everyone except his adoring niece.. The film jumps in location from Manhattan and the Comedy Cellar to the retirement centers in Florida and gives good shrift in production in both locales. I expected to see Robert De Niro do the same shtick that he does lately but, his character study is unique and shows he can still play a character and not just a caricature.