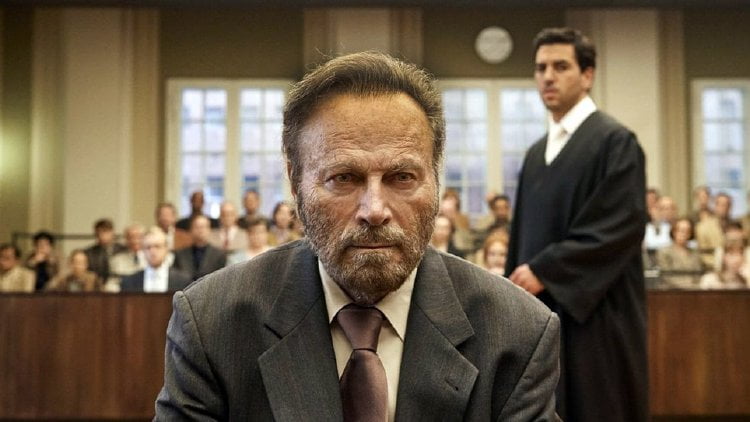 Three months after passing the bar, Caspar Leinen (Elyas M'Barek) accepts his first case, defending a 70 year-old Italian German who refuses to say why he shot honored industrial magnate Jean-Baptiste Meyer.  Then things get really complicated.  Caspar discovers that Jean-Baptiste is actually the man he knows as Hans (Manfred Zapatka), the benefactor responsible for his law career, the grandfather of both his childhood friend Philipp and Philipp’s sister, his former lover Johanna (Alexandra Maria Lara, "Rush").  He’ll also be going head to head with his legendary and hugely respected former criminal law professor Richard Mattinger (Heiner Lauterbach) as he argues “The Collini Case.”

Loosely based on a true story (adapted from the novel by Christian Zübert, Robert Gold and Jens-Frederik Otto written by Ferdinand von Schirach, who based his story on his own grandfather), director Marco Kreuzpaintner ("Trade") has constructed a film that works both as a gripping courtroom drama and a personal family tragedy.  Beautifully photographed by Jakub Bejnarowicz (Netflix's 'Perfume') in widescreen with a color palette of green, blue and blond, the film is gripping from start to its shattering finish.

The film opens with an odd bit of cross cutting featuring Caspar at a boxing workout and an old man in an overcoat tracking bloody footprints into a hotel lobby.  When a receptionist approaches to ask if the old man is OK, he responds in halting German – ‘He is dead…in the Presidential Suite.’  This is the last thing we’ll hear Italian Fabrizio Collini (Franco Nero) say for quite some time, much to his young lawyer’s frustration.  Yet despite his horror at having learned who the victim was and the pleas of Joanna for him to drop the case (he makes an attempt, but is easily dissuaded by Mattinger), we can see that, perhaps due to his own outsider status as half Turkish, Caspar has compassion for the man.

Kreuzpaintner economically signals character information.  In one brief scene where Caspar meets up with some law school friends at a cafe, they rib him for wearing his robes to an arraignment, then relate a story when Mattinger’s seen outside that explains the man’s legendary status.  During visits to the grandiose Meyer estate, memories bring flashbacks to Caspar’s childhood and the victim’s place in it while the present illustrates his ever changing status with Joanna.  At Meyer’s funeral, her eulogy seems directed at him.  Later Caspar will be appalled to find his estranged German father (Peter Prager) at the reception.  Even later, it will be a mention of his father than will cause Collini to utter his first words.  The breakdown during pouring rain of the vintage Mercedes gifted to him by Meyer will cause Caspar to seek refuge in a pizza parlor.  Asking for delivery to cadge a ride, he will meet the punk rock Nina (Pia Stutzenstein), who, together with his dad, will form his surprisingly uniquely qualified legal investigative team.

Just when all seems lost in court, a bit of testimony regarding the murder weapon gives Caspar a lead and there will be a couple of more twists revealing nothing is as it seems (some more easily guessed than others).  M'Barek shoulders the film with an arc that plays like an adult coming-of-age in which illusions are shattered to reveal a devastating truth.  Nero cuts a tragic figure, Lauterbach a slippery one.  Maria Lara and her director give her character more depth, more grayness, than is typical for her role.

That odd bit of cross cutting at the film’s beginning makes perfect sense by the film’s end.  Kreuzpaintner expertly weaves tales of history, romance, friendship, fathers and sons into a gripping courtroom drama.

A man walks into a hotel and asks to see Mr. Meyer (Manfred Zapatka). A short time later, the man, Fabrizio Collini (Franco Nero), walks across the lobby, leaving a bloody smear. When confronted, he stares blankly and says, “He is dead.” The man will be the center of a legal battle that will resonate across borders and time in “The Collini Case.”

Caspar Leinen (Elyas M’Barek) is a newly minted lawyer, just three months on the job and never pleaded a case before the court. His boss assigns him to defend Collini and tells him that his prosecutorial opponent is Professor Dr. Richard Mattinger (Heiner Lauterbach), a legend in German jurisprudence. Then, he learns that the victim is Hans Meyer, the man who befriended Caspar when he was a boy and mentored him ever since.

Meyer’s granddaughter, Joanna (Alexandra Maria Lara), who happened to be Caspar’s high school sweetheart, is vehemently against him taking the case. Despite all of the personal conflicts he must deal with, he takes the job of defense attorney. What he finds as he digs into the past – both Collini’s and Meyer’s – is stunning and the seed that will lead to a story of deceit, murder and cover up. You just have to see “The Collini Case” to find out the shocking details.

“The Collini Case” will be available in both dubbed and subtitled versions digitally on June 5, 2020.