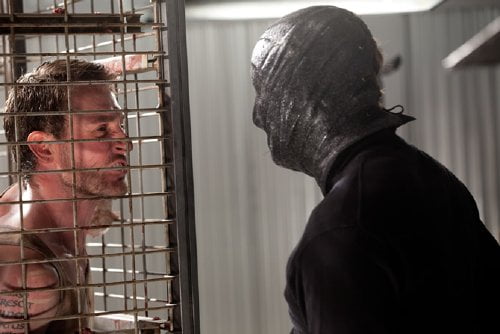 When Arkin (Josh Stewart, "The Collector") tried to reluctantly rob his employer, he found himself instead trying to save the Wharton family from a serial killer who had booby trapped their estate. He also was the only survivor, but did not escape The Collector (stuntman Randall Archer). Now another wealthy girl, Elena (Emma Fitzpatrick, "In Time"), has wandered into the madman's grip and, after he has successfully escaped, Arkin is forced back inside the killer's home base, the abandoned Hotel Argento (nod, nod, wink, wink), where he keeps "The Collection."

Cowriter (with his "Saw's IV-VI" and "The Collector" collaborator Patrick Melton, )/director Marcus Dunstan used more than a little of their "Saw" experience in "The Collector," but it was such a well done little nasty piece of work, one could overlook the unoriginality of its construct (heck, even a thief getting caught up in the net of a bigger crime has been done before). But even though the filmmakers begin their sequel right where the original film ended, they've lost it. A television news montage about fifty missing people to set the stage intercut with the back story explaining wealthy Mr. Peters' (Christopher McDonald, "Happy Gilmore") overprotective nature towards his daughter is lazily put together and rambling and Elena's decision to slip out with two friends to attend a password protected ('Nevermore') rave in a shady neighborhood seems all the more foolish when her city's citizenry are hunkered down. Then comes the slaughter and the film turn into just another "Saw" sequel (minus the flimsy moralizing) with the elements of "Silence of the Lambs" that hung over the first one combined with a genuflection to "The Human Centipede." As Arkin, Archer is a shadow of himself, not the same man we rooted for before. As Lucello, Elena's lifelong hired protector, Lee Tergesen ("Monster," "Red Tails") is a bit more interesting, although the opening action handed to his team by the screenplay seems ludicrous given the victim reportage we've heard. The film has plenty of gore and gross outs, but not much in the way of imagination. Sets have the same dingy look as the "Saw" films and no explanation for the elaborate mechanisms and displays inside an abandoned building are given. A final epilogue leaves one wondering what the next will be called should this one do well enough to procure financing.