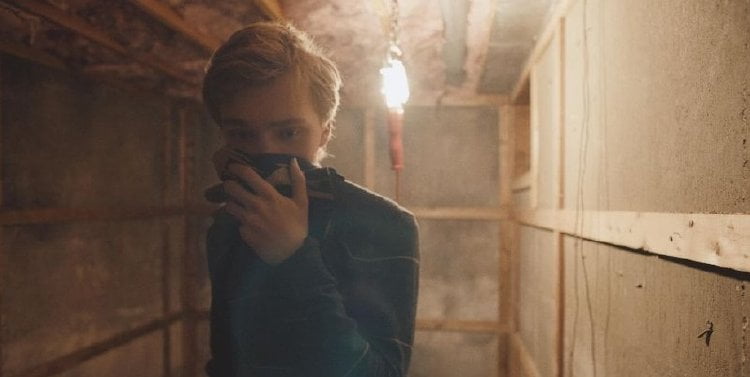 Every year a small town in Kentucky holds a memorial service for the ten victims of a serial killer. The murders ended ten years prior, but the killer was never caught. 'At the time I didn't think about it too much,' Tyler Burnside (Charlie Plummer) tells us, but when a date finds an explicit bondage photo in his dad's truck, Tyler begins to suspect his troop leader dad (Dylan McDermott) just may be "The Clovehitch Killer."

Here's an unusual take on the serial killer thriller, one which places the ramifications on family of stepping outside conservative morals in small town America on equal footing with the crimes at its core. The killer appears to be loosely based on the BTK killer Dennis Rader, a Kansas cub scout leader, church council president and family man who pled guilty to ten murders in 2005. Dylan McDermott plays his version of the church-going family man with an unsettling corny wholesomeness, but while Plummer draws us into his plight, putting us on edge as he pokes his nose into risky places, his teenaged investigations are difficult to buy into, he and his coconspirator Kassi (Madisen Beaty) like a Hardy Boy and Nancy Drew in over their heads. (Tyler's seeming concern for his family's reputation over that of Clovehitch's victims is also troublesome.) Writer Christopher Ford ("Cop Car") smartly introduces his theme early, that bondage photo starting a viral whisper campaign labeling Tyler a pervert, a personal experience Tyler can magnify imaging just what would become of the Burnside family should his dad turn out to be Clovehitch (the moniker refers to a type of knot that Dan would be readily familiar with given his scouting leadership). At church, Amy gives Tyler the stink eye. Outside, fellow scout Billy (Lance Chantiles-Wertz) moralizes at him as they both note town outsider Kassi, known for her obsession with all things Clovehitch, sitting across the street, both wondering what she's up to. Couponing with his mom Cindy (Samantha Mathis) for a food drive, Tyler questions why dad isn't helping. 'He has his own hobbies,' mom replies as Tyler observes his dad unlocking his shed at the back of their yard. Tyler figures out the combination lock and checks every drawer and box inside, about to leave when he notices an irregular floor board. Sure enough, deposited beneath is a shoebox containing several hardcore bondage magazines and a Polaroid of a bound woman inscribed 'Nora - Lucky's favorite.' Later, he's caught on the family PC in the middle of the night by his mom, just after he has confirmed one of Clovehitch's victims, Nora Devlin. The next day, dad stops Tyler for 'a talk.' Nervous, Tyler thinks his snooping has been noticed, but instead it seems mom has heard about that picture, Dan telling his son that while fantasies are perfectly normal, pictures are a no-no (and this is a hole in Ford's plotting, as Tyler's acquiescence would surely raise a flag with dad). Tyler then runs into Kassi, stopping her to beg for information on Clovehitch. Turns out, she has a secret of her own and the duo's joined forces lead them to the truth. Director Duncan Skiles gives his creepy climax two perspectives. After ridding himself of his family, Tyler sent to leadership camp, Cindy and daughter Susie (Brenna Sherman) off to visit grandma, Skiles tails Dan as Dan stalks a woman, stopping at a critical moment to switch to Tyler's parallel viewpoint. McDermott's matter-of-factness during increasingly disturbing behavior is skin crawling, made all the more eerie set in Skiles's depiction of small town virtue. The addition of family member Uncle Rudy (Mark A. Nash), Dan's brother dealt nonverbal life in a wheelchair by an apparent car accident, lends an additional air of mysterious possibility to the proceedings. "The Clovehitch Killer" is a well-acted and directed consideration of a serial killer's living victims, his own family, but it isn't entirely satisfying, Clovehitch's psychology opaque, his son's motivations favoring self interest over justice. Grade: