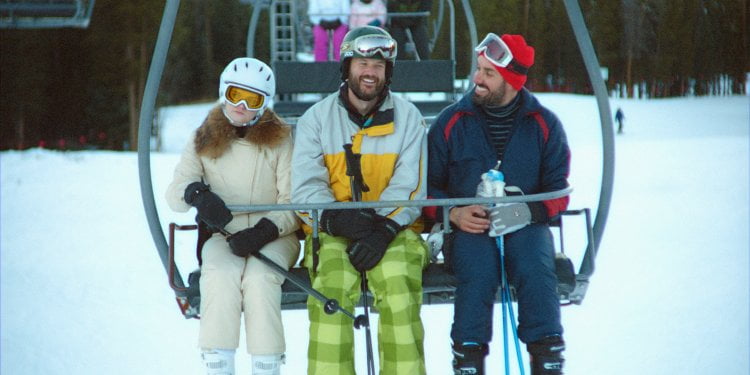 As experienced cyclist Mike (Michael Angelo Covino) talks about ‘cadence’ pedaling up a hill, his eager-to-please friend Kyle (Kyle Marvin) huffs and puffs behind him, veering erratically.  Kyle’s about to be knocked back by more than the hill, though.  Excitedly sharing the news that he is going to marry fiancée Ava (Judith Godrèche, "The Overnight") he doesn’t get the typical Best Man response, as Mike informs him he’s slept with her in “The Climb.”

Cowriter (with costar Kyle Marvin)/director/star Michael Angelo Covino proves that not all shorts expanded into features are full of filler.  Based on an exaggerated and fictionalized look at his own real friendship with costar Kyle Marvin, “The Climb” is not only funny and insightful, but full of cinematic invention, its scenes transitioning on everything from singing gravediggers to pole dancing karaoke to a tracking shot of a dog that takes us from Thanksgiving to Christmas.  This is one of the most delightfully creative comedies I have seen in some time.

As with most buddy movies, much of the comedy is generated from a contrast in personality.  If at first Mike seems fairly reasonable, Covino quickly disabuses us of that notion by getting into a fist fight with the French driver who dared honk at him on two wheels.  This will become a repetitive pattern, as will his predilection for Kyle’s women.  Even Kyle’s mom Suzi (Talia Balsam, "South Mountain") invites Mike over for Christmas at a particularly low point in their friendship, although she, at least, advises him to stop being selfish.  She also shares her negative opinion on her son’s most recent fiancée Marissa (Gayle Rankin, "Blow the Man Down," "Her Smell") with predictable results.  The more laid back Kyle has an immense capacity for forgiveness.

Covino, who looks like Jason Mantzoukas and sounds like Casey Affleck, has that uncanny knack for making a character do obnoxious things yet keeping it believable that everyone who purports to be fed up with him invites him back into their circle.  He is the instigator to Marvin’s likable straight man.   Keep your eyes peeled for Cheers’ George Wendt as Kyle’s dad Jim.

There is much to delve into in “The Climb” as well as much to admire in the way Covino and Marvin execute it.  The film climaxes with a “Graduate” homage and rolls out on training wheels.  You gotta love these guys.