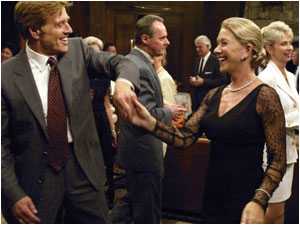 Wayne and Eileen Hayes (Robert Redford and Helen Mirren) appear to have attained the American Dream. They have financial freedom and a beautiful home but danger lurks nearby. One day, just like any other day, Wayne heads to the office with the promise to be home in time for a dinner party. When he doesn’t show up in time, Eileen is angered and hurt. But, later that night when he still doesn’t show, she starts to worry that something bad has happened in “The Clearing.”

Producer Pieter Jan Brugge (“The Insider”) makes his directorial debut with the story he conceived with novelist Justin Haythe (who wrote the screenplay for “The Clearing”). Things start off simply enough as Eileen wakes Wayne for work. He dresses and gulps down his coffee as she reminds him of their plans for that evening. He kisses her goodbye, gets into his fancy car and drives off. At the end of the driveway he stops to pick up his newspaper. It’s just another day in the life of the Hayes family until Wayne fails to show for dinner. When he is still not home later that night, Eileen calls the police. From here, we flash back and forth between Eileen and Wayne. She contacts the FBI in fear that her husband was kidnapped. Her fears are founded when we see, through another pair of eyes, Wayne stop to get his paper. As he is about to drive off, a man rushes up to the car calling Wayne’s name, jumps into the passenger seat and pulls a gun on the startled Hayes. Wayne soon realizes that he is the victim of a kidnapping. The FBI, in the person of special agent Ray Fuller (Matt Craven), take over the Hayes’s home and set up a base of operations to trap the kidnappers. Fuller utilizes his agency’s kidnapper play book as they try to put clues together and wait to be contacted by the criminals. Meanwhile, we watch as Wayne’s captor, Arnold (Willem Dafoe), leads him, bound at the wrists, into the woods with the promise that he is only taking him to a cabin to hand Hayes over to Arnold’s employers. The stories jump back and forth between Eileen and her children, Tim (Alessandro Nivola) and Jill (Melissa Sagemiller), and Wayne’s ordeal in the woods, building to the film’s climax. The story for “The Clearing” has a sparse feeling that takes liberties with the time-lines for Eileen and Wayne. I’m not sure if my initial confusion over the events and times the two story paths take is my fault or if the spare script leaves too much for the viewer to figure out. I had some “aha!” moments as the story progressed, leading me to think that much of the plot’s development was cut out of the finished product. It’s pretty slim pickings once you get away from the three principle actors in “The Clearing.” Helen Mirren fares best and is called upon to bear the biggest burden as Eileen Hayes. Even though she is surrounded by her children, grand child and FBI agents, Mirren gives a virtual one-woman performance as the distraught wife. Redford and Dafoe have the benefit of playing off each other and the two veterans run with it. Of the supporting cast, only Nivola gets anything that helps propel him from the two dimensional. Melissa Sagemiller is particularly vapid as the Hayes’s daughter Jill. Lenser Denis Lenoir keeps his camera close as he follows Wayne and Arnold during their trek through the wood, giving the proceeds a claustrophobic effect. Other techs pass muster well enough. There is a dramatic film in “The Clearing” but it is not on the screen. I fear that much of the richness of the drama may be on the cutting room floor. Fortunately, the depth of the characters provided by Mirren, Redford and Dafoe help make this a better film than it should be. I wonder what it would have been like in the hands of an experienced director.