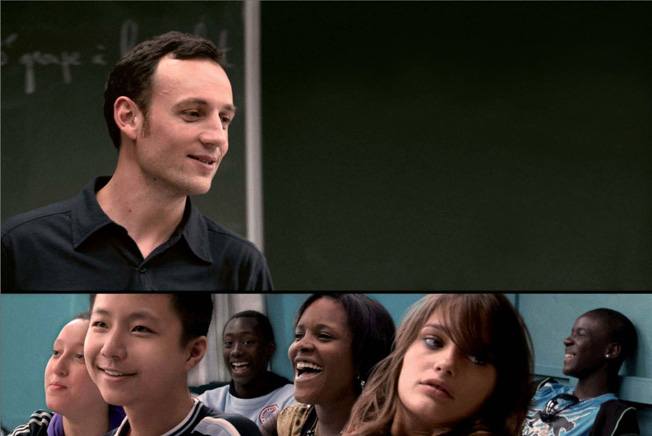 In a tough Parisian neighborhood self-segregated by racial and cultural divides, a teacher, François Marin (played by the teacher, François Bégaudeau, who adapted his own book for the screen), tries to connect with his students and get them to connect with each other by leading them into intellectual exploration from issues which impact their own lives. Over the course of the school year, François will see one promising kid beaten down by the system, another jeopardized by his parents' immigration status and be challenged by many in "The Class."

Director Laurent Cantet ("Time Out," "Heading South"), who has made two films reflecting on the trials of the workplace, now turns his attention to the system that it supposed to prepare today's youth to go out into it. His documentary-like drama is akin to an urban counterpoint to the more idyllic, country school room documented in 2002's "To Be and To Have," injected with some "To Sir, With Love" and a little bit of "Freedom Writers." This 2008 Palme D’Or winner and France's entry for Best Foreign Language Film is an extraordinary example of what can be accomplished with non-actors working improvisationally. The film begins by introducing us to the school's teachers and administrators, as many of them are being introduced to each other. There is a strong solidarity among them, even as they have different approaches to dealing with some very tough charges. Disciplinary measures are the biggest topic of debate. In Marin's class lives a microcosm of Parisian society. There are the African immigrants who vie with their Hispanic counterparts. There are Asians who are quiet and girls who are forceful and one lone Goth who keeps to himself. Marin walks a fine line trying to provoke these kids towards the knowledge and intellectual curiosity that will prepare them for life while still holding the reins of his class and keeping the environment nonthreatening. His job is shown to be rewarding, such as when he encourages class troublemaker Souleymane (Franck Keïta) when he produces original work, and frustrating, when that same student goes before a school disciplinary board which Marin can only try to influence. There is the surprise of a female student, Khoumba (Rachel Régulier), usually a bright contributor, shutting down and becoming insubordinate while another, the usually bossy, mouthy Sandra (Esméralda Ouertani), shocks with the revelation that she's read Plato's "The Republic" of her own volition. These kids step in and out of stereotype, as does François, rattling even the audience's cage when he says two female class delegates 'acted like skanks,' upending our judgement of him and creating a rift with his class which he must work politically to repair. Cantet and Bégaudeau began their casting search at the Françoise Dolto Junior High in Paris' 20th arrondissement, and, while they did not film there, chose their entire class of twenty-five from fifty who attended workshops. The school's counselor and assistant principal were also cast in the movie and Cantet gets not one false note from any of them. These kids are given ideas, the same ideas Bégaudeau introduced to his class and wrote about, and then they fly with them, using their own lingo and backgrounds to inform their dialogue. Cantet, like his author, cuts away from the obvious down times that occur in any classroom and shapes his film like a bouncing ball, one event leading into another. The film feels incredibly natural and was filmed with a multi-camera technique devised to capture the classroom without intruding upon it. It is a bustling, boisterous work dotted with quieter moments - the reaction to a teacher melting down in a break room, the reaction of a class to bad news pertaining to one of their own. Throughout the history of film, there has been the tale of the inspirational teacher, from the hallowed halls of British boarding schools to the rough and tumble of the ghetto. Cantet and Bégaudeau give us more of a slice of reality, a classroom of injustices, small triumphs and impasses led by a passionate but not infallible man trying to work within the system. "The Class" is simply one of the best of its class.

Based on a real life clan, director/writer Pablo Trapero brings us to 1983, just after the fall of the Argentine dictatorship. Arquemedes Puccio was a member of the intelligence service who, like others in the former government, lost his job. But, owning a food shop is not going to get the Puccio family the privileges of the wealthy in the city. He urges his rugby star son Alejandro (Peter Lanzani) to pick out likely kidnap-for-ransom victims among his friends. Their first kidnapping, of Alex’s friend Ricardo, goes off well enough and the ransom is paid. But Ricardo tries to get away and is shot three times in the head. This leads to another kidnapping and murder and another and another. It took years before the police were able to shut the Puccio family down. At the center of “The Clan” is its patriarch, Arquimedes, and Guillermo Francella, a comedic actor by trade, gives a chilling performance as the ruthless clan boss. His piercing blue eyes look right through you as he deals life and death without passion. The rest of the members of the Puccio family, except the youngest daughter, Adriana (Antonia Bengoechea), were all implicated in the brutal crimes. Performances all around are first rate. Pablo Trapero shows deft skill in directing his talented cast and telling the shocking true story of the Puccio family. He and his crew capture the look and feel of the 80s and Argentina, paying attention to the period details