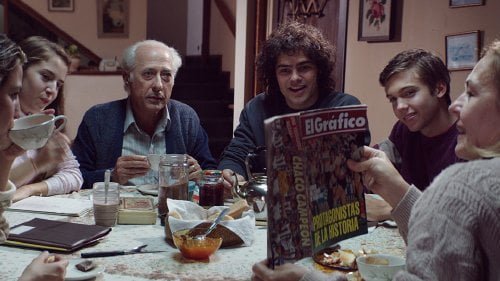 Arquimedes Puccio (Guillermo Francella) is a respected store owner in Buenos Aires with his family all around him helping out. But, they also run another family business that is not so respectable – kidnap and hold for ransom the scions of the city’s most wealthy in “The Clan.”

After Argentina's return to democracy in the early 80's, Arquímedes Puccio (Guillermo Francella, 2009's "The Secret in Their Eyes") no longer has work in secret intelligence for the military dictatorship (he is presumed to have helped with the infamous 'disappearances'). Puccio resented the wealth business collaborators had accumulated, something he couldn't hope to replicate with his San Isidro deli. The patriarch turned to what he knew - kidnapping, extortion and murder - and pulled the sons who had looked up to him into his criminal activities as "The Clan." Writer/director/coeditor Pablo Trapero ("Crane World," "Carancho") continues his sociopolitical themes, this time with an absorbing true crime thriller which focuses on the relationship between a father and son. Alejandro Puccio (Peter Lanzani) was a locally revered rugby player whose friendship with a wealthier teammate proved both of their doom. Trapero's film shares some of the eerie economical horror of Mexico's 2011 film "We Are What We Are" (remade in the U.S. in 2013), but his is more horrifying given the looming shadow of Argentina's recent history and the utterly corrupt evil which Francella conjures. After witnessing Arquímedes paying respects to outgoing military leaders, we're introduced to his family, a large, loving group consisting of Alejandro, Silvia (Giselle Motta), Guillermo (Franco Masini), Adriana (Antonia Bengoechea) and Epifanía (Lili Popovich), the mother who cooks their meals. The only note of discord is the absence of Maguila (Gastón Cocchiarale), the son who left for New Zealand, something which clearly rankles the family patriarch. Soon after Alex, as Alejandro's friends call him, celebrates another team victory with Ricardo Manoukian, he engages his friend for a lift after his car breaks down. We observe from the back seat, cinematographer Julián Apezteguia ("Carancho") employing long takes following the action, as 'Lazing on a Sunday Afternoon' blares on the soundtrack. The happy scene is jarringly aborted when we learn it's all a ruse - another vehicle pulls in front of Ricardo's car, masked men point guns and place cloth bags over the occupants' heads, shoving the driver into their trunk. The mean in the lead is unveiled as Arquímedes. Back at home Epifanía dishes out a plate of chicken and rice for the young, sobbing man shackled in their bathroom. A ransom is requested and received, but Alex is truly shocked when, days later, his teammates inform him that Ricardo's been found in a dump with several shots to the head. Dad explains that Alex's story wouldn't have held up and gives his son stacks of bills, enabling him to open the sea sports shop where he'll befriend their next victim and meet his eventual fiancee, Mónica (Stefanía Koessl). As Alex becomes more and more disturbed by his family's criminal activities, Trapero increases the flashforwards of their final crime. Alex's refusal to cooperate in his father's third kidnap of a former friend results in disaster. Young Guille, who hasn't participated but is aware, follows in Maguila's footsteps just as the older son is brought back into the family fold and its murderous activities. Arquímedes seeks help from his former political cronies only to be told he's on his own and just as Alex is about to slip his father's noose, everything caves in. Trapero's wrap is every bit as incomprehensible as what has come before, the far reaching effects of a father on his family almost as horrifying as what has happened to his victims. There is something quite uncanny in how Apezteguia frequently lights Francella, his pale eyes seeming to absorb light and reflect it back, like beams of evil. The jaunty pop standards used on the soundtrack are jarring, an outward indication of happy lives cloaking terror and ugliness. "The Clan," a Venice Film Festival award winner and Argentina's submission for the Foreign Language Oscar, is a shocking truth-is-stranger-than-fiction tale, a country's dark history taken root in a suburban neighborhood. Grade:

Based on a real life clan, director/writer Pablo Trapero brings us to 1983, just after the fall of the Argentine dictatorship. Arquemedes Puccio was a member of the intelligence service who, like others in the former government, lost his job. But, owning a food shop is not going to get the Puccio family the privileges of the wealthy in the city. He urges his rugby star son Alejandro (Peter Lanzani) to pick out likely kidnap-for-ransom victims among his friends. Their first kidnapping, of Alex’s friend Ricardo, goes off well enough and the ransom is paid. But Ricardo tries to get away and is shot three times in the head. This leads to another kidnapping and murder and another and another. It took years before the police were able to shut the Puccio family down. At the center of “The Clan” is its patriarch, Arquimedes, and Guillermo Francella, a comedic actor by trade, gives a chilling performance as the ruthless clan boss. His piercing blue eyes look right through you as he deals life and death without passion. The rest of the members of the Puccio family, except the youngest daughter, Adriana (Antonia Bengoechea), were all implicated in the brutal crimes. Performances all around are first rate. Pablo Trapero shows deft skill in directing his talented cast and telling the shocking true story of the Puccio family. He and his crew capture the look and feel of the 80s and Argentina, paying attention to the period details