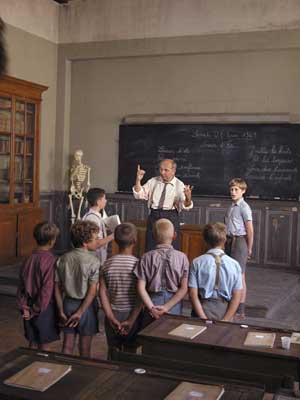 Unemployed musician/composer Clement Mathieu (Gerard Jugnot) takes a job at a rural reform school for delinquent boys. Headmaster Rachin (Francois Berleand) rules the school with an iron fist, meting out corporal punishment and solitary confinement for the least infraction by his charges. Mathieu eschews his boss's cruel methods and turns to his love of music as the means to get to the hearts and minds of the boys in "The Chorus."

In 1949 Clement Mathieu's (Gerard Jugnot) musical career has gone nowhere, so he accepts a position as supervisor at the ironically named boarding school, Fond de L'Etong ('rock bottom'). To his surprise, his charges are troubled boys under the care of Dickinsonian principal Rachin, but the boys' sing-song taunts inspire him to begin "The Chorus." France's submission for 2004's Foreign Language Film seems a calculated effort to appeal to the Academy, as it clearly is not anywhere near the best that country has to offer (Godard's "Notre Musique" is just one obviously superior, if risky, choice). Director Christophe Barratier's slight and sentimental film does have its charms, though, especially in his sure-handed direction of the pre-teen cast and Jugnot's warm central performance. The film is bookended with a modern, New York City setting where a triumphant concert is followed by bad news about the conductor's mother and a visit from a childhood friend, Pepinot, he hasn't seen in fifty years. Pepinot delivers their former teacher's diary, which reveals the genesis of the conductor's career in a teacher's faith as well as the man's bittersweet, unrequited love for his mother. Mathieu's arrival at Fond de L'Etong bodes ill - he meets Pepinot (Maxence Perrin) at the gate, waiting for Saturday when his parents will visit (Pepinot has not been told he's an orphan), then is belittled by Principal Rachin (Francois Berleand), who demands he be addressed as if Mathieu were a student rather than a colleague. No sooner is he given over to the school custodian, Maxence (Jean-Paul Bonnaire), than the man is seriously injured by a thrown rock. Rachin refuses to call a doctor, not wishing to pay the fee, but instead insists Mathieu call a school assembly then asks that he arbitrarily choose a boy for punishment when the perpetrator doesn't step forward. Mathieu's predecessor is leaving because of a ten inch scissor slash received from one of the boys and his other colleague embraces Rachin's disciplinary motto of 'Action, Reaction!' by smacking any student who dares to talk at mealtimes. Mathieu quietly employs his own method for dealing with misconduct, beginning with Le Querrec (Cyril Bernicot), a boy with angelic looks who always takes the blame. In this case, he is indeed guilty of Maxence's injury, but learns a lesson when Mathieu asks that he volunteer in the infirmary to care for his victim in lieu of being turned in. After leaving his class in the hands of Morhange (Jean-Baptiste Maunier), he returns to a blackboard caricature titled 'Baldy,' his students' derogatory name for him, and responds in kind with a clownish rendering of Morhange. Auditions for his choir reveal Morhange to be truly gifted and Mathieu grooms the boy, encouraging his single mother, Violette (Marie Bunel), to allow him to apply for a scholarship at a musical academy while also wooing her so quietly, she fails to notice. Barratier is adept at handling the light side of his story, weaving the chorale score in and out of the action and providing two uplifting codas to his story's depressing climax, but he sweeps the darker elements under the rug, never fully developing the aspects which could have given his film weight. As punishment, children are locked into darkened solitary, but we never get a sense of the length of this confinement nor its psychological harm. An older bully, Mondain (Gregory Gatignol), is introduced, yet he merely serves the plot, his revenge for unjust treatment at the hands of Rachin coming out of left field with no basis in reality. Barratier takes the typical montage route to show the choir's development, including a beautiful profiled silhouette of Mathieu drawing Morhange's posture into place by centering his index finger on the boy's head, like a puppet on a string, but Rachin's whimsical delight in the sounds of the voices is totally out of character. Rachin disbands the choir, forcing it 'underground,' when his cash supply is stolen by one of his charges. Jugnot, largely keeping a stoic face, convinces of his characters care and understanding of his boys. He becomes slightly more animated while conducting, clearly exulting in his music. The film's one truly comedic moment rests in the actor's slapstick dash to spruce himself up when Violette comes to visit her son. Casting of the kids is excellent, with Maunier's earnest finding of his voice, Bernicot's hangdog inevitable misconduct, Gatignol's leering menace and Thomas Blumenthal's dumb acceptance of his position as the 'music stand.' Simon Fargeot is the standout funny face and young Perrin is adorable as Mathieu's sad little mascot Pepinot. "The Chorus" joins the singularly French boy's school genre of "Zero de Conduit", "Diabolique" and "Au Revoir Les Enfants," but will fail to have the lasting impact of those fine films. This is a prime example of one of those movies manufactured for the art house crowd, like Miramax's "Chocolat" - it's sweet but the calories are mostly empty.

The French meet "School of Rock" in this period piece, set in 1949 France, about an out of work musician who takes the job as Supervisor at a rural school for problem boys. Here, in typical Gallic style by helmer Christophe Barratier (working from his script co-written with Philippe Lopes-Curval), we have a dysfunctional school strictly overseen by Le Director Rachin, a hard-hearted and brutish martinet who would rather punish his wards than educate them. Enter Clement Mathieu, a former musician and composer who abandoned his unsuccessful calling to take the job as a lowly supervisor at the Fond de l'Etang school for troubled and orphaned boys. He is shocked by Rachin's often-cruel treatment of the young students for any number of infractions and, early on, decides that he will teach and treat his pupils his own way - regardless of the director's policies. But, these are tough kids conditioned by the harsh punishments by Rachin and their first reaction to their new teacher is to nickname him "Baldy" and "Bullet-head" and immediately begin to badger Mathieu. When the rowdy class attracts the director's attention it looks like the disciplinarian will rule. Clement, though, covers up for his students' infractions and a spark of respect and admiration is ignited in the boys, except from problematic Pierre Monhange (Jean-Baptiste Maunier), who the Rachin deems "a devil with the face of an angel." As Mathieu insinuates himself into his students' new-found trust he decides to introduce something new to them, something the teacher knows and loves - music. He forms his reluctant charges into a choir, of sorts, placing them into vocal groups of alto, tenor, soprano and basso. His main opponent is the sullen and withdrawn Pierre, a boy fearing abandonment by his pretty, single, working mother, Violet (Marie Bunel). Pierre has a voice to match his angelic good looks and Clement is fast to overcome the boy's psychological obstacles and recruits him as the choir's soloist. Pierre is such a talented singer that Mathieu pulls what meager strings he can to get the lad an audition at a prestigious music school. As if the challenges Clement faces aren't enough - unruly students, a closed-minded/closed-hearted boss, depressing environment, loneliness - the filmmakers introduce yet another stumbling block with the introduction, to the school, of Mondain (Gregory Gatignol). The cigarette-smoking, rule-breaking boy is sent to Fond de l'Etang to see if disciplinarian Rachin can change Mondain's wicked ways. He can't and jumps at the chance to accuse the boy of theft and have him sent away to real incarceration - which makes for one of the film's "huh?" moments later on. "Derivative" could be the word to describe "The Chorus." Besides "School of Rock," direct comparison can be made to such other notable films as "The Blackboard Jungle (1955)," "To Sir, with Love (1967)" "Mr. Holland's Opus (1995), "The 400 Blows (1959)" and, even, "Cinema Paradiso (1989)." But, the "nice" screenplay for "The Chorus" makes this derivativeness take a back seat to the story of a man of kindness and compassion who has the true desire to teach his students and, in the case of golden-voiced Pierre, help them to break away from the sometimes staggering oppression of the reform school and its headmaster. "Acting" is pretty much relegated to the adult performers in "The Chorus." Popular French comedian Gerard Jugnot gives a sweet, endearing performance as musically inclined Mathieu. He immediately puts himself in a position, once in the classroom, to gain the trust of his students despite the interfering intolerance of the headmaster. We've seen the character plenty of times in the past (just check out the titles I mentioned earlier in this review) but Jugnot makes it his own here. Francois Berleand gives a mustache twirling, bad guy performance as the headmaster who blames his charges and not himself for his position in life. His tyrant of a school director is one-dimensional, except for a misspent attempt to humanize the man, but this is what the film calls for. The boys of the choir are non-actors and aren't called upon to do much but look cute, tough, troubled or dysfunctional. Maunier, as Pierre, is the principle character among the kids but an experienced young actor would have better served the role. The boy does have a golden throat, though. Barratier and Lopes-Curval's screenplay makes no new statements and walks upon well trodden territory but the heartfelt nature of the story and the sheer niceness of the main character, Clement, make it a cut above the ordinary and routine. The music, some of it original and composed by the helmer, helps to raise the bar, too. While I could not find a reference to it in the press and promo material for "The Chorus," the plot is also a dead ringer for that of the 1945 French film, "A Cage of Nightingales," right down to the storyline and the names and personalities of the lead characters Mathieu and Rachin. "The Chorus" has entered the pantheon, in France, as one of the top grossing films ever. It comes close, at times, to overt sentimentality, but walks that tightrope with deftness that keeps it from being a teary-eye soap opera. Instead, it tells of an intelligent, caring man who uses his inherent kindness to reach and help his wards despite the obstacles he and they must face every day.