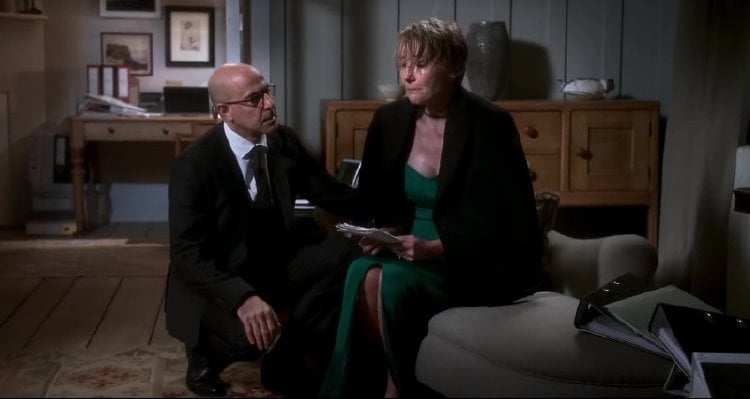 British High Court Judge Fiona Maye (Emma Thompson) has just traversed the media frenzy surrounding her latest case on the separation of conjoined twins when her professor husband Jack (Stanley Tucci) makes an appeal for focusing on their neglected marriage. Jack tells her he's on the verge of embarking on an affair when they're interrupted by a phone call from Fiona's clerk Nigel (Jason Watkins) about an emergency ruling involving the not quite eighteen year-old Jehovah's Witness Adam Henry (Fionn Whitehead, "Dunkirk"), a leukemia patient refusing a life-saving blood transfusion because of his religious beliefs. Fiona angrily rejects Jack's proposal and turns her attention to "The Children Act."

Is there another actor with the ability to make us cry like Emma Thompson? Put her in a sympathetic situation and that combination of intelligence and those sad, brown eyes pull us into her character's emotional state. We're with her all the way here as Fiona struggles to get the religious Henry family to use scientific logic while upholding the same kind of rigid beliefs as theirs about her marriage vows. This is the second of his own books Ian McEwan has adapted for the screen this year and the results have been exactly the opposite of what I would have expected. Where "On Chesil Beach" was such an emotional experience on the page, its adaptation was lacking. "The Children Act" was a lesser novel, yet the adaptation sings under the direction of Richard Eyre ("Stage Beauty," "Notes on a Scandal"), its themes more evident in the hands of a never better Thompson and the astonishing Whitehead, who beautifully captures the ethereal complexity of Adam Henry. The film gives us a bird's eye view of the workings of the British court and the immense workloads carried by judges like Maye, their stresses exacerbated by their frequent life or death nature. Maye has a cordial yet distant relationship with clerk Nigel, who treats the judge addressed as 'Milady' like royalty. She walks down a pristine red carpet and raps on a door before entering her court, which she presides over from on high. She respectfully listens to the arguments of Adam's parents, Kevin and Naomi Henry (Ben Chaplin and Eileen Walsh), who talk about blood as the essence of life, something which should not be tainted with another's, as well as just how remarkable their son is. A doctor describes how dire Adam's situation is and how awful his death will be without the transfusion. Fiona makes the unusual decision to visit Adam before handing down her judgment. The meeting is a high point of the film, the dying young man at the center of Fiona's case angelic, intellectually curious and very smart (Fiona bursts into surprised laughter at his response after asking him what he'd she if she ruled in favor of the hospital). The two have a palpable connection, one which ends in a duet of 'Down by the Salley Gardens' after Fiona notices Adam's guitar in his room. He pleads with her to stay longer, but his Milady is a busy woman. But Adam is persistent, and, as it will be of little surprise how Fiona rules given the film's title, she is forced to rebuff his ardent pursuit again and again. Music is an important through line, Fiona at the bench of her Fazioli, revealed in flashback as a birthday gift from Jack, whenever she's not working. A Christmas piece she's working on with colleague Mark (Anthony Calf) builds into a climactic performance, Thompson's emotions shattering. This may be the finest work of her career. She and Whitehead pull off their strange romance as a mystical mind meld, Whitehead symbolic of both her work and the child she never had. If the film has a single weakness it is in the miscasting of Tucci whose American brand of directness is at odds with the singularly British displays of formality and court romance this tale lives in. Grade: