The Chef's Wife (On a failli être amies) 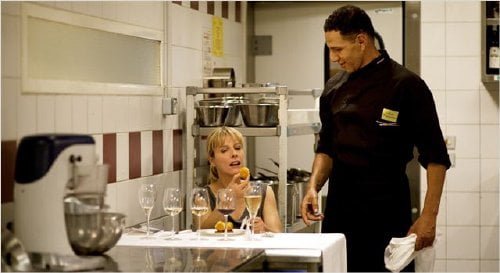 Marithe (Karin Viard) works at an adult re-training center helping people find new careers. Her latest client, Carole (Emmanuelle Devos), was just laid off from her job and wants to get another before her husband, restaurateur Sam (Roschdy Zem), finds out. This begins a friendship that will shake up the women’s lives in “The Chef’s Wife.”

Marithé's (Karin Viard, "Time Out," "Polisse") got her hands full, retraining a roomful of women who've recently been laid off from a toy factory. But there is one woman there who is obviously out of place and when Carole's taken out by her ex Pierre (Philippe Rebbot, "Hippocrates: Diary of a French Doctor") and his wife Nathalie (Anne Le Ny, "The Intouchables") to celebrate her birthday at the Michelin starred Le Moulin Blanc that evening, she sees her again and is pulled into conspiracy by "The Chef's Wife." Writer/director Anne Le Ny's ("Those Who Remain (Ceux qui restent)") attempt at combining the romantic comedy with a tale of female friendship is misguided and tonally off, stranding its lead actresses in roles that make one look prickly and selfish and the other foolish. The film's French title has been completely changed in a bald-faced attempt to appeal to the foodie movie crowd, but do not be fooled as cooking is not what this movie is about. After being led to their table by Carole Drissi (Emmanuelle Devos, "Read My Lips"), Marithé is led into a lie, the woman from earlier in the day declaring her 'a friend from gym class.' When she appears at Marithé's work the next day to apologize, she asks for individual consulting, saying she needs a career change. What she's obviously really looking for is a break from her husband, Sam (Roschdy Zem, "Days of Glory," 2010's "Point Blank"), having become discontent consumed by his career. Marithé keeps her at arm's length, but agrees to help. When all her software will conclude is that Carole is suited to be a falconer, guilt drives her into silly predicaments trying to help Carole find her destiny. This is largely because Marithé has instantly fallen for Sam herself and so it is in her best interest to see that Carole break from him. Her betrayals mount up until she's even affected Sam's work, spilling secrets in his latest foray, a bistro she's placed her toy workers in as waitresses. Somehow Le Ny wraps everything up into a distinctly unsatisfying 'happy' ending. There is little to recommend this film, which lets down both Viard and Devos, only the supporting players, including Le Ny, coming across as sympathetic. Zem is quite believable as the object of desire and the master of a Michelin awarded kitchen, although his character's taste in women is questionable. Grade: