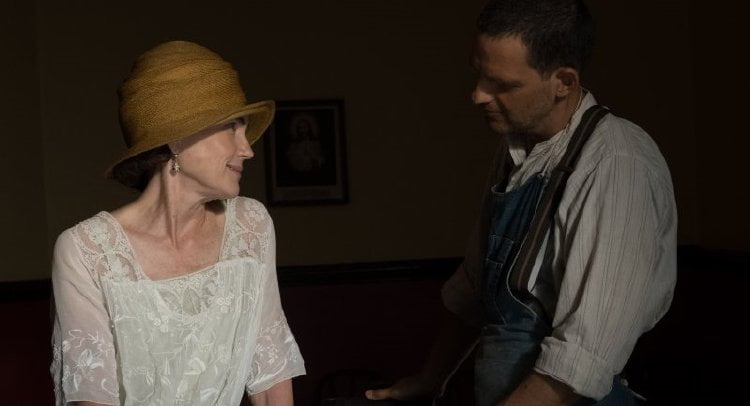 In 1922, free-spirited and talented teen Louise Brooks (Haley Lu Richardson) is accepted to the prestigious Denishawn School of Dance in New York City. But, a young woman cannot travel alone, especially to the big city, and her mother insists that Louise have an adult to accompany her. Enter Norma (Elizabeth McGovern), who volunteers to be “The Chaperone.”

“The Chaperone” marks the first theatrical release from the new Masterpiece Theater distribution label and it features ‘Downton Abbey’s’ director Michael Engler (who is also directing the upcoming theatrical movie), screenwriter Julian Fellowes adapting Laura Moriarty’s book, and star Elizabeth McGovern as the titular Norma Carlisle (she also produces). Unfortunately the film would barely make the grade for Masterpiece’s television programming. It has its charms, largely due to McGovern, but it’s also hokey and its production is lacking, 1922 New York City looking like it was shot on an Ivy League school campus. Moriarty based her book on an item she’d seen about the teenaged Louise Brooks (Haley Lu Richardson) traveling from Wichita, Kansas to New York City to attend a modern dance school (Brooks’s initial interest) with a society matron as a chaperone, using that as a jumping off point. Norma, impressed with Louise’s talent, offers her services but is soon shocked by her charge’s sexually precocious behavior. Louise may laugh at Norma’s prim naïveté, but the young girl also senses a deep rooted sadness in the older woman, an unhappiness in her marriage to Alan Carlisle (Campbell Scott), and attempts to draw her out. Meanwhile Norma tries to trace her roots at a local orphanage. When Sister Dolores shuts her down, Norma turns to the gentle caretaker, Joseph (“Son of Saul’s” Géza Röhrig), who works for board and his daughter’s care, to help her. He does at great risk to himself and the unlikely pair are drawn to each other. Norma must accept some hard truths when she meets her birth mother, Mary O’Dell (Blythe Danner) traveling from Massachusetts to meet her, but she is also inspired to create a radically unconventional family arrangement of her own when she returns to Kansas. She also learns just why Louise grew up so fast in Wichita, a fact that allows us to reassess Louise’s rebellious and somewhat bratty behavior. The film offers scant history on Brooks, her dance school scenes more intent on establishing founder Ruth St. Dennis’ (Miranda Otto) opinion of her as a flirt and jealousy of partner Ted Shawn’s (Robert Fairchild) interest in her than her actual talent. A bookending device is used to show how she reinvented herself (with Norma’s fictitious prodding) after Hollywood spat her out. Grade:

The director and writer team, “Downton Abbey” alumni Michael Engler and Julian Fellowes, adapt the 2012 novel by Laura Moriarty. The story they tell centers on the precocious young Louise as she prepares for what she feels is her destiny – stardom. At least, that is what the story seems at first. Instead, what develops is a character study about, as the title says, the lady who becomes the companion and protector of a teen age girl in the big city, circa the 1920s. This Hollywood fable is about the rising star of Louise Brooks – that is the recurring theme, but not the central one, of the story. But, as I watched Norma’s search to “find out who I am” juxtaposed to Louise’s rise in the dance world, I realized Louise could have been any precocious, talented and spoiled teen and not a future international star. Elizabeth McGovern is fine in the title role of a woman in search of her past, but she and the rest of the characters are stilted and without substance. Campbell Scott, as Norma’s cuckolding husband, and Blythe Danner as the “mystery lady” (spoiler: she is not a mystery) are given less than cameo characters. Haley Lu Richardson is okay as the fun-loving, free-spirited Louise but her bubbly devil-may-care performance has little character arc. Things look very “period” but the depiction of New York City in the 1920s looks like a movie lot set where all is pristine, not like a city awash with humanity. You root, sort of, for Norma to find herself and things all turn out well in a nicely decorated package, but there is not much inside.