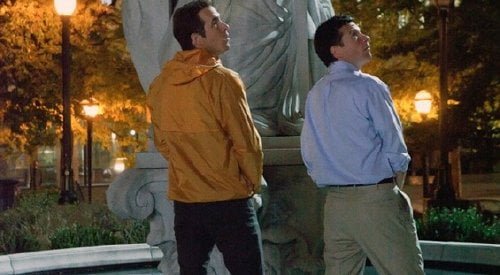 Dave Lockwood (Jason Bateman) is a workaholic family man trying to make partner at his law firm by pulling off a huge merger with a Japanese interest. His best friend since childhood, Mitch Planko (Ryan Reynolds), is an irresponsible pothead actor so commitment phobic he refuses a personal request to attend his own father's (Alan Arkin, sinfully wasted) wedding. When the two go out for a night of baseball and beer, their joint pronouncement that they'd like to have the other's life while urinating in a public Atlanta fountain is made true the next morning in "The Change-Up."

Writers Jon Lucas & Scott Moore ("The Ghosts of Girlfriends Past") try to rustle up the same R-rated, pushing the boundaries humor that turned their "Hangovers" into big box office, but instead, the challenge in reviewing their latest is how to do so without disgusting the reader. If I said the film strains for its R-rated comedy like a constipated fat man and the visual that conjures up elicits a laugh instead of a 'euww,' maybe you'll enjoy it, but I shudder to think what the likes of Ernst Lubitsch, Billy Wilder or George Cukor would think about using the sound of human waste hitting the toilet bowl for comedy. If the extremity of the scatological humor doesn't get you, the fact that the main players act like no human being on earth would should. We're plunged into the film with Dave responding to a 3 a.m. feeding time for his baby twins (Luke and Lauren Bain) and within one minute of run time we're treated to the sight of a full diaper. Cut to boy baby's butt, where a CGI-enhanced rectum is flexing, then sprays dad's face and open mouth with liquid waste. Dave is the classic movie dad who spends too much time at work and his forgotten date with his best buddy means blowing off 'dialogue night' with his wife Jamie (Leslie Mann, "Knocked Up") for about the twelfth week. When Mitch arrives, Reynolds gets to say outrageous things about Dave's wife and kids like how he'd like to strap Jamie to his face while reciting the alphabet and how the twin on the right looks 'a little Downsey.' A film needs more than button pushing. After the boys awaken in their different bods, they immediately return to the fountain only to discover it's been removed 'for renovations.' Boring sequences with the lads dealing with city bureaucracy trying to hunt it down ensue. And so we spend the next hour or so watching each man learn to a) change before b) learning to appreciate his own life again. Now, in deference to comedy, it follows that while Dave tries to instruct Mitch on how to close a big merger and how to feed infants, that Mitch will only mention the bare minimum about his appointments with his first movie role and the nymphomaniac who booty calls him weekly. So, Mitch, of course, wears inappropriate clothing and uses foul language at the law firm while Dave is horrified to discover he's in a 'lorno' (light porn). The way director David Dobkin ("Wedding Crashers") has allowed women to be portrayed here is base to say the least, with even Jamie exhibiting bathroom behavior no woman with an ounce of femininity ever would. The latter comes up because, of course, Mitch has no compunction about using the change-up to attempt to have sex with his best friend's wife. About the film's only saving grace is Bateman's comedy chops, doing the best he can with some truly vile material. Reynolds is OK when he's Mitch, but has only two expressions as Dave which means the bulk of the running time. Mann is a generic wife and mother character when she's not baring her breasts or forced to play ridiculous scenes like Jamie forcing her babysitter to stay and hear her inappropriate sob story. The film also costars Olivia Wilde ("Cowboys & Aliens") as the 'hot' law assistant Dave simmers for who turns out, of course, to be a perfect match for his childish best buddy. Taaffe O'Connell ("Galaxy of Terror") and, to a lesser degree, Mircea Monroe (SHOtime's 'Episodes') debase themselves as Mitch's lorno costar and booty-call-with-a-surprise respectively. Body switch movies have been around for quite a while and the concept offers all kinds of comedic opportunities. There have been some good ones ("All of Me," "Switch," "Face/Off," "Freaky Friday"), but they're few and far between and "The Change-Up" is one of the worst. There's nothing redemptive, heart-warming or life affirming about this cynical, tasteless and plastic piece of product.