The Cave of the Yellow Dog 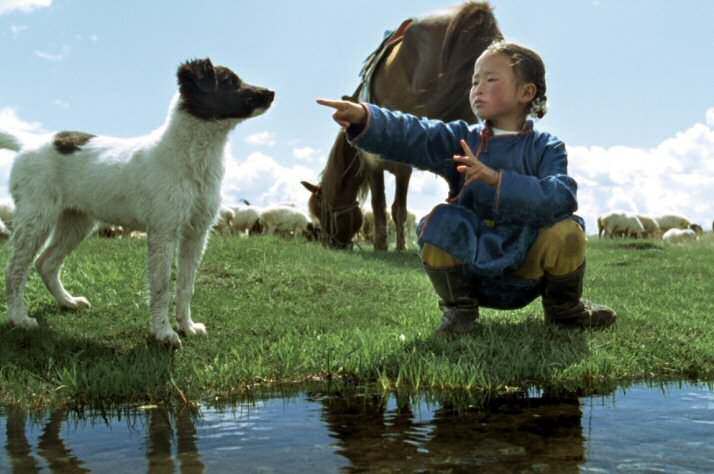 When the young daughter of a nomadic Mongolian herder finds a cute dog in a cave, he tells her she must get rid of it as it may have run with the wolves who are attacking their sheep. But Nansaa is determined to keep the pet - so much so when she tarries to find Zochor on a herding trip, she finds herself too far from home to outride an evening storm. A kindly old woman takes Nansaa in for the night and tells the little girl the fable of "The Cave of the Yellow Dog."

Writer/director Byambasuren Davaa, who gave us "The Story of the Weeping Camel," explores the world of Mongolian nomads a second time with another real family, the Batchuluuns, and it is a culture well worth a second visit. The eternal battle over the stray animals children bring home often to the dismay of parents is made more complex by such considerations as environment and religious beliefs. The film opens with one of these complexities presented in a fable. A silhouetted father and child bury a dog on a mountainside. The father teaches that one should always bury a dog with its tail beneath its head, so that it will be reincarnated as a pony tailed person rather than a dog with a tail. When we join the Batchuluun family - mother, father, Nansaa, younger daughter Nansalmaa and a toddling boy, two sheep have just been lost to wolves and Nansaa has just returned from a stay in the nearest town, where she stays with an uncle while attending school. Although very young, Nansaa is beginning to be given adult responsibilities. It is alarming when she is sent to collect dung to 'cure the meat,' but thankfully we see that the dung is used to stoke the fire which smokes the mutton hanging over it. Meanwhile Nansaa's dad gathers with other men to discuss the wolf situation. Many of their kind have been selling off their livestock and moving to the city, leaving stray dogs behind which mingle with the wolves. Father discusses this idea with mother, suggesting he could get a job in a department store, but she points out that they could not afford to live on this salary. When Nansaa comes home with Zochor, mother and siblings are delighted with the cheerful pup. Dad has realistic concerns which mother counters with fate. He prevails, but of course, she is eventually proven right. Davaa lets her seemingly simple tale unfold slowly, letting us observe the minutiae of daily life - getting water, making cheese or evaluating the new ladle dad has brought from town. The children in these films are delightful to watch, especially in the native dress which binds them in quilted jackets with hair tied up in colorful strings - all arms and pigtails sticking out. It is also absolutely fascinating to watch the breakdown of a yurt, the amazing circular tents that provide economical, colorful, compact and snug housing for these wandering people. Director of photography Daniel Schoenauer makes their whole world look beautiful. Unfortunately, in addition to the themes of reincarnation and bond between man and dog Davaa explores, she is showing us the erosion of a long held way of life. "The Cave of the Yellow Dog" is a celebration of a culture which may be dying and it is a wistful pleasure to indulge in it.