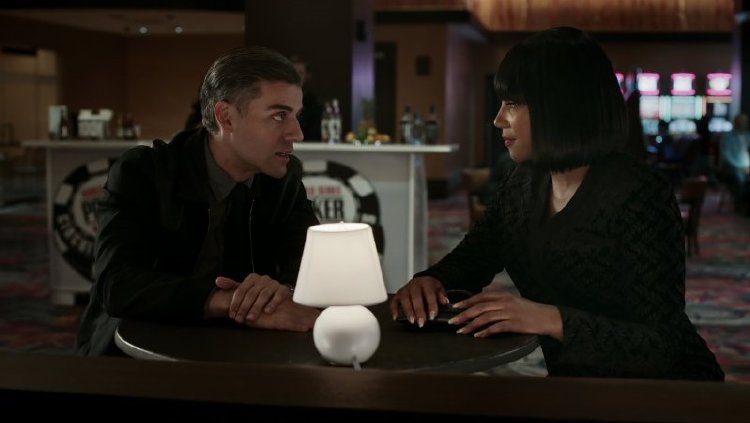 As he travels the low stakes poker circuit, William Tell (Oscar Isaac) frequently runs into the same characters, and, as he tells us, a player doesn’t play the house but the other players.  One day, though, attending a Global Security Conference because ‘cops get a few drinks in them and think you can’t touch them,’ a young man hands him a slip of paper and tells him to call him.  It appears Cirk (Tye Sheridan, "Mud") knows Tell’s real identity and they are connected, Cirk’s late dad having tortured Abu Ghraib prisoners along with Private First Class William Tillich under the direction of the man speaking at that conference, Major John Gordo (Willem Dafoe).  Alarmed by Cirk’s plans for retribution, Bill seeks his own redemption by yanking the young man onto a healthier path with the help of La Linda (Tiffany Haddish), who can get him into the high stakes arena that will fund it in “The Card Counter.”

The last we heard from writer/director Paul Schrader ("First Reformed"), he was addressing climate change.  His latest is an incendiary portrait of America where little guys like our tortured protagonist pay for crimes while their higher ups move on to lucrative business ventures.  “The Card Counter” is a “Taxi Driver” for our times.

Bill tells us he enjoyed prison life with its simple environment, set routines, constant card games and books.  We can see those years in his meticulous appearance, every hair in place, a boxy zippered black leather jacket worn over sharply pressed pants always paired with shirt and tie.  But his freedom exists in limbo, Bill preferring the anonymous existence of generic motel rooms which he not only strips of any décor, but swaddles everything in plain white sheets and the types of poker games where he doesn’t draw attention.

It’s at one of those games where he notes a woman wearing sunglasses and stilettos sitting on the sidelines and when she makes her way over to his table we learn they’ve played together a few times.  There’s a definite hint of attraction in the air, but Bill, who once considered himself a ladies’ man, doesn’t engage in those feelings anymore.  She’s interested in adding him to her stable of talented players backed by investors looking for big payoffs but Bill declines, telling her his goals are modest.  Once he hears Cirk’s plan to kidnap, torture and kill Gordo, though, La Linda (Haddish) is the first person he calls as a way to fund his redemptive plan and her warm, stabilizing influence creates a weirdly sweet family of sorts with Cirk a nudging matchmaker.  But as in “Taxi Driver,” the violent outsider trying to save an innocent from a corrupted political landscape will find himself having to descend into hell once more.

There are some fascinating contrasts at play here.  If Bill’s rooms are made a blank canvas, Cirk’s garbage and clothing strewn casino chaos reflects the psychological harm done by the abuses of a tortured father who beat his wife and child and drove her away before committing suicide (each greets the other’s lodgings with an astonished ‘This is how you live?’).  Bill’s white holding pattern is disrupted by nightmares of his complicity in Abu Ghraib, hellishly depicted by cinematographer Alexander Dynan using VR technology and described by Bill as a combination of unbearable noise and nauseating smells.  When Bill becomes hopeful for Cirk’s reconciliation with his mother and reentry into college, he allows La Linda to coax him out of the dark and dingy casino world for a walk through a lighted fantasy land, a park that sparkles like a Lite Brite, where he takes her hand.  America itself is represented by Mr. U.S.A., a braying Ukrainian player dressed in red, white and blue with his own Greek chorus chanting ‘U.S.A., U.S.A.”  He’s a goonish foreign puppet and it might not be a stretch to view La Linda as representative of the Black female voters who saved America from one.  Black Rebel Motorcycle Club's Robert Levon Been contributes a dark, percussive score as well as several songs on the soundtrack, including the accompaniment to the final, moving scene, ‘Mercy of Man.’

Schrader goes heavy on symbolism here and Dafoe and, to some extent, Sheridan’s characters are more plot point than people of real interest, but Isaac’s character study is quietly riveting and the astutely cast Haddish is a revelation, walking away with every scene she’s in.  “The Card Counter” may not be to all tastes, but those willing to take a deep dive will have plenty to chew on.

William Tell (Oscar Isaac) served in the Iraq War and, now, lives the life of a professional gambler working the casino circuit. Things change in his solitary life when he meets an angry young man, Cirk (Tye Sheridan), bent on revenge. He sees the chance to redeem himself, and Cirk, by helping the younger man - but his plan takes a back seat to vengeance in “The Card Counter.”

Tell (not his real name) lives a life of one night “stands,” moving from one casino and city to another, getting into high stakes poker tournaments and sticking to his modest goals. He has a daily ritual of moving into some non-descript motel and wrapping clean white sheets around everything in the room, removing paintings and creating a monk’s austere cloister. This behavior gives the viewer a glimpse into this man of mystery.

When he arrives at a casino where there is a law enforcement conference under way, the ex-soldier slips into a lecture on interrogation by a former army major named John Gordo (Willem Dafoe). A wash of recognition comes over Tell, but before he can react, a younger man, very intense, gives him a slip of paper and says, “Call me!”

This meeting leads us to the heart of the story. For his reasons, Cirk wants Major Gordo dead – if you want to know more, see the movie – and Tell makes it his mission to stop the younger man’s plans for revenge. He invites the un-tethered Cirk to join him on the casino circuit, all expenses paid, with hope of changing his mind.

Adding to the story is the professional meet between William and La Linda (Tiffany Haddish), a woman who runs a stable of gamblers for wealthy financiers. In his desire to save Cirk, he agrees to join up with La Linda for a 50-50 split of all winnings in the World Series of poker.

“The Card Counter” is the first-rate character study of a man who has tried to put his violent past – shown with gripping and surreal visual intensity by cinematographer Alexander Dynan – behind him and forgotten. But, the torment and guilt he suffers is not laid bare all at once but is shown in small bits as we see what William really is just beneath the surface. Oscar Isaac gives a terrific performance as the story of redemption plays out and, though William talks little, his intensity speaks volumes about the man.

Tye Sheridan, as Cirk, is more a symbol to the story than a character, but that suits the flow of the film. Tiffany Haddish develops La Linda into a three-dimensional person as she tries to help Tell cope with his demons and brings light into an otherwise dark life. The comedian-turned-dramatic-actor does it very well.

Paul Schrader writes and directs this study of PTSD, guilt and redemption and the toll it takes on its victims, personified here by the tightly wound William. With concentration on our military’s return from Afghanistan, Schrader and company shed a harsh light on what our coming home troops may individually face and what we must do to help them.