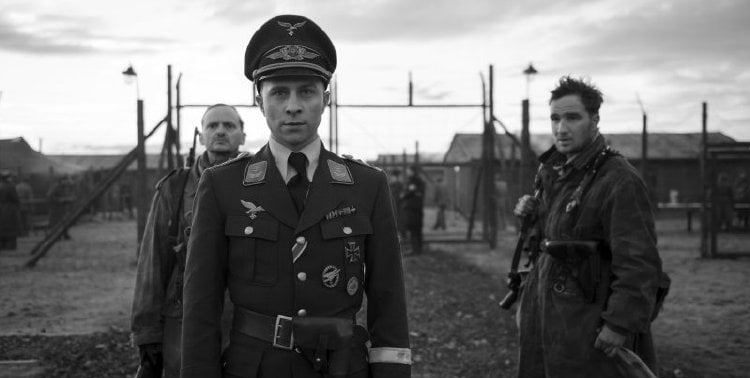 The end of the war draws near and a young German soldier flees for his life from Nazi executioners searching for deserters. He hides from his pursuers and eventually escapes, wandering aimlessly, He comes upon an abandoned staff car and in it is the uniform of a Luftwaffe captain. He dons the garment and, with it, comes a sense of power. He finds that soldiers will follow him and his orders and Private Willi Herold (Max Hubacher) will become the Executioner of Emsland as “The Captain.”

In April, 1945 with WWII in its final weeks, German soldiers separated from their units wandered the countryside. Eighteen year-old Willi Herold (Max Hubacher) was one of them, but he became notorious as the Executioner of Emsland, a camp for Wehrmacht deserters, when he found a Nazi Luftwaffe uniform in an abandoned vehicle and began impersonating "The Captain." Writer/director Robert Schwentke's early German films were never distributed in the U.S. and he's has had an uneven career in Hollywood from the lows of "R.I.P.D" to the relative highs of "Flightplan" and "RED." For the first time in fifteen years, he's returned to his home country to tell a true story of its past with profound resonance in today's political climate, the tale of an ordinary person so corrupted by Fascist authority it led to his killing almost 200 people. It is his best film by far to be released in this country. The filmmaker gives us a canny introduction to his protagonist, one which gets the audience on his side. A terrified Herold runs through snowy fields followed by Nazis in a military vehicle hunting him down. Emerging from his hiding place, he finds the uniform that will change his fate, cinematographer Florian Ballhaus framing this version of Herold in a rear view mirror. Within minutes, an older, ragged soldier, Freytag (Milan Peschel), approaches and asks to join Herold's command. Herold's response is shocking, the young man immediately taking on entitled, authoritarian airs, demanding Freytag's papers, before tossing him an apple and allowing him to push the abandoned vehicle out of its muddy ditch. Herald will continue to build 'Task Force Herold,' eventually turning up at Emsland's Camp II where Captain Junker (Alexander Fehling, "Inglourious Basterds"), the very man who was chasing Herold the foot soldier, is informed that Herold is on a mission assigned directly by Hitler. Clearly struggling to remember where he's seen his face, Junker nonetheless believes him, Herold aligning himself with Junker and Schütte (Bernd Hölscher) against Hansen (Waldemar Kobus, "Valkyrie"), the man responsible for the prisoners who is determined to follow lawful procedure. Herold sets himself up as judge and executioner, ordering a pit to be dug, then forcing prisoners to climb in where they are mowed down with an anti-aircraft gun. The scene is horrific, even shot in black and white (as all of the film is, save one shot in color of the field where Camp II once stood). Some of Herold's men break down. Why has he done this? What began as an attempt to cover his tracks has evolved into inexplicable evil, aided by men like Kipinski (Frederick Lau, "Victoria"). It is only when Herold is reprimanded for committing atrocities that we see any change in him, Hubacher shrinking into his uniform like a little kid playing dress up, but it is fear, not remorse, as evinced by the celebration he later throws. After Camp II is leveled by an Allied air strike, Herold and what is left of his men continue on, riding in a military vehicle, 'Express Court Herold' sloppily painted on its side. They descend into a debauched depravity, a madness all its own within a larger one. Freytag, once depicted as his own little island apart, is now part and parcel of Herold's insanity. Martin Todsharow's minimalist score uses single instruments, a jazz sax here, thrumming bass there, adding sonic unease to Schwentke's tale. The director and his star may not explain just what led this kid to commit such horrific crimes other than the corrupting influence of power, but they've succeeded in illustrating just how effortless it can be given opportunity and the right environment. Grade:

Being an amateur WWII historian, I know a lot of strange stories of the bizarre things that happen in war. But, I have to admit, this reportedly true-life story is one I cannot remember having heard before. But, if true, writer-director Robert Schwentke does some copious homework to uncover a very weird tale about absolute power corrupting absolutely or, maybe, a story of survival. (I vote the former.) As soon as 19-year old deserter Herold puts on the Hauptman’s uniform, he feels its authority and uses it to gather a band of stragglers who were “separated from their units”. He tells them he is under direct orders of the Fuehrer and they begin a campaign to execute other deserters from the army. German-born writer-director Robert Schwentke is best known for his American/Hollywood works like “Flightplan (2005),” “RED (2010),” “R.I.P.D. (2013)” and the “Insurgent” franchise. So, it was a surprise, to me, for the auteur to return home and recreate one of the more bizarre and heinous incidents in a war full of heinous acts. The story of Willi Herold, whether fact or fiction, is a fascinating character study – absolute power or survival? – of a desperate young man among desperate young men who are the pawns of war. Willi, in his commandeering the life, with all of its perks, of the unknown captain, is at a crossroads just as Germany collapses. His choice is not one that I would make, at least I hope not. Schwentke’s use of black and white fits the monochromatic world of grey uniforms and brown mud where life is but a whim for those, genuine or not, in command. “The Captain” is a very dark page in a history that is rife with horror and inhumanity.