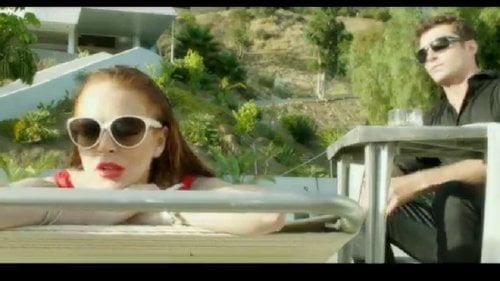 At an L.A. restaurant, young actor Ryan (Nolan Funk, "Deadgirl," " House at the End of the Street") is uncomfortable meeting the producer of the low budget slasher film that will be his big break. Christian (porn star James Deen) spills too much information about his extracurricular sexual activities with and without his girlfriend Tara (Lindsay Lohan), who recommended Ryan for the role as a favor to her girlfriend Gina (Amanda Brooks, "Flightplan") who lives with Ryan and works for Christian. Unbeknownst to Christian and Gina, Tara and Ryan lived together for a year and recently began seeing each other secretly but Ryan's both worried and disgusted about what goes on at Christian's home in "The Canyons."

This highly ballyhooed, self-and-kickstarter-financed, low-budget film from director Paul Schrader ("Hardcore," "Affliction") and screenWriter Bret Easton Ellis ("The Informers") certainly bears the imprint of its makers. The Christian character shares more than a little DNA with Ellis's 'American Psycho' Patrick Bateman and Tara and Ryan could be a composite of Schrader's "American Gigolo." But clearly the filmmakers are trying to say something about Hollywood (the movie opens with a montage of abandoned suburban cinemas) with their emphasis on Smartphones, trust fund producers and a minimum wage workforce fed by wannabe film stars. The combination of power, sex and betrayal that fuels the plot have been around since cinema's beginnings and the 'sex tape' for decades, so have they really said anything about technological and economic shifts in filmmaking? It all comes down to one statement from Tara about the last time a movie mattered enough to drive one to the big screen. It's ironic that John DeFazio's HD images are one of the film's highlights and yet journalists have been invited to screen the film online, Tara clearly is not only embarrassed by Christian's swinging stories, she's not happy with the lifestyle either, yet that very night he calls in another guy he's found on the Internet ('What's with all the guys lately?' she asks and he tells her she's beautiful and he enjoys another man seeing what he cannot have). She complies and the scene's given an unsettling boost by Brendan Canning's music, which sounds like something playing in Buffalo Bill's basement. The next day brings all kinds of revelations. Tara meets Ryan and we learn about their past. He's still in love with her but she wants financial security, to be 'taken care of, sick of going on auditions for jobs she never got, bartending for $8/hour. Meanwhile Christian's seeing former actress/yoga instructor Cynthia (Tenille Houston) who throws him out after a quick tumble after he starts going on about Tara. Then Tara meets Gina for lunch and gets a load of rubbish about Ryan's take on Christian. Guess who Gina calls the moment Tara leaves? Christian not only demands to know where Tara is every minute of the day, he's checking up on her as well. When he confirms his suspicions, he arranges a casting couch demand on Ryan using his gay f/x guy Jon (Jim Boeven). Ryan, knowing what's up, retaliates with Cynthia's help and Easton Ellis wraps with obvious irony. Schrader's has nothing but praise for Lohan despite the problems she caused, comparing her to Marilyn Monroe, but while she's fine in the role, the comparison is mind-boggling. Lohan's required to do little more than be constantly anxious and disrobe. Deen acquits shallow assholery well, but Funk has more of an arc to navigate. Brooks and Boeven are the only actors allowed some semblance of sympathetic humanity. Filmmaker Gus Van Sant also appears as Christian's shrink, Dr. Campbell. "The Canyons" is watchable trash, an old school pot-boiler delivered with new technology, its problematic production and festival rejections savvily spun.