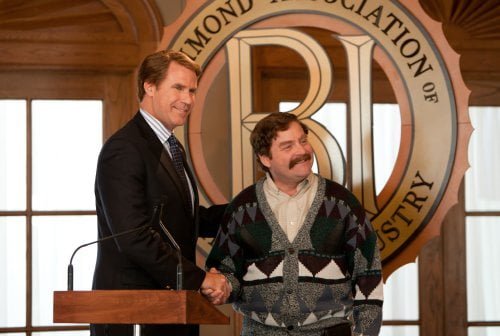 Cam Brady (Will Ferrell) is entering his fifth unopposed run for his Congressional seat. But, the stinking rich Motch brothers (John Lithgow and Dan Ackroyd) want to control the district for nefarious reasons and talk the director of the local Tourism Center, Marty Huggins (Zach Galifianakis), into running against Cam in “The Campaign.”

'War has rules, mud wrestling has rules. Politics has no rules.' Ross Perot The congressional race for a North Carolina's Hammond County district is no contest because incumbent Cam Brady (Will Ferrell) is running unopposed. Until, that is, he steps in it big time, infuriating bit league bankrollers Glenn (John Lithgow) and Wade Motch (Dan Aykroyd). They approach old political colleague Raymond Huggins (Brian Cox, "RED," "Rise of the Planet of the Apes") with a proposal - to set up his unlikely son Marty (Zach Galifianakis) as their puppet candidate for "The Campaign." Comedy director Jay Roach ("Meet the Fockers") has been exercising his interest in politics on HBO dramas with both 'Recount' and the recent 'Game Change.' With "The Campaign," written by Shawn Harwell (HBO's 'Eastbound and Down') and Chris Henchy ("The Other Guys"), the two are merged in a timely look at the circus political campaigns have become. It could have and should have been sharper, too often going for the base humor that passes for comedy these days, but while the movie doesn't get into any issues, it does deliver a few direct hits on back room shenanigans. The film begins with one of those - a montage of Brady campaign appearances designed to sway every last demographic (Filipino tilt-o-whirl operators!) and dripping with insincerity. Brady is the product of a political dynasty, an entitled hedonist and manufactured image that includes an equally insincere ambitious blond wife Rose (Katherine LaNasa, HBO's 'Big Love') and tween son (Randall Cunningham as Cam Jr.). He fails to understand how a scandalous phone message will hurt him and is flabbergasted when his old classmate Marty, a sweater-vested, pug-owning, effeminate goody two-shoes who runs the local chamber of commerce, throws his hat in the ring. Marty begins in earnest, asking his wife Mitzi (Sarah Baker, "Sweet Home Alabama") and sons Clay (Grant Goodman, "Super") and Dylan (Kya Haywood) if they have anything to come clean about with predictably vulgar but benign results. His eyes are opened at a 'civility breakfast' where Cam takes the opportunity to humiliate him with a slide show. The Mochts send in Tim Wattley (Dylan McDermott, TV's 'American Horror Story'), clad in black from head to toe, to manage Marty and he, his family, his home and even his pets get a makeover. Soon Marty's attempting to trash talk as Cam's team churns out political ads suggesting he's a terrorist. It is both funny and appalling how close some of these jokes skirt the truth. The film's funniest gags involving an intentional wardrobe malfunction and a hunting accident are also ripped from the headlines. Ferrell's doing his usual schtick and the clueless pol hangs well on him. Galifianakis, too, does a variation on his "Due Date" and "Hangover" oddballs, but even so, the tall, fit Ferrell and short, hirsute Galifianakis work well together. McDermott verges on demonic and Cox is fun as an old boy southerner who insists his Asian help Mrs. Yao (Karen Maruyama, "The Bucket List") talk like a nanny from "Gone with the Wind." Baker is funny and sympathetic as the woman who proposed to Marty only to end up getting sexual gratification via her own hands to Drew Carey hosting 'The Price Is Right.' Lithgow and Aykroyd cannot help but recall Ralph Bellamy and Don Ameche's Randolph and Mortimer Duke from Aykroyd's "Trading Places." The only real political issue which comes into play is the Motch brothers' final agenda, one which sounds more Romney than Obama in nature and one which causes a final political rift and a most unexpected political partnership. Ultimately, "The Campaign" has the idealism of "Mr. Smith Goes to Washington" at heart but is too often led around by its crotch. C+ The Blu-ray/DV

We can count on director Jay Roach and star Ferrell to come up with a funny movie and they hit their target with “The Campaign.” The story (by Chris Henchy and Shawn Harwell) is by the numbers as it follows Cam through his indiscretions (and there are many) as he blithely causes one scandal after another knowing that he is assured reelection. That is, until the Motchs groom Marty to take over the Congressional seat and the battle line is drawn. Where “The Campaign” is at its best and funniest are the slapstick moments where Cam and Marty compete for the voters’ attention. I will not spoil those moments by telling about them. The film is more fun if you go in cold and let the many gags wash over you. The story uses these funny moments to entertain while “The Campaign’s” campaign unfolds. The device of the Motch brothers’ machinations in manipulating the election sounds, strongly, like the Duke brothers in “Trading Places” manipulating the stock market. Will Ferrell does nothing new here but does it with his usual bluster and braggadocio. Zach Galifianakis plays Marty Huggins in a way that he kept reminding me of Jack Black in this year’s “Bernie.” The supporting cast is fine but Dylan McDermott stands out as the gun-for-hire puppet-master campaign manager, Tim Wattley. “The Campaign” works best when director Jay Roach does the thing that he does best – slapstick shock humor and visual gags. I give it B-. The Blu-ray/DVD Combo Pack: Timed to take advantage of the presidential election brouhaha, Warner Bros. Home Video is releasing the Will Ferrell-Zach Galifianakis political comedy “The Campaign” on a combo Blu-ray/DVD set. The video extras on the Blu-ray disc include an extended version of the film – of which I could tell little that was added or changed – an extended feature reel that shows the comedians doing their improvisation shtick, a deleted scenes reel and a gag reel. Of these extras, the gag reel is the most superfluous with scenes of one or another actor muffing their lines in laughter and not much more. The deleted scenes are interesting and, if included in the original theatrical release, would have made for a very different movie. A narrated version of the film, with director Jay Roach and his stars Ferrell and Galifianakis, is an obvious omission from the disc set.