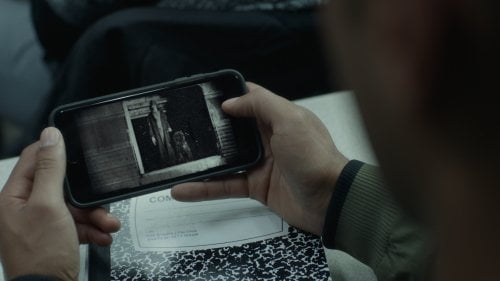 Things are looking great for Elliot (Douglas Smith, HBO's 'Big Love,' "Ouija"), his girlfriend Sasha (Cressida Bonas) and their girl magnet friend John (Lucien Laviscount) as they move into their first house together while attending college. But soon they discover the remnants of something insidious there, an evil entity that feeds upon one's knowledge of its existence. But the more they try to banish him from their brains, the more they begin to obsess, leaving the trio vulnerable to "The Bye Bye Man."

Adapted from Damon Schneck's 'The Bridge to Body Island' by Jonathan Penner, "The Bye Bye Man" is like "A Nightmare on Elm Street" for the waking crossed with the Bloody Mary urban legend and "It Follows'" contagion concept. If only it were as good as any of those reference points. This isn't a cliched horror movie where characters act stupidly, but illogically, the writing so sloppy that pivotal silver dollars are continually referred to as 'gold coins' (maybe the production couldn't afford the real thing?). It's too bad, really, because, without the exception of a CGI demon dog, director Stacy Title proves capable of creating spooky atmosphere and some intriguing shots (director of photography James Kniest, "Annabelle," "Hush"). The film begins effectively, in bright sunshine, as it recounts events from 1969. Larry (Leigh Whannell, "Saw," "Insidious"), who mutters 'Don't think it, don't say it' over and over, has covered his living room with the warning. He loads a rifle, asking a woman from across the street 'Did you tell anyone else the name?' After killing all who know it, he turns the gun on himself. In the present, the three friends explore their new home. Sasha finds it a bit creepy, but the general consensus is favorable. In the new, expansive bedroom he shares with Sasha, Elliot hears a noise and finds a silver dollar on the floor beneath a nightstand. He opens the drawer and throws it in, only to have it fall to the floor again. Inspecting the drawer, he finds it lined with a spiral of Larry's repeated warning. Peeling that away, he finds 'The Bye Bye Man' deeply etched onto the bottom. The three friends throw a huge party to celebrate their new digs. Elliot's older brother Virgil (Michael Trucco, TV's'Battlestar Galactica') notes that it's a good thing he isn't jealous as Sasha dances suggestively with John, but Elliot sees nothing there. Virgil's young daughter Alice (Jacob's little sister, Erica Tremblay) wanders upstairs and opens a small closet door in her uncle's bedroom. The head of a large dog emerges from another door behind her, but she heads back downstairs none the wiser. Meanwhile John has expressed interest in Sasha's friend Kim (Jenna Kanell). Turns out Kim is sensitive to psychic phenomena and Sasha has asked her to clean the house's aura by burning sage. Elliot and John are skeptical, so Kim proves her ability by revealing that Elliot's parents were killed in an accident and that she understands John's intentions. But then she picks up on something else which alarms her. The four have now all heard about The Bye Bye Man and soon they are seeing and hearing things that are not there and not seeing things that are. A cloak with a peaked hood (which has no logical reason for being there) in Elliot and Sasha's room comes to life at night. Elliot tries to research The Bye Bye Man at the school library but comes up blank except for an archived dead file which leads him to Larry, who was writing an article about a teen who killed his entire family back in 1969. Now librarian Mrs. Watkins (Cleo King, "The Hangover," TV's 'Mike & Molly') has heard the name. As those in 'the know' begin to be reaped, things get progressively silly. At a crime scene, Detective Shaw (Carrie-Anne Moss, "The Matrix") becomes suspicious of Elliot, but takes his guarded explanation at face value, letting him go. Elliot traces prior ownership of the nightstand to Larry's widow (Faye Dunaway!!!) who gives him an expanded version of the film's opener, irretrievably compromising it. The film ends with teases of The Bye Bye Man's potential spread (oh joy, sequels!), Virgil's final statement inviting laughter. There are worse horror films out there to be sure, but "The Bye Bye Man" begins with promise only to offer continually disintegrating returns. Grade: