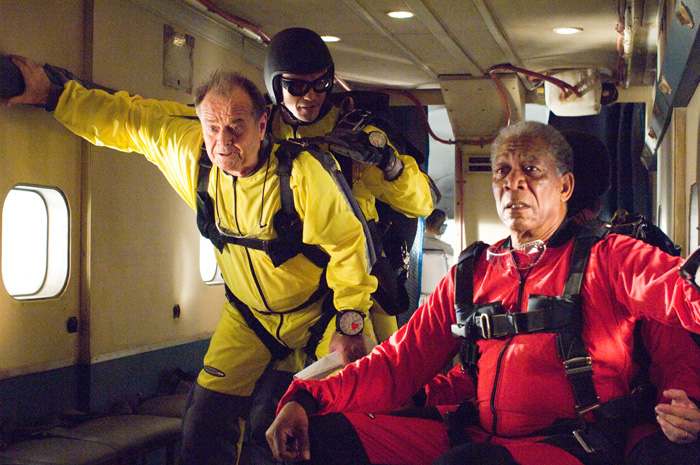 Two men from very different walks of life are thrown together as cancer patient roommates in a hospital. Edward Cole (Jack Nicholson) is a self-made billionaire and owner of the corporation that owns the hospital. Carter Chambers (Morgan Freeman) is an automobile mechanic who has struggled all of his life to make ends meet. Now, though, they have their illness in common and just 6-months to a year to live. When Carter starts writing down things he would like to do in his waning days, Edward decides to make the wish list a reality in “The Bucket List.”

Carter dredges up, from his distant youth, the idea to create a list of things to do before you kick the bucket. On it, he writes down such things as “do a kindness for others” and “behold a thing of beauty.” Filthy rich Edward, who has grown extremely fond of his roomie, adds such tangibles as “drive a race car” and “jump out of an airplane.” Cole makes an offer to Carter – give up or live. Much to Carter’s wife’s (Beverly Todd) chagrin, he takes the offer and the odd couple proceeds to live their dreams and tick off list items before the Grim Reaper takes them to meet their maker. Despite the star power of Nicholson and Freeman, I had the feeling that “The Bucket List” would be a sentimental weeper that would give its top liners the chance to travel the world on the studio’s nickel. Instead, it is a sure handed work by Rob Reiner (from the Justin Zackham script) that is, of course, sentimental (what do you expect), but with humor and edge. It helps to have two of America’s most assured and capable actors lending the routine story credence. It is world tour time as Edward and Carter begin their quest by skydiving and driving the aforementioned racecars. But the action starts taking on all manner of exotic locales from the Pyramids of Egypt to the Great Wall of China to the Taj Mahal and Hong Kong, making this a true travelogue. The strength of the film’s stars helps give depth to the many beautiful locations. It says a lot for a movie when I actually got all choked up near the end of “The Bucket List.” It is the actors, though, and not the routine script that elevates the film to adult level fare that, yes, tugs at the old heartstrings. You “like” Carter and Edward, for all their quirks and, especially Cole, irascibilities and the two actors have a wonderful chemistry that, for all of its rags and riches differences between the men, rings believable. Techs are fully a part of the heartening spirit of the film with John Schwartzman doing excellent work lensing the many and varied locales and their magnificent treasures. Music, by Marc Shaiman, borders on overly schmaltzy but manages to keep the positive mood of “The Bucket List.” I t is nice to be pleasantly surprised when you see a film that exceeds your expectations. “The Bucket List” is such a movie and it will find a big following with mature audiences everywhere. This is a good thing.