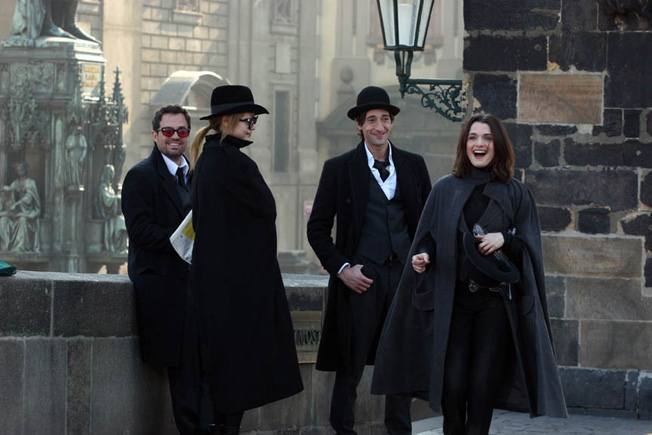 Bloom (Adrien Brody) and Stephen (Mark Ruffalo) have been con artists since they were kids and have made a career out of their elaborate deceptions. Bloom, though, has tired of his life of trickery and wants out of the business. Stephen convinces him to make one more con: to dupe over a million dollars from pretty, eccentric heiress Penelope Stamp (Rachel Weisz). Things do not go way they expect, though, in “The Brothers Bloom.”

Sophomore writer-director Rian Johnson makes a huge leap, in both budget and scope of production, over his clever debut flick, “Brick.” The result is a globe-hopping con tale that travels from Montenegro to New Jersey, Prague, Mexico and St. Petersburg. If you are looking for a frenetically paced dramedy that is big on looks and light on substance, then “The Brothers Bloom” may be your cup of tea. It was not mine. The Bloom brothers’ characters establish themselves at the start of the film as fedora-wearing youngsters who have a knack for pulling off scams. Jump ahead a couple of decades and Bloom (first name never given. Is his real name, Bloom Bloom? One of the many unresolved mysteries that permeate this filmmaker’s lark) is world-weary and tired of his deceitful life while Stephen is always eager to jump into the next swindle. Stephen convinces his brother to make one last con and targets Penelope, rich and lonely, for the million dollar-plus fraud. Penelope has so much money that she has spent her secluded life just buying and doing “stuff.” However, money cannot buy everything and she jumps at the chance to join Bloom and Stephen on an adventure to buy a rare, illicit medieval manuscript. It is just the adventure that Penelope is looking for and the takings should be easy for the con artist brothers. However, Bloom falls for the pretty, rich woman and the story gets both confused and confusing. The exuberant script by Johnson gets sloppy in both execution and storytelling. The reason to be for “The Brothers Bloom” is to allow the filmmaker, his cast and crew to have fun in a series of exotic locations. It has to be that since the awkward story does not give the talented cast a place to hang their character hats. Adrien Brody is vapid as the conflicted Bloom. The actor never achieves three-dimensions with his always brooding, never fun performance. Mark Ruffalo, on the other hand, envelopes the adventurous, thrill-seeking Stephen and gives him a likable persona. Rachel Weisz is wasted as the lovable, reclusive heiress. The actress deserved more than her two-dimensional Penelope but Weisz makes the most of it. Robbie Coltrane plays the mysterious Curator who seems to be part of the con but, then again, may not. Maximilian Schell, as the strange Diamond Dog, may have been the Blooms’ mentor, abuser or muse, though this is one of the film’s many unresolved mysteries. The one other pleasure is the character Bang Bang (Rinko Kikuchi), the silent partner with the brothers Bloom who has a penchant for funky, out there wardrobe and blowing things up. Techs are as expected for a globetrotting adventure yarn. It is too bad that the script was not up to the behind-the-camera work.