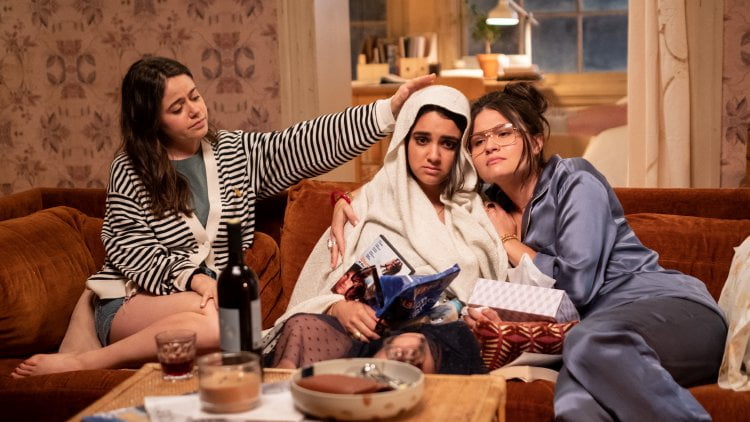 Lucy Gulliver (Geraldine Viswanathan, "Blockers") has kept at least one memento from every broken relationship since she kept her high school boyfriend’s retainer but lately things have been looking up.  Thrilled to death to be working at the legendary Eva Woolf’s (Bernadette Peters) art gallery, she’s also swooning over her new romance with coworker Max Vora (Utkarsh Ambudkar, "Brittany Runs a Marathon").  While it turns out to be short lived, the man she meets on the lowest night of her life, Nick (Dacre Montgomery, Netflix's 'Stranger Things'), inspires her to create “The Broken Hearts Gallery.”

I really had high hopes for this female driven rom com, the feature theatrical debut of writer/director Natalie Krinsky (writer, TV's 'Gossip Girl') providing a starring role for “Blockers” breakout Viswanathan.  It has some cute ideas, including its conceptual hook, but for the most part it is another formulaic outing with problematic performances from both of its leads.  Thankfully supporting players help buoy the material with snappy, flavorful work.

Of course Lucy falls into Nick’s car thinking he’s her Uber driver Adolfo, babbling over his explanations until he takes pity and decides to drive her home.  ‘Max broke up with me and I got fired!’ she wails to her two roommates, Amanda (Molly Gordon, "Good Boys") and Nadine (Phillipa Soo, "Hamilton"), who, in a sped up montage, surround her with the breakup essentials of blankets, wine, chocolate, Kleenex and hugs.  So far, so sweet.

When Lucy next runs into Nick she learns he’s been single handedly trying to rejuvenate a NYC space into a boutique hotel and, inspired by a slab of wall leaning in the lobby, tacks up Max’s tie.  A light bulb goes off and she labels it The Broken Hearts Gallery.  Overnight, someone adds something.  She promotes it on social media and becomes an underground sensation.  Suddenly Max is interested again.

Funnily enough, I’d just revisited (the highly recommended) “Crossing Delancy” the day before viewing this and it was informative watching this movie follow that earlier film’s beats to much differing results.  That film was drenched in NYC authenticity, from its Upper East Side intellectuals to its Delancy Street pickle makers.  This one features some witty dialogue, but little of it feels natural.   Viswanathan, so engaging in a supporting role, plays to the rafters here, her performance dialed up so high it becomes wearying.  It’s like watching a street performer trying to maintain the attention of a passing crowd.  Montgomery, who made me think of Beau Bridges to his brother Jeff if Jeff were Zac Efron, grows into Nick by the point of his ‘grand gesture,’ but there are winks of condescension, almost contempt, for the role as he finds his feet.

We can really enjoy those who support these two however, Gordon riffing off her silent-until-he-isn’t, headphoned mate Jeff (Nathan Dales) while Soo whips off zingers.  Arturo Castro (TV's 'Alternatino with Arturo Castro') steals every scene he’s in as Nick’s buddy Marcos.  Bernadette Peters is bookended in screenwriting 101 scenes, but she gives them such much needed finesse.  Canadian character actress Sheila McCarthy appears in an underwritten role which, frankly, should have been excised, no fault of hers.

Krinsky makes some punchy plays, Amanda’s ‘murder karaoke’ birthday party a fun backdrop, Lucy’s taped interviews of those donating to her gallery a winning device.  “The Broken Hearts Gallery” isn’t a bad film, just a wildly uneven one that wears out its welcome at 110 minutes.

Lucy (Geraldine Viswanathan) came to New York City, fresh out of school, planning to take over the town and run her own chic art gallery. Eight years later, she is a lowly assistant and her accomplishment is a string of break ups leaving only mementos for “The Broken Hearts Gallery.”

First time feature writer-director Natalie Krinsky brings us a work that I can only describe as a teenage girl’s fantasy tale – that is, if the teenage girl suffers from an untreated bipolar disorder.

Lucy is a bundle of enthusiasm, insecurity, free-flowing ideas and an emotional hoarder, keeping a remembrance from all the guys that dumped her. Her roomies and BFFs, Amanda (Molly Gordon) and Nadine (Phillipa Soo), have supported her through all of it – and tried to get her to shed her fast accumulating collection of break-up junk, to no avail.

After another devastating dumping by her latest, Max (Utkarsh Ambudkar), Lucy calls for a Lyft ride and jumps in the first car that stops. It is not her Uber driver, Armando, but some guy, Nick (Dacre Montgomery), who takes pity on the teary eyed women and drives her home. And that appears to be that for these two ships passing in the night. But, not so fast!

Of course, in this fantasy yarn, Lucy and Nick cross paths again and we learn that he is in the process of converting an abandoned Y into a charming boutique hotel – the Chloe. Gallery-savvy Lucy sees the space’s potential and makes a deal with the hotelier. She will trade her labor for a spot for her new idea: The Broken Hearts Gallery, a place where the lovelorn can contribute an item from a past break-up and donate some cash.

As expected, at least by me, the collection, when Lucy puts it on the net, goes viral and more items and more bucks come rolling in and Lucy’s dream seems a done deal. Unfortunately, Nick and his business partner and best friend Marco (Arturo Castro) are out of money and their whole project is on the brink of collapse. But, as I said, this is a teenage girl’s fantasy and you know that things are going to be, both in business and romance, fine.

There is a lot more to the story but, at about the halfway mark, after I figured out where the plot was heading, I lost interest. A big part of that is due to the ponderous, for a light-hearted rom-com, run time of nearly two hours. Some serious editing and pacing would have been a big help but I never took to the two leads. It is telling when the BFFs are the thing to watch. Otherwise, I have been here before, many times.