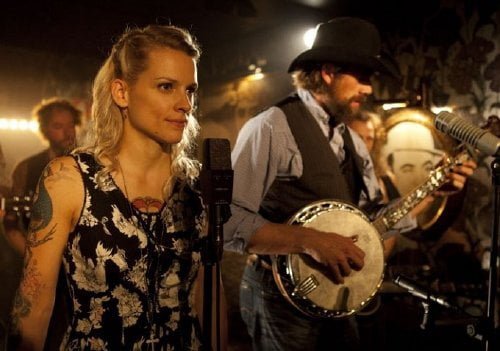 When tattoo artist Elise Vandevelde (Veerle Baetens) attends a bluegrass concert at the invitation of a stranger, she's surprised to see him leading the band in 'Will the Circle Be Unbroken.' She's delighted by the music and once she's locked eyes with Didier Bontinck (Johan Heldenbergh, "Moscow, Belgium"), they can't take them off each other. But when a beloved child is added to their mix, their differing philosophies carry more weight, leading to "The Broken Circle Breakdown."

This amazing Foreign Language submission from Belgium plays like "Once" with more passion, tragedy and invention. Adapted from the play 'The Broken Circle Breakdown Featuring the Cover-Ups of Alabama' by cowriter (with Carl Joos, "The Memory of a Killer")/director Felix Van Groeningen, the story is told both backwards and forwards, yet is never confusing to follow, instead offering more and more meaning to scenes we've seen before. The musical element - Elise becomes a singer with the band - is glorious, the songs commenting upon events in the couple's life, beautifully performed. The film doesn't begin at the beginning, but slightly thereafter, as Elise arrives at Didier's caravan adorned in a stars and stripes bikini which shows off her body art (including a ribbon which literally 'wraps' her derriere like a gift). Afterwards, she tells her romantic history via the tattoos whose accompanying names have since been inked over. Their lovemaking leads into the future, where we learn their daughter Maybelle (Nell Cattrysse) suffers from cancer. 'Close your eyes and think of something nice,' says Elise as Groeningen cuts to a foal running in Didier's field years earlier, an example of the film's flowing, time-shifting editing. Elise sings with the band (the colorful band members are played by Geert Van Rampelberg, Nils De Caster, Robbie Cleiren, Bert Huysentruyt and Jan Bijvoet as a unified character) and Didier's starstruck, the other musicians' appreciation shining from their eyes. Then Elise tells Didier she's pregnant and he reacts badly. Apologies come when he returns with his mates, construction materials in tow and the house which will evolve into a beautiful home is begun. This initial conflict is a seed planted, however, and although Groeningen follows with a montage of joyous times (Maybelle walks her first steps as 9/11 plays out on a background TV, 2003 is greeted with fireworks), there are warning signs. Maybelle is painted like a tiger and when asked 'What tigers do,' she growls and paws, the edit away so abrupt it leaves a chill. Elise presents Didier with 'his' tattoo and it's a revolver pointed at her crotch (his penis?). After a raucous 'Mega Minday' party for Maybelle's 6th birthday (the contrast in her musical taste is noted on Didier's pained face), the little girl's first warning signs of a looming health crisis are misinterpreted by her mother. Everything about this circle, Elise's religious leanings versus Didier's atheism, are conveyed with recurring symbols. Horses, birds, stars and the stars and stripes are woven throughout, touchstones of love, life, death and cultural betrayal. Even Elise's body is used to tell this story, and it's a devastating one. When Groeningen chooses a late moment in his film to return to an earlier duet, it's crushing to see how two people who were so intoxicated with each other have arrived at so much heartbreak. Mother's Day becomes a dagger, an American President a focal rage point. But is the circle really broken? The filmmakers find an answer with Didier's eloquent, science-based spin on everlasting life.

I am not, by any stretch of the imagination, a fan of Steve Bannon. I personally find his politics reprehensible and, to me, he looks like a diseased rag bag. But, I love documentaries and “The Brink” is a good example of the genre: you are entertained and learn stuff, whether you like the subject or not. Director Allison Klayman follows Bannon after his resignation/firing (depending on whom you talk to) from the White House through the 2018 midterm elections and his European tour promoting his Far Right world political agenda. The film shows the man’s dedication to espousing his agenda to the right wing leaders from France, Italy and Belgium to the UK, Poland and Hungary. Klayman’s access to Bannon, with ample chances to voice his radical right wing creed on camera, allows him to pontificate on whatever comes to his mind. For a leftist liberal like me, his rhetoric of hate and supremacy sets my hair on fire and I lost the surface layer of my teeth by grinding them throughout “The Brink.” Even though I do not like the man, I appreciate the chance to see, in a succinctly crafted way, the many reasons why.