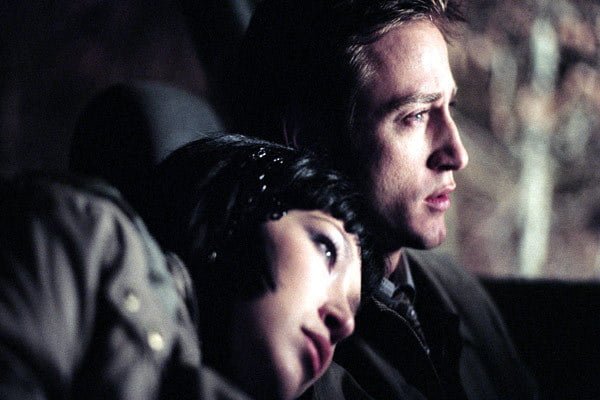 Philippe Tardieu (Benoît Magimel, "The Piano Player," "The Flower of Evil") is at the onset of a solid career in kitchen remodeling while still living at home trying to keep the women in his life, mother Christine (Aurore Clément, "Bon voyage") and sisters Sophie (Solène Bouton) and Patricia (Anna Mihalcea), out of trouble. But it is at his sister Sophie's wedding where he himself doesn't recognize the extremity of problem that will be brought upon him by his attraction to "The Bridesmaid."

One of director Claude Chabrol's very best films is 1995's "La Cérémonie," adapted from a Ruth Rendell novel and so now he and cowriter Pierre Leccia have adapted another, perhaps beginning the type of artistic partnership that Hitchcock enjoyed with Patricia Highsmith. But while "The Bridesmaid" certainly has its moments, most notably in Chabrol's masterful sleight of hand misdirection with his early, family scenes, it is a movie that would have had greater impact in the 60's or maybe 70's. This is the type of gothic horror that has become so familiar over time, that its shocks make one feel more nostalgic than horrified. The film begins with one of Chabrol's typical middle class families where all seems right on the surface. Big brother Philippe is upset with his sisters' morbid interest in a local missing person's case (one of their female classmates) and his mother's insistence of giving Flora, the faux antique female head that has long adorned their garden, to Gerard (Bernard Le Coq, "The Flower of Evil," "Caché"), her suspect boyfriend. Indeed, Gerard's behavior after meeting Christine's family (on an evening he clearly planned to spend with her alone) is less than chivalrous. Meanwhile little sister Patricia is staying out too late and getting into trouble and Sophie is marrying someone who seems beneath her. Everyone, it appears, wants out, except for Philippe himself. Then comes Sophie's rain soaked wedding day and Philippe catches the eye of strange beauty Stéphanie "Senta" Bellange (Laura Smet, "Gilles' Wife"), who follows him home and declares them soul mates in short order. She tells strange stories that he doesn't believe, yet as he's out and about on business smoothing the complaints of widowed customers Madames Bertillon (Jacqueline Cassard) and Crespin (Suzanne Flon, "The Flower of Evil"), facts which prove her right filter in during the day. His passion for her is really tested when she tells him of the four things one must to do to really live - plant a tree, write a poem, make love to someone of the same sex and kill someone. Oh, and he finds Flora outside of Gerard's new home (no forwarding address provided to mom) and steals her back, keeping her locked in a bedroom cabinet and as company while working at night. The classic story is well goosed by the mischievous Chabrol with its symbolic statues, detective story clues (Gerard does not like dogs) and police department pileups, but when the big climax arrives the surprise seems musty. The new romantic figure who may or may not be crazy as a loon and a potential murderer has been well worked over the decades, and Senta is too obviously out there. That's not to say that actress Laura Smet does not cast an alluringly creepy spell (high hilarity in an earnest admittance that in an early experience in acting an actor named Malkovitch told her she made him nervous), but Magimel is more interesting with his elderly customers than he is with her. Cinematographer Eduardo Serra ("The Flower of Evil," "Girl with a Pearl Earring") maintains a steely gray blue palette which casts the proceedings with a tone that is both springlike romance and dank basement and Chabrol fils Matthieu ("The Flower of Evil") has written one of his better scores (Chabrol's actor son Thomas is also present playing a police lieutenant straddling two Tardieu related cases). "The Bridesmaid" is full of classic, creepy detail but modern audiences will likely not be held to the edge of their seats - "La Cérémonie" was far more effective keeping us wondering. Still this is Chabrol, after all, working in the genre he is most identified with and the master's flourishes make this a must see for any fan.

Director Claude Chebral, France’s Alfred Hitchcock, brings us an odd thriller about two people who meet at a wedding. Both appear normal but the title character, Senta (Laura Smet), has some definite anti-social personality issues when she suggests to Benoit (Philippe Tardieu), in order to prove their love for each other, they both commit murder. The problem I have with “The Bridesmaid” is the male half of the couple, Benoit (Philippe Tardieu), doesn’t seem to think that there is anything wrong with Senta, despite the steady build up of wierdnesses the young woman displays. When she tells him, in all seriousness, that everyone should do four things in life - write a poem, plant a tree, have sex with someone of your gender and kill a person – giant warning flags should go up in his head. If it were me, I would have run as fast and far away from this weird broad as possible. Chebral is, of course, a master at his art and is able to hold your interest in spite of the lack of sympathy for Senta and Benoit. He works his actors with skill but the story does not permit the emotional involvement it should have.