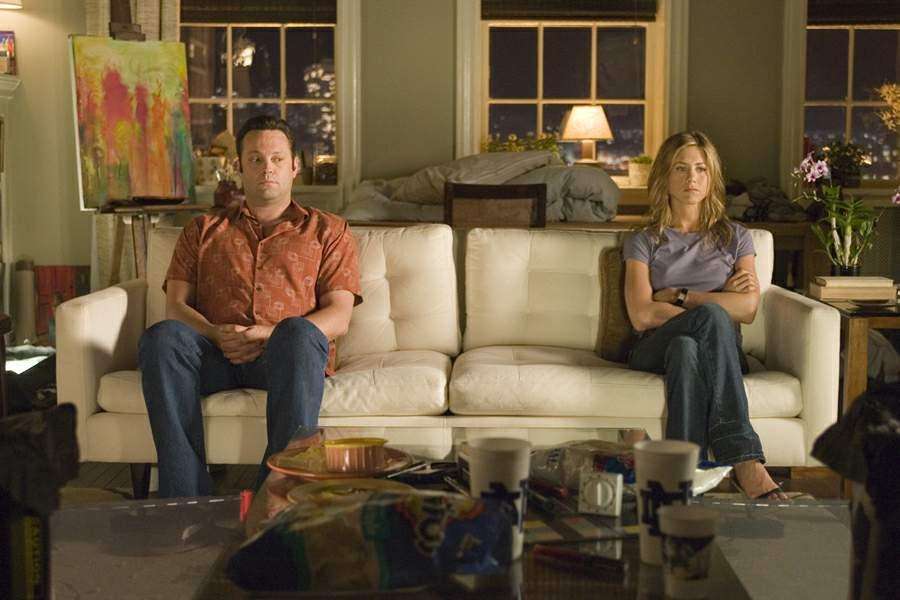 Gary Grobowski (Vince Vaughn, "The Wedding Crashers") isn't fulfilling his girlfriend Brooke's (Jennifer Aniston, "Friends With Money") emotional needs so she dumps him as a wake up call to change his act. But Gary takes her at face value and the two engage in mental manipulation over what they think is real estate, making an endurance test out of "The Break-Up."

You'll probably hear a lot of nay saying about this film, but "The Break-Up" isn't a bad film, merely a mismarketed one. This is not a romantic comedy, nor is it a blackly humorous laugh fest a la "The War of the Roses." What it is is a flawed movie that nonetheless has something to say about romantic relationships and human behavior and the last twenty or so minutes earn some real poignancy. The problem with "The Break-Up" is that it spends too much time spinning its wheels over a premise that doesn't justify its screen time. Brooke is taken aback by Gary's aggressive tactics to get her to give up her share of their condo as she really wants the relationship to work out. But the more she tries to make him jealous, the more he looks like an ass and we begin to question just why Brooke is so intent on keeping him. Gary's the type of social bellwether who never need think of anyone else's wishes because they're usually so willing to go along with his, but this type of personality can eventually wear out its welcome especially in a romantic relationship. This is shown in a scene between Gary and his older brother Dennis (Vincent D'Onofrio, "The Salton Sea," TV's "Law & Order") who are in business together with youngest brother Lupus (Cole Hauser, "2 Fast 2 Furious," "The Cave") running Chicago sightseeing tours. Dennis asks Gary for bus logs so that he can clear the books, but Gary could care less, declaring himself 'the talent.' Dennis peppers Gary with the identical arguments Brooke has just used but Gary does not connect their mutual frustration until his best friend, Johnny O (Vaughn's "Swingers" costar Jon Favreau), makes an off the cuff observation. There are other, smaller problems with the film, like that third act observation which comes after Johnny O has done nothing but Brooke as the bad guy, and the singalong which takes place with the two families meet over dinner (it's come full circle from "My Best Friend's Wedding," also set in Chicago). But then there are the many things it has going for it, like some sharp dialogue (screenplay by Jeremy Garelick and Jay Lavender with a story credit for Vaughn) and some terrific supporting turns. Judy Davis ("Husbands and Wives") is hilarious as Brooke's high strung art gallery boss and Justin Long ("Dodgeball: A True Underdog Story") channels Alexis Arquette as gallery receptionist Christopher. As the film's most unapologetic guys' guys, Favreau and Hauser generate most of the film's real laughs while D'Onofrio spins out one of his odder, yet endearingly sympathetic characters as the bottled up Dennis. Joey Lauren Adams ("Chasing Amy") is largely wasted as Brooke's best friend Maddie. Producer/writer Vaughn's fingerprints extend to the casting of his dad Vernon as Brooke's dad and his hometown of Chicago, celebrated with trips to Wrigley Field, Grant Park, the Magnificent Mile and Riviera Theater. He and Aniston seem as comfortable together at film's start (the relationship is catalogued with still pictures during the opening credits) as they are painfully awkward at film's end. (One must note the irony of Aniston having to promote a film called "The Break-Up" on a week which began with the announcement of the birth of Brad Pitt and Angelina Jolie's baby.) "The Break-Up" is an honorable attempt by Vaughn to articulate the male tendencies which doom heterosexual relationships. It's a sad little Valentine from Mars to Venus.