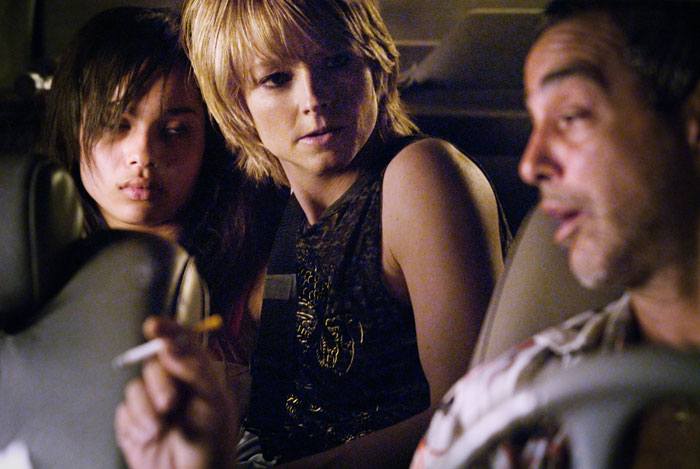 Erica Bain (Jodie Foster, "Flightplan") love of New York makes her ideal for her job as a radio personality reporting on and recording the state of its streets and her love of fiance David (Naveen Andrews, TV's "Lost," "Grindhouse") means that she is a blissfully happy woman. But three thugs in Central Park change all that when she and David are brutally attacked and only she survives, a woman changed intent on revenge in "The Brave One."

Even Jodie Foster has commented upon how much she hates the title of her new movie and it is indeed a misnomer as Erica is fearful throughout most of the film. And Foster gives a searing performance here - her best in years - but one wonders what drew her to this feminist take on 1974's "Death Wish." Sure her female character doesn't revel in her vigilantism the way Charles Bronson did - she struggles with it. And both films are products of trouble times of terrorism that make ordinary citizens feel helpless. But the screenplay by Roderick and Bruck A. Taylor and Cynthia Mort gives its lead characters conflicted motivations and behavior reversals which sink believability. The brutally beaten Erica is observed in the hospital by one of her listeners, Detective Mercer (Terrence Howard, "Hustle & Flow"), there to protect a young girl whose stepfather may have caused the death of her mother. After Erica has recovered, she is so fearful of leaving her apartment she procures an illegal gun and no sooner does she have one that she comes face to face with a killer in a convenience store (indie director Larry Fessenden, having the distinction of being aced by Jodie and bring out his own terrific film, "The Last Winter," in the same week) who she shoots in self defense. Her next victims, though, are more morally ambiguous and when she returns to the scene of the crime with recording in hand, Mercer recognizes her. Bain weakly suggests an interview to cover her presence and is backed into a corner when Mercer accepts. The two form a bond, her professing admiration for his utter belief in the law, while he investigates her crimes and slowly realizes his new friend is responsible. The petite Foster has always been more than believable behind the muzzle of a gun and here, unlike her Clarice Starling for example, she exudes confidence with the weapon quickly even as she alternately exudes emotional fragility and fear. Foster knocks it out of the park when, against her boss's (Mary Steenburgen, "Marilyn Hotchkiss Ballroom Dancing & Charm School," "The Dead Girl") advice, she goes back on the air. She does the unthinkable, giving listeners dead air as she stumbles getting her bearings, but once she begins to speak, her intellectual clarity and poetic way of expressing ideas is riveting - this is the scene that could garner Foster an Oscar nomination. Howard, with his smoke and syrup voice in that handsome, gentlemanly package, is the essence of calm amidst chaos, firm and clear headed. He enjoys nice chemistry with the more fiery Foster. In support, Nicky Katt ("Boiler Room," "Grindhouse") turns in another of his reliably enjoyable character bits as Mercer's blackly droll partner Detective Vitale. Director Neil Jordan ("The Crying Game," "Breakfast on Pluto") delivers a fine production and makes us feel the violence - these are not Hollywood issue killings and beatings. He drives his point home by intercutting flashbacks of tender lovemaking with that same flesh under brutal attack. Sound is well used where the drone of plane (surely a noise to give Manhattanites the jitters these days) during an extended kiss foreshadows doom or where the ping of an elevator signals an alert. But Jordan does not attempt to fix the character reversals that would have Bain declare an end to the rampage which she finds so loathsome only to actually target a man. Worse still is a surprise twist ending that leaves us gaping in disbelief - it throws out the moral compass one character has been following throughout the film, the very thing that has attracted the other central character throughout. "The Brave One" is sullied by sludgy screenwriting, but Jodie and Jordan almost pull it out of the mire. It's a misfire, but an interesting one.