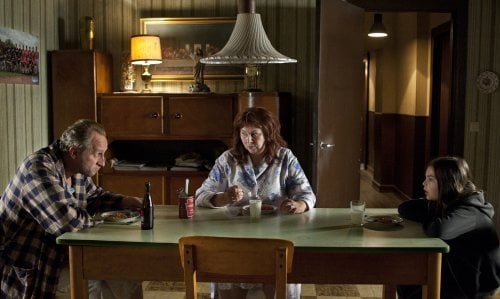 God exists. He lives here in Brussels.' his young daughter Ea (Pili Groyne, "Two Days, One Night") informs us. We see him (Benoît Poelvoorde, "Man Bites Dog") in bathrobe, socks and slippers sitting in a large room walled with filing cabinets at his PC. His first creative efforts involved giraffes walking city streets and cinemas whose patrons are chickens. When he got around to making man in his own image, he set them against each other in his own name. Ea's had enough of her dad's misogynistic meddling, so she first releases humankind's mortality dates, then sets out to find six more apostles with her scribe, Victor (Marco Lorenzini, "Twin Sisters"), who will write "The Brand New Testament."

No one can accuse cowriter (with Thomas Gunzig)/director Jaco Van Dormael ("Toto the Hero," "Mr. Nobody") of not having a vivid imagination. This sly religious satire will delight anyone who's ever wondered how God can allow such misery in the world with its 'All you need is love' feminist coup. From the time that Ea's older brother 'JC' (David Murgia, "Bullhead") advises her to get six more apostles because dad thought there should be enough for a hockey game whereas mom (Yolande Moreau, "Séraphine") thinks there should be enough for a baseball team, to the washing machine portal to Earth that opens into a laundromat, Van Dormael finds laughs and ingenious visuals in every aspect of his film. In the opening section titled 'Genesis,' we learn that God not only instigated war on Earth, but amuses himself by creating disasters like airplane crashes and instituting rules like always being in the slowest checkout line. JC, who's been relegated to life as a statue atop a wardrobe (presumably for going against dad's wishes), admires Ea's pluck - 'To give man awareness of his own death - awesome!' Meanwhile on earth, as people see their clocks tick down, many try to test its inevitability, Kevin (Gaspard Pauwels, "Mr. Nobody") reappearing throughout, his daredevil stunts becoming more and more extreme. After Ea's 'Exodus,' the next six chapters are given to her apostle search. Aurélie (Laura Verlinden, Oscar nominated short "Death of a Shadow") is a beautiful woman who's given up on love because of a missing limb. Jean-Claude (Didier De Neck, "Toto the Hero") is a lonely office drone, Marc (Serge Larivière, "Séraphine") a sex maniac, François (François Damiens, "OSS 117: Cairo, Nest of Spies") a serial killer who gets in on testing mortality. Martine (Catherine Deneuve) is an abandoned wife and the last is a little boy, Willy (Romain Gelin), who wants to be a girl. Ea not only listens to each to find their signature music, but each finds wondrous fulfillment because of her intervention. One falls in love with Xenia, a German (Anna Tenta) who mangles trite sayings into sweet reinventions, another follows a bird to the Arctic Circle. Martine finds love with a gorilla. But Ea's plan doesn't come into full fruition until the inadvertent action of her mother, who, realizing what she's done, makes beautiful music of it. Van Dormeal's despicable God is played with impish, cranky glee by Poelvoorde, while Moreau projects naivety as a shield against his oppressiveness. Young Pili Groyne is preternaturally confident and enlightened. Each of the new apostles, seen in an updated version of da Vinci's Last Supper, progress from downtrodden or unfeeling to fully, joyously alive. Belgium's submission for the 2016 Foreign Language Film Academy Award is a marvel, where a woman sees her disembodied hand dance on a table like the Addams's Thing free of his box or nature astonishes with starling murmuration. "The Brand New Testament" is cheeky, wonderful and wise. Grade:

Heidi Ewing and Rachel Grady do a reversal on “The Lost Boys of Sudan,” where young Sudanese men were given the chance to come to America and escape possible genocide. With “The Boys of Baraka,” it’s American kids who are in danger for their lives in their own city and it is in a foreign land that they may find hope and salvation. The Boys of Baraka” is a solid, chronological bit of meat and potatoes documentary filmmaking that does it by the numbers but has a subject matter that is compelling and interesting. Done mostly with subtitles – the Baltimore boys’ dialect is so strong that they frequent need the visual aid – we learn about the Baraka school and how it was created as a sort of missionary in reverse. The school opens its doors to the downtrodden but redeemable youngsters in one of the worst cities in the US. The film follows the selection process as Richard, his younger brother Romesh, Devon and Montrey, among others, are chosen for the opportunity to get a quality 7th and 8th grade education. Even more important, the school has the reputation for instilling the worth of an education and the desire, when the boys return home, to finish high school and beyond. After the selections are made and the boys receive their all-expenses paid chance for a good education, they are elated with the mysteries ahead. Then, as they pack and prepare for the trip, the reality of the separation from their families sinks in. The kids go through a tearful goodbye with their mothers and siblings – notably, there is distinct lack of father figures at the airport, a telling notation of the black, inner city matriarchal family. No sooner than their plane’s wheels leave the ground does the excitement of the trip take over and the families are, for the moment, forgotten. Then, they land in Nairobi and make the miles long journey to the Baraka School. But, their excitement has been sapped by the long trek and things like herds of elephants go virtually unnoticed by the pooped out kids during the lengthy drive to their new world. As you would expect from 12 and 13 year olds far away from family and friends, homesickness kicks in soon after they arrive at Baraka and, if they could, many of the boys would head for home. Fortunately, kids are pretty resilient and the strange and different new world envelope the boys. As their two-year tour of duty unrolls, missing home and mom become less and less trying. The Boys of Baraka” has a nice arc as it chronicles the trials and joys the youngsters experience during their time in Africa. It is both hopeful and bittersweet as we see these kids get a real, life-altering opportunity only to have to return to the inner city – a year early for the docu subjects as political strife force their tenure to be cut short. Some will overcome their environment while, for others, it is simply coming home to a hopeless status quo. Ewing and Grady show a solid sense of documentary making staying out of the picture and putting the focus on their subjects. Lush lensing and tight editing are pluses for the film.