The Boy in the Striped Pajamas 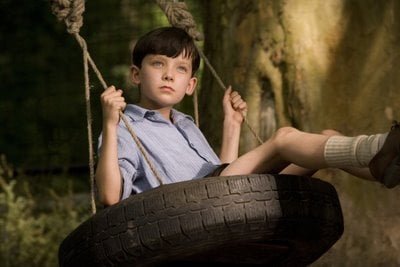 When his soldier father (David Thewlis, "Naked," "Harry Potter and the Order of the Phoenix") receives a promotion, young Bruno (Asa Butterfield, "Son of Rambow") is unhappy about leaving his friends and splendid home in Berlin. Bored out in the country, Bruno disobeys his mother (Vera Farmiga, "The Departed") and goes exploring behind the house, heading toward the strange farm he's seen from his bedroom window before it was nailed shut. His dreams are answered when he reaches a barbed wire fence and makes friends beyond it with "The Boy in the Striped Pajamas."

Director Mark Herman ("Little Voice") had a peculiar balance to strike in adapting John Boyne's children's novel telling a fictional story of the Holocaust, but he has achieved it. By maintaining the perspective on a naive German boy and the conflicting emotions of his extended family, Herman's film articulates the genocide of innocence with a devastating poetry. Bruno is taken aback by his new home. In Berlin he lived in a grand manse of polished woods and rich color, the city's streets his vast playground. His new house is a grey, modernistic cube, stark and enclosed by black gates. He was not supposed to see the 'farm' in the distance, where he is forbidden to go, and it is clear his mother did not expect to have one of the 'farmers,' Pavel (David Hayman, "Sid and Nancy's" Malcolm McLaren), deliver vegetables to her kitchen. When Bruno asks about the strange people who wear pajamas, his father tells him 'those people are not really people at all.' Mother just cautions that they are, indeed, strange. As Bruno's older, 12-year old sister Gretel (Amber Beattie) falls under the spell of her father's driver, Lieutenant Karl Kotler (Rupert Friend, "Pride and Prejudice," "Mrs. Palfrey at the Claremont'), Bruno is even more isolated and asks the Lt. if there is a spare tire to be had. Kotler barks at Pavel, and the old sickly man shuffles out to the shed to procure a tire and makes a front yard swing for the boy. When Bruno spies black smoke billowing in the distance, he stands on it to see better, but tumbles and cuts his knee. Pavel rushes the boy into the house and carefully bandages it, telling the boy he was once a doctor. Bruno advises he couldn't have been much good if he had to 'practice.' Mother returns from town and also notices the smoke and is horrified by what she learns from the driver's crude joke (Nazi officers who worked at camps were sworn to secrecy about their work, even with their families). Awkwardly, she thanks Pavel for taking care of Bruno and begins to slide into a breakdown. When Bruno sneaks beyond the back garden, he finds Shmuel (newcomer Jack Scanlon) and befriends him before Shmuel tells him he is imprisoned because he is a Jew. Later, Herr Liszt (Jim Norton, "Straw Dogs") the tutor will instruct Bruno and Gretel that Jews are evil, but Bruno cannot relate this to his new friend. Bruno is delighted to find Shmuel in his home one day polishing glasses and gives him a cake, but when Kotler catches them Bruno denies knowledge of his young friend. When he next sees him, the boy has been beaten and Bruno is determined to make up for his horrible transgression. Shmuel tells him his father has been missing for days and Bruno decides he will help him find him. Herman has carefully fashioned multiple points of view within Bruno's family. Early on, we see Father advise his own mother (Sheila Hancock, "Yes") to keep her anti-Fascist views to herself, a cause later picked up by his own wife after her eyes are forcibly opened. Notably, Mother emotionally implodes while her mother-in-law takes an outward stand. Grandpa (Richard Johnson, "The Haunting," "Scoop"), however, supports the Fuehrer and chuckles watching the propaganda film shot in his son's camp (Bruno sneaks a peak and starts believing in dad again, after witnessing him doing nothing to save Pavel from Kotler's violence). Gretel is innocence corrupted, seduced by the idea of Kotler and Hitler youth whereas Bruno, having experienced its opposite, cannot be swayed by Nazi propaganda. Kotler, the family insider, is the mirror image of his boss and the first to be punished by the idealism of a family member. The ensemble is very good once one gets over the Britishness of the playing. Thewlis is the only one who gives a Teutonic tint to his accent, Farmiga going the Masterpiece Theater route for hers. It's a bit odd at first, but does at least lend itself to period playing and one eventually stops noticing it. Thewlis is the duty-bound, proud father who blusters when confronted with something other than his clear-eyed vision, evil in the guise of family man. Farmiga moves from tentative, blinker-eyed support to an ashen crumbling when confronted with the truth - her mother is a feeling woman if not a brave one. Butterfield and Scanlon are much the same, their fates determined by the side of a fence. The youngsters are both perfectly natural, as is Beattie, falling for Kotler's Aryan Lt. like a tweener for a Jonas Brother. Hayman conveys the wrecked physical condition and cowed temperament of the elderly Pavel without totally relinquishing his humanity. The production often requires suspension of disbelief. The actual camp is nothing but an electrified barbed wire fence around a great field with a few wooden barracks in the background and it doesn't feel natural that Shmuel would be able to disappear into a hidden corner with a wheelbarrow on a daily basis, but one can forgive these faults as being modeled on a child's perception. In an artistic bit of foreshadowing, Bruno finds Gretel's abandoned dolls piled naked in a corner of the basement - illogical, until one considers the horrors wrought by a child's imagination. Costume designer Natalie Ward uses Farmiga's clothes to accentuate the difference between Bruno's two worlds. In Berlin, she is elegantly dressed in black, white and gray whereas in the stark prison of the camp, soft pastels and florals note her less formal, more emotional persona. Things are no longer so black and white. "The Boy in the Striped Pajamas" is a masterful fable about the promise of innocence and man's capability to crush it. The film's final act reworks known historical fact into something soul shattering.