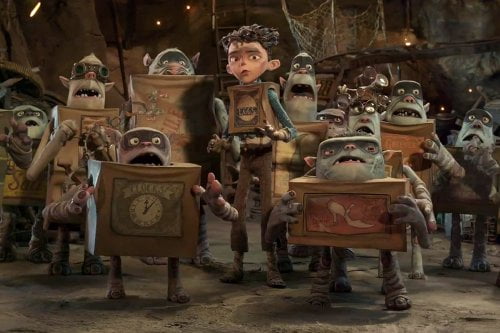 Eggs (Isaac Hempstead Wright) grew up in the world beneath the city, raised by the population of underground-dwelling trash collectors. When the leader of those on the surface hire corrupt and sinister Archibald Snatcher (Ben Kingsley) and his henchmen to get rid of the boy’s extended adoptive family, Eggs must come up with a plan to save “The Box Trolls.”

In the town of Cheesebridge, 'A Gouda Place to Live,' Red Hat exterminator Archibald Snatcher (voice of Ben Kingsley) dreams of the white hats worn by the upper class who spend more time sampling their town's wares than governing. When he confronts Lord Portley-Rind (voice of Jared Harris), he's promised one if he can completely rid the town of its nightmarish blight, the underground dwellers notorious for their snatching of the Trubshaw baby known as "The Boxtrolls." From Laika Studios, home of "Coraline" and "Paranorman," comes their third, most adorably gruesome, macabre stop motion animation to date. Liberally adapted from Alan Snow's 'Here Be Monsters!' by Irena Brignull and Adam Pava and codirected by "Paranorman" story artist Graham Annable and Anthony Stacchi ("Open Season"), we're treated to Laika's inventive and painstaking animation in service to a story with lessons on discriminatory injustice and greed wrapped up with disgusting dining practices and a heroine yearning for piles of bones and rivers of blood! Unbeknownst to the town, that purloined baby is alive and well, brought up by Fish (voice of Dee Bradley Baker) as if he were his own. Fish, so named because of the particular box this troll wears (others include Shoe, Fragile, Sweets and Clocks), is a music loving boxtroll who, along with his kind, crawl out of manhole covers at night to recycle trash into useful mechanical devices. Eggs (voice of Isaac Hempstead Wright, HBO's 'Game of Thrones') thinks he's just another boxtroll until one night, escaping the clutches of the Red Hats, he's spied by Portley-Rind's daughter Winnie (voice of Elle Fanning), who recognizes him as a boy despite his box. The only problem is Winnie cannot get her father to listen to her and Snatcher, designed to look like Ian McShane playing Bill Sykes, has almost completed his nefarious quest. But it's how this fairly basic good vs. evil adventure is told that makes it so much fun. Set in what looks like a steampunk Victorian England with the terrain of San Francisco, it takes a couple of kids to unmask what the adults fail to see (there is only one 'good' adult human (voice of Simon Pegg) in this story, and he's been driven stark raving mad). Snatcher bolsters his agenda masquerading as Madame Frou Frou, who performs annually with 'her' ballad of the Trubshaw baby while setting men's loins aflame. In his Red Hat persona, he's frustrated by the poor command of English exhibited by his henchmen, Mr. Trout (voice of Nick Frost), Mr. Pickles (voice of Richard Ayoade) and Mr. Gristle (voice of Tracy Morgan), the former two plagued by the suspicion that they may not be on the right side. Snatcher is, ironically and obliviously, allergic to the very delicacy that heralds that to which he aspires. The boxtrolls, whose garbled language cannot help but recall Universal's minions, are all unique characters with their own specialities. Fish is musically inclined and in an early trash raid, squabbles for possession of a musical teddy bear which Eggs delightfully responds to in true boxtroll fashion. One is responsible for changing the light bulbs which hang from their underground cave imitating stars (and as Snatcher's reign of terror increases, those lights begin to go out, a charming, melancholy metaphor). The boxtrolls diet of squirmy insects sets up a truly disgusting sight when Eggs, 'disguised' by Winnie as a 'real boy,' is presented with a buffet at a Portley-Rind ball. Word play is delicious ('Curd Way? Milk runs into it.') Cinematic in jokes are sprinkled throughout, from the cheese fixation of "Wallace & Gromit" to a "Sid and Nancy" nod ('Exterminate!'). The whole seems like some warped collaberation between Monty Python and Tim Burton. "The Boxtrolls" is a one-of-a-kind animation that had me giggling for hours after the credits rolled. Be sure to stick around for them as they feature a fast motion view of stop motion animators at work as character voices continue to offer amusing commentary. Grade:

Graham Annable and Anthony Stacchi direct the screen adaptation (script by Irena Brignull and Adam Pava) of Alan Snow’s 2005 children’s book, Here Be Monsters, and the stop motion animation is a genuine work of visual artistry. The story has a familiar feel – a child is raised by benevolent, though not pretty, creatures. The trolls all wear cardboard boxes (emblazoned with their package names - Fish, Shoe, Fragile, Oil Can, etc.) because they are very modest. They raise Eggs with love and care, teaching him music and goodness and raising him as their own. This idyllic life of trash collection and invention (the boxtrolls are very industrious little creatures) is coming to an end, though. The head of the town’s White Hat leaders, Lord Portley-Rind (Jared Harris), has decried that the boxtrolls be eradicated and unleashes Snatcher and his thugs – Mr. Pickles (Richard Ayoade), Mr. Trout (Nick Frost) and Mr. Gristle (Tracy Morgan) – to do the dastardly deed. (Snatcher, by the way, covets the White Hats and wants one of his own and go to great, wicked lengths to get one.) This begins the adventure that will bring Eggs to the surface, where he meets the feisty daughter of Portley-Rind, Winnie (Elle Fanning), who believes all the old stories about the horrible, blood-thirsty under dwellers. He must convince her that the stories are false and enlist the smart young girl in his quest to save his family. Winnie makes the decision to help Eggs and his boxtroll family save the day. The filmmakers marry the outstanding, Ardman Animation-quality stop-mo animation with a terrific vocal cast inhabiting their anime characters – stay through the credits, you will be glade you did. There is a more-than-a-hint of the minions from “Despicable Me” in “The Boxtrolls” but the chattering little characters have their own unique and funny qualities and charms. “The Boxtrolls” deserves a second viewing just to take in all the details the animators so painstakingly create. It is a “for the whole family” kind of film where the boxtrolls’ antics will thrill the kids and the story and beautifully detailed animation will please everyone else.