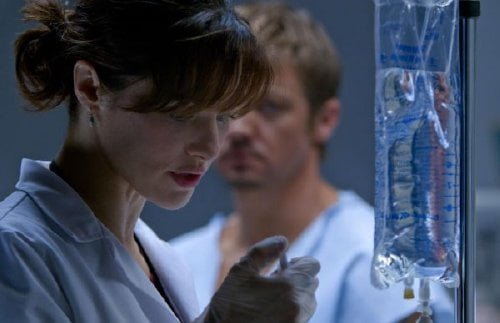 Aaron Cross (Jeremy Renner, "Mission Impossible: Ghost Protocol") is trekking through an Alaskan training program, carefully meting out his blue and green pills, his 'chems,' when some get lost in an accident. He's surprised to run across another man (Oscar Isaac, Weisz's "Agora" costar, "Drive"), perhaps like himself, at a remote station just before they become aware that death dealt from within is on its way because they are "The Bourne Legacy."

Cowriter (with older brother Dan, "Two for the Money")/director Tony Gilroy, who wrote all the previous Bourne films but last directed "Duplicity," is apparently into recycling because "The Bourne Legacy" starts like the last one ended and ends like the second one started. They also try and jam as many actors from the previous films, Damon excepted of course, into the mix, even if it's only for a scene or even a scene within a scene (Universal places Albert Finney's name prominently on their poster only to show him in a YouTube clip being viewed by another character and as a still on a news broadcast.) And yet waste cannot be the motivational factor, as Gilroy's franchise extender widens its net, informing us that the Treadstone program was only one of at least three genetic agent producers. Maybe Universal is looking for their own version of "The Avengers," a Bourne megapalooza featuring rogue agents from multiple top secret government programs joining forces to take down the C.I.A., NSA and the Joint Forces. As Aaron deals with wolves and missiles in the Alaskan wilderness, we find out that Retired Col. Eric Byer, USAF (Edward Norton, "Moonrise Kingdom") has been behind NRAG (National Research Assay Group) and Treadstone all along and with Bourne sightings and the fallout from "Ultimatum" being reported, he's pulling the plug not only on Treadstone, but the new Outcome program, of which Aaron is #5. Unlike Treadstone, these agents are aware of their former identities, but are being genetically modified with drugs. That means that not only the agents, but the scientists behind them, must be eradicated. Dr. Marta Shearing (Rachel Weisz, "The Deep Blue Sea") is one of the scientists who do periodic physical exams of the subjects. She's so jazzed by the science, she's rationalized her participation as patriotic, even though she doesn't know the full scope of the program. But one day at work her colleague, Dr. Donald Foite (Zeljko Ivanek, TV's 'Damages,' HBO's 'Big Love') seemingly goes postal, shooting everyone in a locked down lab before security takes him down. Marta, though, survives, and is on her way to her sister's to get over the trauma when she's paid a visit by clinical psychologist Dr. Connie Dowd (Elizabeth Marvel, "True Grit's" older Mattie) and the F.B.I. Fortunately, Aaron's seen the lab massacre on the news and put two and two together. He arrives on the scene just in time. And so "The Bourne Legacy" is all about medical background and two new rogues trying to escape assassination when their funding's cut. If it weren't for the appeal of Renner and Weisz, who team well together, the film would feel entirely like filler. There's some level of interest in how an Outcome agent is created, sure, but at some point one must wonder just why anyone would get involved in programs sabotaged with lethal force. There are more men on the ground being hunted down by their own than doing anything resembling espionage. The production skips around from D.C. to London to Seoul to a last act in Manila, but as edited by youngest Gilroy brother John, it's often a big jumble, especially at the beginning and end. Director of photography Robert Elswit ("Mission: Impossible - Ghost Protocol") keeps his camera stiller than previous "Bournes," but, considering he shot on 35 mm, gets some awfully unflattering closeups. The most interesting sets revolve around Marta. The pristine lab setting accentuates both its coldness of purpose and resultant horrors. Marta's huge, rural mid-makeover house provides character background and an interesting setting for some hide and seek killings. Manila is depicted as a humid, crowded and dirty, the opposite of its pharmaceutical counterpart. It also hosts, after two hours, the film's big action set piece featuring cars and motorcycles in heavy traffic and it's an incoherent mess. "The Bourne Legacy" is OK when Renner and Weisz interact, but otherwise this franchise might just be 'bourned' out.