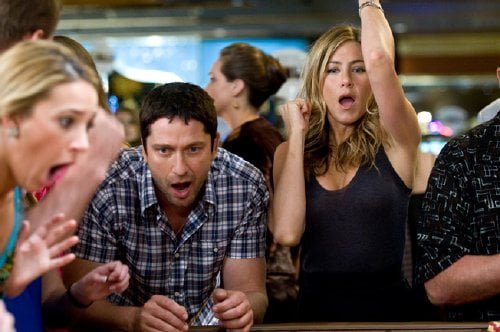 When his ex-wife jumps bail, Milo Boyd (Gerard Butler, "The Ugly Truth") thinks it will be a pleasure to bring her in, but not so fast - investigative reporter Nicole Hurley (Jennifer Aniston) is digging into a murder cover-up and keeps giving him the slip until she ends up running for her life right alongside him in "The Bounty Hunter."

After the appalling romantic comedies "Leap Year,""When in Rome" and "Valentine's Day" that kicked off the year, "The Bounty Hunter" doesn't look so bad, but really, the best thing I can say about it is that it's serviceable. Butler looks scuzzy throughout so that the thought of him having physical contact with the perfectly groomed Aniston is unappealing, at least until he takes his shirt off and shows those chiseled abs. But the film has been well mounted with interesting locations like Atlantic City and Monmouth Park race track, a romantic country inn, a country club and golf course, a Bail bondsman's office, a tattoo parlor and a strip club. Aniston's apartment looks like a magazine spread in which someone on an unlofty budget actually lives. Sarah Thorp's ("Twisted") script keeps multiple story lines and assorted characters crissing and crossing. Director Andy Tennant ("Ever After," "Fool's Gold") stages some different action stunts like Milo chasing an Uncle Sam (Gio Perez, "Be Kind Rewind") on stilts through a parade, Nicole trying to outrun Milo's baby blue Delta 88 on a cycle taxi and a golf cart chase. What makes the "The Bounty Hunter" interesting is a rather large cast of well cast supporting players like Christine Baranski as Nic's larger than life mom Kitty, a nightclub entertainer, "Curb Your Enthusiasm's' Jeff Garlin as bail bondsman Sid and especially the inspired Siobhan Fallon Hogan ("Baby Mama") as Sid's assistant Teresa. There are also rare appearance by Cathy Moriarty ("Raging Bull") as Milo's bookie, Irene, who's on his tail, and Carol Kane as Cupid's Cabin Inn owner (where Milo and Nicole get a very amusing change of clothes after a dunk in a pond). The problem is that all these people are more interesting than the leads. "The Bounty Hunter" continues the dispiriting trend of the romantic comedy genre, but at least it's merely average rather than downright awful. It'll do for some no-brainer entertainment.