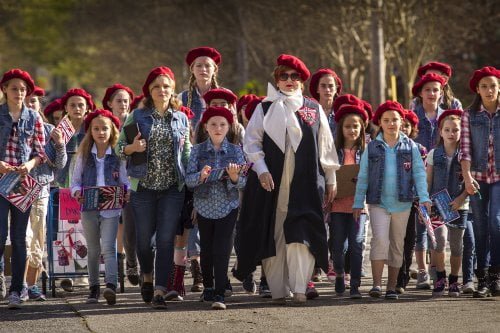 Michelle Darnell (Melissa McCarthy) was once the country's richest woman, but an insider trading felony landed her in bankruptcy and jail. Released, she wheedles her way onto former assistant Claire's (Kristen Bell) couch, but when she falls in with Claire's daughter Rachel's (Ella Anderson, "The Possession of Michael King") Dandelions troop, she finds a new way to be "The Boss."

Well, it's better than "Tammy." By a smidge. But after headlining a solid comedy last year with "Spy," McCarthy's second collaboration with "Tammy" cowriter Steve Mallory and cowriter/director husband Ben Falcone, McCarthy's latest, spun from one of her Groundlings characters, is frustratingly sloppy. On her own, McCarthy, beautifully made up as a fashionable redhead (costumes by "Spotlight's" Wendy Chuck), delivers some well earned laughs, but the filmmakers apparently can't be bothered to ground their plot, jumping from one R-rated gag to the next leaving audience members to question their logic. Just how effective is rivaling a non-profit with a bunch of schoolgirls deemed Darnell's Darlings selling brownies made in Claire's kitchen? Just why is former, still infatuated lover Renault (Peter Dinklage, coiffed in some kind of Justin Bieber mullet man bun) so determined to destroy Michelle? Why would abused assistant Claire trust her former boss with a partnership contract? Above all, how did McCarthy's patented insecure loudmouth build such an empire? Individual bits are funny, such as Darnell's introduction as a child continually returned to the Sisters of Mercy orphanage or as an adult motivational speaker being lowered into an arena in a giant gold eagle shooting sparks. Others, such as having Claire apply teeth whitener while Michelle's mouth is held open with a speculum, an image much like the unintentionally creepy effect of the live lips used in the 60's animated series 'Clutch Cargo,' are overplayed, as is the Japanese sword fight finale. There are plenty of pratfalls, not one but two involving a possessed sofa bed, and dropping f-bombs in front of little girls is always good for a laugh (and yet, somehow, McCarthy pulls these off). A street fight between the Dandelions and Darnell's Darlings features over-the-top funny-shocking violence, but the cars left burning in the street are nonsensical. Kristen Bell is always a likable presence as her Claire is here and Tyler Labine ("Tucker and Dale vs. Evil") adds warmth and humor as her hopeful romantic interest Mike. Margo Martindale has strong presence as an orphanage nun, but Kristen Schaal and Kathy Bates are wasted in inconsequential roles. There is no doubt that McCarthy is a talented comedienne as she provides almost every laugh to be found in "The Boss," but she and Falcone should think about how much higher she could fly with more polished material. Calling Paul Feig... Grade: