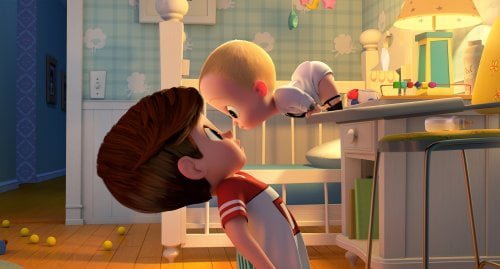 Seven-year old Tim (Miles Christopher Bakshi) has the perfect life. His mom and dad (Lisa Kudrow and Jimmy Kimmel) work at Puppyco and dote on their only child until, one day, things horribly change for the lad. His mother and father have gone behind his back and bring home, without warning, “The Boss Baby.”

If you expect a movie starring Alec Baldwin voicing a baby in a suit to be a parody of our nation's 45th President, you'd only be minimally correct. Adapted from Marla Frazee's book by Michael McCullers ("Mr. Peabody & Sherman"), "The Boss Baby" illustrates how a new baby upsets the rhythms of the Templeton household told from the perspective of the home's prior only child, a seven year-old with an imagination on overdrive. Director Tom McGrath (the "Madagascar" trilogy) envisioned the film as a love letter to his older brother, but his baby boss shares some Trumpian attributes, like his favorite phrase 'you're fired!' When Tim's (voice of Miles Christopher Bakshi) asked if he'd like a baby brother, he politely but firmly declines, much to the amused consternation of his father (voice of Jimmy Kimmel) and obviously expectant mom (voice of Lisa Kudrow). Tim lauds his parents, both marketers for Puppy Co., for always having time for him, especially the 'three stories, five hugs and a special song' he's tucked in with every night (voice over narration by Tobey Maguire). He dreams of wild adventures where he's either saving his parents or they're saving him (the animators differentiate Tim's fantasies with a flatter style resembling hand drawn animation). Tim's life changes drastically when he awakens to the new baby's arrival, watching from his upstairs window as a tiny person wearing a suit and carrying a briefcase marches into his house (a cut to the interior reveals a more traditional baby homecoming, cluing us in on the reliability of our narrator). The house is thrown into turmoil. Then Tim catches the baby talking on his Fischer Price phone about a mission. Spying on a play date with his devised recording device, Tim catches the unbelievable on cassette tape. After an epic battle for the recording, baby takes Tim into his confidence. Baby Corps, where babies come from (except those shunted into management, like himself), is losing ground to Puppy Co., which plans to make a major announcement in Las Vegas. Baby will disappear back to Baby Corps if he's successful, turn into the real Templeton baby if not. Tim quickly gets on board, the two following their parents to Las Vegas to outwit Puppy Co. boss Francis E. Francis (voice of Steve Buscemi). While it may be easy to see where this will all end up, the filmmakers put their pedal to the metal, alternating fantasy elements with Rube Goldbergesque chase scenes. In Tim's imagination, his Wizard alarm clock Wizzy comes to life, his old stuffed Lamb-Lamb becomes a torture victim and Elvis impersonators prove the perfect cover for unauthorized air travel. The Beatles' 'Blackbird' is Tim's 'special song' and repeating musical theme, a lovely lullaby. "The Boss Baby" may not be entirely grown up enough for adults, but it easily trumps last year's "Storks." Grade:

I had reservations about spending my precious Saturday morning (my sleepy time) watching an animation called “The Boss Baby.” Here is what I thought would transpire: Long coddled Tim gets the news about the new, unwanted addition to his family, the story being about his shaded view of the baby. Through Tim’s eyes, the baby is a demanding martinet who rules the roost, but is still just a baby. Director Tom McGrath and scripter Michael McCullers adapt the book by Marla Frazee and take the story I expected and turn it on its ear. The titular tot, voiced just right by Alec Baldwin, is a troubleshooter for Babycorp, whose very existence is put in jeopardy by a disgruntled former employee, Francis Francis (Steve Buscemi). Francis is now the boss at Puppyco and plans to put the baby biz out of business with the introduction of the Forever Puppy. That’s the framework for a more personal story about Tim and his new little brother. The baby is really the boss of the family, wreaking havoc on Tim’s old life and making him cope with a new one. What begins as a sibling rivalry and a battle of wills and wits between the two youngsters becomes a fragile alliance as they bond in a common cause. The result is a family comedy that will amuse and entertain all ages. The bright colors and animated action will amuse the youngest moviegoers, but the sharp humor and snappy dialog will please both parents and non-parents, like me. The characters, especially Tim and Boss Baby, are fully fleshed out and the babies-versus-puppies controversy is handled with a real sense of sibling rivalry for mom and dad’s attention. What could have been a kids’ movie has more impact with combination of genuine child’s issues, like a new baby, and the fantasy corporate world dominated by highly intelligent and motivated toddlers trying to take over the world.