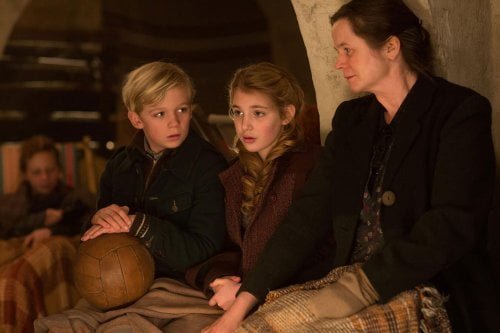 Traveling by train in 1937 Germany, 11 year-old Liesel (Sophie Nélisse, "Monsieur Lazhar") is horrified to see her younger brother die in their mother's arms. After a burial by the tracks, Liesel slips a book she spies on the ground into her coat. With Adolph Hitler's regime having tagged her mother a Communist, Liesel is given to foster parents, one welcoming, the other harsh, and her new schoolmates brand her a 'dummkopf' when they learn she cannot read and write. But Liesel's new Papa, Hans Hubermann (Geoffrey Rush), starts reading that snatched book with her and smitten neighbor boy Rudy (Nico Liersch) calls her "The Book Thief."

The Markus Zusak bestseller has been adapted for the screen (Michael Petroni, "The Chronicles of Narnia: The Voyage of the Dawn Treader") with a worthy cast hamstrung by poor directorial choices (Brian Percival, TV's 'Downton Abbey'). The plummy tones of narrator Roger Allam ("The Iron Lady") as 'Death,' the decision to employ accented English (only Nazi rhetoric is given the subtitle treatment), a treacly John Williams score and choppy, extended denouement all undercut a story worth telling. After Liesel's grim introduction (which is what causes Death to take note of her), she gets a worrisome one from her new 'Mama.' Rosa (Emily Watson) is angered that she will only get one child allowance instead of the expected two, calls Liesel a 'dirty' Communist (the child looks beautiful) and barks an order to get in the house. 'This way, Your Majesty,' says Hans with outstretched hand, his eyes expressing warmth and understanding. Death and words are the film's constant themes, both intertwined in Liesel's new address, Himmel (heaven) Street, and 'The Gravedigger's Handbook,' the first book Hans is rather amused to read with his new stepdaughter. As encouragement, Hans begins chalking a 'dictionary' on the walls of their basement, a place which takes on new connotations when Max (Ben Schnetzer), the son of the Jewish man who saved Hans in WWI, comes to them for shelter. He will be 'The Invisible Man,' the H.G. Wells book which is Liesel's second steal, nudged out of a Nazi book bonfire in the town square orchestrated by Buergmeister Hermann (Rainer Bock, "Inglourious Basterds," "Barbara"). We're cued to sniff danger, though, as Liesel's theft is seen by the Buergmeister's wife, Ilsa (Barbara Auer, "Yella"). But when Rosa sends the girl to their opulent home to deliver their laundry, Isla invites the girl into her library, telling her she can come and read anytime she wishes. After being banned, laundry and all, by Hermann himself, Liesel continues to go, slipping in through a window to borrow books which she reads with Max. Max becomes another great influence, teaching her about how the Jewish concept of life is contained in a word. When he asks her to describe the outdoor day, he won't accept pat weather verbiage, sparking her use of metaphorical language. At Christmas, the first he's celebrated (in a charming scene), he gifts her with a journal - a copy of 'Meinf Kampf,' its original words obliterated with white paint. As Rosa, Emily Watson gives a complex performance, creating a woman made stern by circumstance. Her harsh tongue is known throughout the town, but Watson gradually reveals a tender heart, both for the husband she calls 'saukerl' (filthy pig) and her adoptive daughter, who matures in his image (once Hans is called away in the late days of the war, his comforting accordion playing in the town bomb shelter is replaced by Liesel's story telling). Rush has the easier job as the kind-hearted sign painter, but his work with Watson grows poignant. Nélisse, who broke out in a big way in "Lazhar," is a smart, feisty heroine, although tackling the German accent stilts the natural flow of her dialogue. Ben Schnetzer has a breakout role as the influential Max while the 'lemon-haired' Liersch is open-faced and sweet as Liesel's coconspirator. Barbara Auer has a haunting beauty and casts a melancholy spell as Ilsa, but her character's back story is naggingly vague. Percival achieves decent pacing until his narrator guides us through Liesel's last 75 years which we traverse like a bumpy road complete with stalls and surges. Petroni rearranges the book into a linear time line and keeps its themes intact, but hasn't solved the problem of Death as a narrator - the device should have been excised altogether. Babelsberg Studio and location sets paint a picture of a fairy tale town adored with pristine Nazi flags. We hear more about people's war time suffering than observe it. The Hubermann home is warm and inviting, more spacious and less shabby than their purported poverty would indicate. "The Book Thief" is an old-fashioned film whose sugar should have been cut with a little more grit. Australian director Cate Shortland delved deeper into similar territory earlier this year with "Lore."