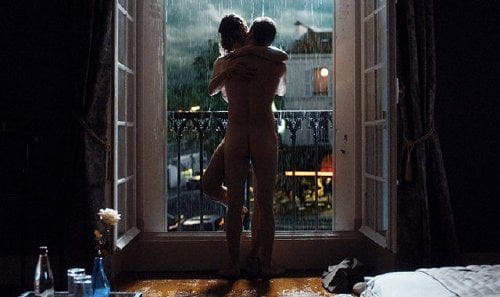 When they were at school together, Julien Gahyde (Mathieu Amalric, "Venus in Furs") thought Esther Despierre (Amalric's wife, Stéphanie Cléau), a cool, tall doctor's daughter, was out of his league. Now Esther's married to his friend Nicolas (Olivier Mauvezin) and Julien is married with a daughter, but they're embroiled in a passionate affair. When Esther asks if he'd like to be with her forever, Julien cannot fathom where his off-handed answer will take him from "The Blue Room."

Writer/director/star Mathieu Amalric's adaptation of the Georges Simenon novel has been much remarked upon for its backwards/forwards structure, but the device has been used before other murder mysteries - the 1997 Tim Roth starrer "The Deceiver" also featured an interrogation in the present flashing back to the events that led up to it. The film has many elements of the work of Claude Chabrol (who adapted two Simenon works himself) - small town bourgeois life with evil undercurrents, a pharmacy - and a score (Grégoire Hetzel, "Incendies") that's reminiscent of frequent Hitchcock composer Bernard Herrmann, but Amalric's work doesn't hit as hard as the masters. Still, this is an enjoyably twisty whodunnit with some intelligently suggestive mise en scene. In just a beat, Amalric signals that something's very wrong. He's in a police station and he's under suspicion. What we just saw in that opening scene is something he's recalling. What did he do? And did he even do it? The story reaches back further to lay its tracks, yet we're still left guessing. Little details, like Julien's daughter Suzanne (Mona Jaffart) looking pale, may have meaning. When asked about his wife, Delphine (Léa Drucker, "Just Before Losing Everything"), Julien supposes he must have desired her, she must have loved him. So what went wrong? Amalric sets up a couple of bang up pieces - one in which his wife stands on a ladder in the living room surrounded by open space and glass, another in which he splits his screen, 'his' side backgrounded by falling snow, 'hers' by the warm blinking lights of a Christmas tree. The unravelling of the mystery provides a jolt or two, but Cléau's so cool from the start, it's difficult to empathize with Amalric's passion.