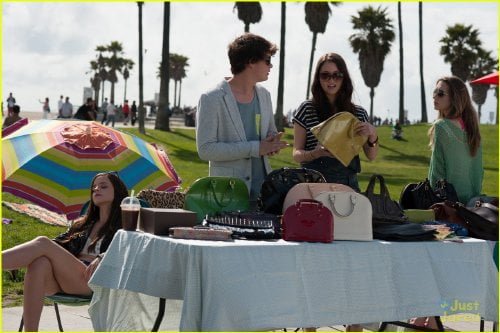 It was July 2009 when Rebecca (Katie Chang) and Marc (Israel Broussard) became best of friends. Rebecca, a thrill seeker, takes Marc on one of her missions to break into the expensive luxury (and unlocked) cars parked on the streets of Beverly Hills. Soon, though, they graduate to finding ways to break into such celebrity homes as Paris Hilton, Lindsay Lohan and Orlando Bloom. Their numbers soon swell and they become known to the world, and the police, as “The Bling Ring.”

In the L.A. suburb of Calabasas, new age mom Laurie (Leslie Mann, "This Is 40") wonders just how late her daughters Nicki (Emma Watson, "The Perks of Being a Wallflower") and Sam (Taissa Farmiga, "Higher Ground") came home the night before, then doles out their Adderall like multi-vitamins before their home schooling session. Meanwhile, at nearby Indian Hills high school, Rebecca (Katie Chang) takes an interest in new kid Marc (Israel Broussard, "Flipped") who's thrilled to be noticed by one so lovely and together. Marc's freaked out when his new bestie decides to visit Paris Hilton's house while the celeb is out of town, guessing accurately that she's the type to leave a key beneath her mat, but it brings out his inner stylist. When the kids all meet up at an L.A. nightclub, they decide to do it again, this time including Nicki, Sam and Chloe (Busy Phillips lookalike Claire Julien). When they begin to branch out, blatantly 'shopping' at homes around the Hollywood Hills the media tags them as "The Bling Ring." Writer/director Sofia Coppola ("Lost in Translation," "Somewhere") has spent her career observing the lives of those outside the realm of the everyday, usually the rich and famous. Her seemingly straightforward adaptation of Nancy Jo Sales's Vanity Fair article "The Suspect Wore Louboutins," has a sly message about America's celebrity culture, a food chain subtext that equates the kids with their quarry (most obviously in her introduction of Lohan with news footage regarding her own alleged theft of a $25K necklace). If these well off kids felt entitled enough to pick off the designer duds and jewelry of those they admired, those celebrities apparently felt immune to something as common as theft, the break-ins more like walk-ins. Only a trip to Brian Austin Green's, where Megan Fox's wardrobe lives, requires an unusual approach - finding someone small enough to enter via the dog door. Coppola could have gotten even more bang for her buck had she folded in the reality TV parallels, Nicki's real life counterpart, Alexis Neiers, having been the star of 'Pretty Wild,' just as one of their victims, Audrina Partridge, who released her home surveillance video showing the theft to KTLA, was in 'The Hills.' But except for changing names and collapsing time, she sticks pretty close to the article content, including its subject's outrageous quotes. Marc is the least venal of the group, looking more for acceptance, even if his and Rebecca's first hit is at the home of one of his acquaintances, an escalation from 'checking cars,' where unlocked luxury vehicles parked in their own neighborhoods would regularly supply credit cards, cash and even drugs. Broussard makes Marc an unassuming kid ('I knew I didn't have A list looks') who wanted out of the targeted homes almost as soon as they entered. Chang paints Rebecca as a cool customer whose goal in life is to have her own line and fragrance. Chang is the essence of pretty vacant, making Marc's devotion pitiful. Watson is hilarious as the offspring of deluded Hollywood types, intent on fame, back-pedalling into beauty contestant banalities to explain her behavior. Farmiga is blossoming into quite the actress, her humorous depiction of Sam as a magpie of leopard-print turning scarily reckless when a hand gun is found. And while she's been delivering the same note for husband Apatow, Leslie Mann finally shows some range as the deluded mom whose group incantations are the answer for everything. Coppola's production is fascinating. Using Hilton's real home, the director unveils aspects a bit at a time, until an unusually large group goes and finds Paris's jewelry stored in a separate room within her shoe room, like the opening of Ali Baba's cave. The raid on Partridge's modern, glass sheathed home is shown in a static shot from the hills, "Rear Window" with cool remove. The director accentuates the shallowness of these kids' lives with their frequent clubbing, consisting of posing for their own phone pics raising glasses attired in others' finery, some mere feet away. She uses 'Kate' (Annie Fitzgerald) from Vanity Fair and news media for the trial to give her celebrity stalkers the trappings of same. But although Coppola's direction of individual scenes is dynamic - making us sweat as Farmiga plays with a handgun, cringe *and* giggle as Watson imperiously swats away Mann's comments during an interview - the film as a whole feels curiously mundane. It's as if she's done too good a job, the emptiness of her subjects infecting her tone. It is of note that two of Hollywood's most famous directors now have children examining the cult of fame. David Cronenberg's son Brandon attacked celebrity worship with his original sci-fi/horror treatment "Antiviral" earlier this year. Francis's daughter takes a more straightforward approach with "The Bling Ring," and they'd make a bang-up double bill.

It took me a while to cotton on to helmer Sofia Coppola but she has worked very hard over the years to hone her directing and filmmaking skills. “The Bling Ring” is the culmination of that hard work as Coppola adapts Nancy Jo Sales’s 2010 Vanity Fair article that brought the titular gang of break-in artists to national attention. The result is an efficient, based-on-fact film that tells the Ring’s story, a story that resulted in over $3 million worth of celebrity bling in the form of jewelry, designer clothing, expensive shoes, sunglass collections, cash, luggage and anything else that struck their fancy. Coppola’s adaptation of Sales’s original article is accurate (though the names are changed) and tells the Ring’s story effectively with little slack. One sequence, with Marc watching himself dance on his computer, lasted too long and conveyed little. But that one minor complaint does not ruin the movie. The terrific cast is a true ensemble and each member of the ring has a unique personality and all the characters are suitably narcissistic and self-centered where their frequent raids on celebrity homes draws them to the brightest and shiniest bling. “The Bling Ring” is an excellent piece of story-telling about an almost unbelievable crime spree. Ultimately, there is no honor among thieves.