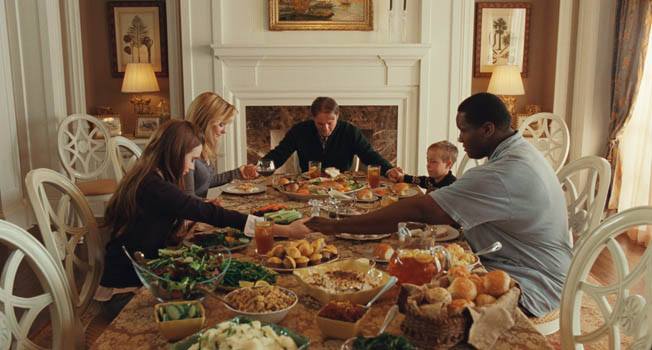 Basically homeless, Michael Oher (Quinton Aaron, "Be Kind Rewind") was helped into a privileged Memphis Christian school by the father of a friend and Coach Cotton (Ray McKinnon, "Come Early Morning"), who was determined to get 'Big Mike' into his fold despite the kid's 0.6 grade average. After seeing her young son S.J. (Jae Head, "Hancock") talking to the big, black teenager, Leigh Anne Touhy (Sandra Bullock, "The Proposal," "What About Steve") noted him out on a cold night wearing only a t-shirt and before he knew it, Michael had been hit by Leigh Anne on "The Blind Side."

There will be those who declare "The Blind Side" another liberal white guilt movie like "Precious," but unlike that film, "The Blind Side" tells a true story. More the problem is how that story, adapted from the Michael Lewis book by director John Lee Hancock ("The Rookie," "The Alamo"), is told. In "The Blind Side," the Tuohy family are both wealthy Republican conservative material consumers and angelic do-gooders who never experience conflict of any kind and Michael Oher is a kindly gentle giant who scores a 98% for protective urges and whose 80 IQ doesn't stop him from becoming a B+ student when a little interest is taken in him ("Precious" again). To all this gooeyness, add Sandra Bullock made up to look like Kathie Lee Gifford with too much pancake on and the overall result is, well, just a bit off putting. The film begins with Bullock narrating some facts and plays over real footage of Oher in action, making a tackle to protect his quarterback's blind side before segueing to Oher's introduction to Wingate Christian School. Despite his unknown age and dubious scholastic record, Mrs. Boswell (Kim Dickens, "Things Behind the Sun," "Thank You for Smoking"), the science teacher, begins to notice that although he barely speaks or participates in class, Oher is indeed slowly absorbing class material. When Oher attempts to talk to two little white girls on swings, they run (the scene is reminiscent of "Frankenstein's" misguided attempt to play), but the effervescent S.J. advises the big guy to smile (Oher/Aaron has such a perpetual frown on his face, it's curved a visible 'C' into his forehead). Then S.J.'s mom gets her hooks into him and he gets a new wardrobe, room and a bed, the first he's ever had. Oher's pride initially resists, but when he has Leigh Ann take him to his crack addicted mother's home in the projects, he discovers the apartment has been evicted. (Later, seeking legal guardianship, Leigh Ann tracks Denise Oher (Adriane Lenox, "Black Snake Moan") down and has such a dignified conversation with her one wonders when tea will be served.) Leigh Ann rejects her ladies-who-lunch group after one asks if she's afraid to house Oher under the same roof as her pretty, cheerleading daughter Collins (Lily Collins, daughter of Phil), then asks Collins (who names a baby girl Collins?) if she's OK with things (Collins has been so OK with things that at one point it seems like she's flirting with her new big brother). Former basketball star and current fast food restaurant magnate Sean Tuohy (C&W star Tim McGraw, "Flicka") affectionately rolls his eyes at everything his bossy wife does, including calling Coach Cotton on his cell phone during a game. It's Leigh Ann, apparently, who is responsible for Oher's field success as well, as only she could determine the proper way to coach him - by accentuating that protective instinct. If Michael thinks of his teammates the way he thinks of his new family, the opposition is toast. Hancock obviously has a thing for underdog stories, but here he has forgotten to give his protagonist opposition. The Tuohys buy Michael a brand new truck (by which point in the movie Aaron's face just lights up like Christmas morning, gone the urge to reject charity) which he promptly totals with S.J. in the front seat. Does Leigh Ann get mad? Of course not! So long as her two boys are safe, an accident's an accident that could happen to anyone (oddly, it is clearly portrayed as Oher's fault). Oher is first given shelter on Thanksgiving Eve. The next day as the Tuohys pile up plates of their catered feast and plop in front of televized football games, Oher, having seen the Norman Rockwell version on the cover of their own coffee table book, makes an example by sitting at the dining room table. The only conflicts that comes up are of external forces and are immediately resolved with Tuohy ingenuity. Bullock has conviction in a not terribly convincing role (in a televized interview, the actress admitted to having difficulty getting a bead on Tuohy - I got the impression she didn't like her very much). Those declaring this her best performance should go back and rewatch "Infamous." Everyone else sings mostly one note, especially Aaron who stops short of scratching the dirt with pointed toe. Gentle giant, indulgent husband, plucky youngest son, etc. Kathy Bates ("Misery," "Chéri") is the mischievous ('I'm a Democrat!') private tutor (maintained through college!). Kim Dickens has stronger impact in the dedication derby. "The Blind Side" certainly had its heart in the right place, but in order to have a shred of believability, it needed more grit. The Tuohys are cardboard saints with a big bank account and Oher is their big lump of clay.

17-year old Michael Oher (Quinton Aaron) is hungry, homeless and alone with little hope for a better life. Then, two things happen. His raw athletic ability comes to the attention of the coach at an exclusive private school and his pathetic life draws the kindness of Leigh Anne Touhy (Sandra Bullock). These attentions will have a far-ranging impact on the young man’s life in “The Blind Side.” Helmer-scribe John Lee Hancock, adapting Michael Lewis’s true-life inspirational biography about Michael Oher,, creates a nice, schmarmy, manipulative, clichéd and sentimental movie that is better than it has a right to be. The reason for this falls squarely on Sandra Bullock who, single-handed, makes “The Blind Side” good entertainment. The actress imbues life and dimension to the character of Leigh Anne and readily dominates the rest of the largely two-dimensional cast. Big Mike is a taciturn young man of few words as he is admitted to the private, prestigious Wingate Christian School to be, hopes Coach Cotton (Ray McKinnon), a ringer for the school’s football team. However, in class, Michael shows no interest in any subject, making his teachers believe that he is learning challenged. One teacher, Mrs. Boswell (Kim Dickens), sees the young man’s potential and stands up for him with the rest of the staff. She is, eventually, proven right. Leigh Anne has seen the mountain-size teen on campus when she drops off her children, Collins (Lily Collins) and SJ (Jae Head), at Wingate. He is little more than a curiosity to the well-to-do sports mom until one cold, rainy night when the Touhy family pass him on a dark, lonely road. Leigh Anne insists that her husband, Sean (Tim McGraw), pull over. She questions the shivering, underdressed youth and learns that he has no place to go but the school gym where “it’s warm.” The strong willed mother of two brings Michael, as he wants to be called, to their home to put him up for the night. One night turns into many as the Touhy family treat Michael as one of their clan, even seeking his legal guardianship. The kindness of strangers is the catalyst that transforms Michael from the silent, brooding young man to the intelligent student and football star. Because of his acceptance into the Touhy family, the teenager is able to rise above his roots as an abandoned and homeless boy to become a star tackle at Ole Miss, freshman All American and first round draft pick in the NFL. This is an inspirational based-on-a-true-story tale, though, that is bound in cliché, telegraphing the heart-warming moments (which would not be so heart-warming without Sandra Bullock) with little subtlety. When you see Leigh Anne observing Michael and youngster SJ reading children’s books at Borders, you know that, soon, there will be a scene where she reads them a bedtime story (which happens to be about another little loner named Ferdinand the Bull). She does. If not for Sandra Bullock, and a very amusing performance by Jae Head as wisecracking wheeler-dealer SJ, “The Blind Side” would have drowned in its own mediocrity. Fortunately, Sandra’s star power and acting skill rescue the film.