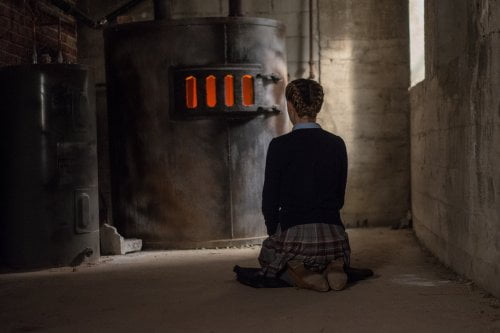 As the Catholic girls of The Bamford School get ready for their February break, freshman Kat (Kiernan Shipka, TV's 'Mad Men,' 'Feud') frets when Father Brian tells her he will miss her performance at the school's closing gathering. Meanwhile senior Rose (Lucy Boynton, "Sing Street") believes she might be pregnant. The two both end up in the headmaster's office when neither of their parents have arrived to pick them up. Left alone in the facility with two female staffers, Rose begins to get spooked after she finds Kat prostrating herself in front of the school's basement furnace in "The Blackcoat's Daughter."

The son of "Psycho" himself, writer/director Osgood Perkins, rejuvenates the 80's slasher film with an art house template, a slow build soaked in atmosphere delivering serious creeps. His brother Elvis provides the film's (previously titled "February") invaluable original music, goosing chills with twangy chords, high-hat riffs, Lynchian industrial moans and the original murder ballad Kat performs to piano (its lyrics used for the new title). "The Monster" cinematographer Julie Kirkwood creates literal chills with her frosty imagery, editor Brian Ufberg deftly switching timelines while delivering shocks with abrupt, startling flashbacks. Rose has been tasked with keeping an eye on the younger girl, but claims illness. That night, as she gets ready to meet her boyfriend to deliver her news, she tells Kat a school story about two sisters without a trace of hair on their bodies found in the act of devil worship. Meanwhile we see Joan (Emma Roberts), who appears to have gotten out of a mental hospital, use her last two quarters to call a disconnected number from a bus station payphone. Noticing the bedraggled girl shivering on a bench, Bill (James Remar, "The Warriors") offers a ride. His wife Linda (Lauren Holly, "Dumb & Dumber") isn't happy about it and we see Joan react when Bill says they're headed to Bamford. To say anything more would reveal too much. The three lead actresses give strong performances, Shipka convincing us that Kat is barking mad. Remar and Holly keep us guessing, their opposing emotions adding to the sense of dread. Watch for small details, like the anatomy chart seen over Kat's shoulder as she sits in the nurse's office. There is a reflection seen in a communal bathroom's tiles that has stayed with me days after having seen the film. The horror genre has been on an uptick, beginning with last year's "The Witch" and "Krisha" among others. 2017 has already delivered a number of better than average genre titles but, like "The Blackcoat's Daughter," most have bypassed theaters for VOD release. ("The Blackcoat's Daughter" is currently airing on DirecTV, hitting VOD on 3/31.) Grade: